Chief Seattle the Native American said this perfectly, "All things are connected. Whatever befalls the earth befalls the sons of the earth. Man did not weave the web of life; he is merely a strand in it. Whatever he does to the webs, he does it to himself."

Saving a life is like saving the whole humanity says the Quran, a book of guidance like all other holy books in building harmony in a given society. It is about building societies that care for each other for the ultimate benefit of each member of the society. 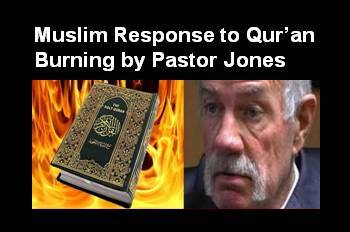 Qur'an, Chapter Al-Ma'idah (The Table Spread) 5:32 (Asad) "Because of this did We ordain unto the children of Israel that if anyone slays a human being-unless it be [in punishment] for murder or for spreading corruption on earth-it shall be as though he had slain all mankind; whereas, if anyone saves a life, it shall be as though he had saved the lives of all mankind. [40] And, indeed, there came unto them [41] Our apostles with all evidence of the truth: yet, behold, notwithstanding all this, many of them go on committing all manner of excesses on earth."

Indeed every religious, political, ethnic and social group has a fraction among them that commits excesses. Individuals are responsible for the bad acts, and it is their heinie that needs to be hauled off, and not their parents, kids, siblings, pastor, religion or mayor of the town. We have to guard ourselves from stereotyping any group for the acts of a few.

About 10:00 in the morning of Tuesday, September 11, 2001, this Muslim was called in by AM Radio 1150 to address the chaos that followed after the first plane hit the twin towers. The great tragedy had left every one speechless and had frozen everyone from doing anything. I was shaking but was committed to make sense out of the chaos and bring coherence to the day, and pave the way for relevant action.

I was on the air for seven hours, virtually getting every possible community, religious, and civil leader on the air to bring some coherence. Among the many things we accomplished that day was the blood drive. My late wife Najma had called in and announced about the blood drive and within no time, hundreds of people lined up at Wadley Blood center. She drove to the facility and the folks told her that the lines were too long and asked us to hold off the announcements till the next day.

Thanks to OneBlood, Inc. for sending the Big Red Bus to the Mulberry Civic Center Venue on September 11, 2013 between 8:00 a.m. and 11:00 a.m. -- please come and donate blood. I realized the importance of blood donation when my late wife was on her death bed and needed blood, when my uncle was in a motor cycle accident and needed blood. Donate blood.

The Muslim community has taken up the responsibility in past several years to donate blood, and last year, the target was to collect 11,000 pints on the 11th anniversary and they collected 11,170 Pints. The Muslims for Life blood drive campaign emphasizes the sanctity of life, a teaching inherent in all religious traditions. The Muslim community has set a goal to collect 12,000 pints of blood, which will help save up to 36,000 lives.

Please join us for a life changing event, you will fall in love with the idea that all of us Americans will come together as Americans and nothing but Americans. While we have our identity, we look to each other as American and rededicate ourselves to our pledge; one nation under God with liberty and justice for all.

You will be a part of history in creating a model behavior in dealing with conflicts and building a cohesive America, where no American has to live in apprehension or fear of the other.

Mike Ghouse is committed to building a cohesive America and offers pluralistic solutions on issues of the day. More about him at www.MikeGhouse.net