It was June 2015. At a dark and lonely train station on the border of Macedonia and Serbia, a humanitarian tragedy was unfolding.

Thousands of men, women, and children--people of all faiths from the Middle East--were fleeing the horrors of war.

Often bereft of any last possessions but a backpack, a cell phone, and perhaps a bit of bus money, these civilians had once been well off, even affluent, but had lost everything.

If they made it past the missiles at the borders of Turkey, if they made it across the sea without drowning in their attempts to reach the shores of Europe, if they made the long journey north through Greece, they arrived in Macedonia. From there they hoped to make their way to Western Europe to find safety and asylum.

The trains they arrived in were crowded, damaged, and dirty. At the station where they disembarked, there was no aid organization, no shelter, and no one to offer directions to their next destination. Refugees often got lost in the open wilderness.

And that was when Team Studeničani appeared. 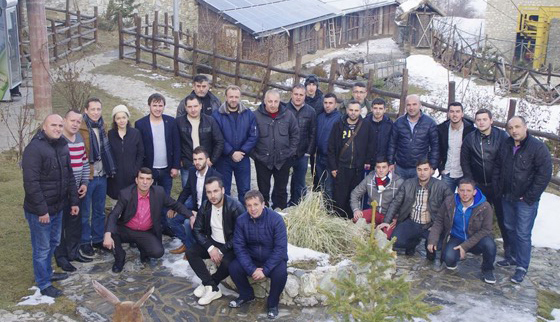 It all started when Suat, a local man from the nearby village of Studeničani, visited the station one day. When he returned home, he told his friends what he had seen. One by one, they visited the station as well, and saw the human tragedy before their eyes.

One of his friends was Naip, a local window installation professional.

"I saw a pregnant woman sleeping in a toilet stall," Naip told me, holding back tears. "I couldn't take it. I had to do something. And one day, I brought my two-year-old son with me. He saw a refugee boy his age, shivering with cold, and gave his jacket to him. I couldn't believe my eyes! Even a two-year old could sense the desperation of the refugees at the station."

And so, the team formed--a group of renegade humanitarians who would not stand by and watch the suffering of their fellow man.

Night after night, when their day jobs were finished, they showed up. They escorted refugees through open fields to their next destination, carrying flashlights, babies, and bags. They built makeshift bridges over rivers. They constructed wood stoves from barrels, to keep people warm. They made ponchos from nylon sheeting to conserve costs.

Hfz-fati, a devout Muslim who has memorized the entire Koran, was a part of the team from the beginning.

"We help all refugees," Hfz-fati told me. "It doesn't matter what their religion is--Christian, Jew, or Muslim. They are all our brothers. They are all humans, and they deserve our help."

Why did these men do this? Why did they give up their off-hours to help thousands of strangers who didn't even speak their language?

"When you see it in front of your eyes, it's different," said Orhan, another key team member. "It's different from reading about it, or hearing about it. You see it. You can not sit by and do nothing." 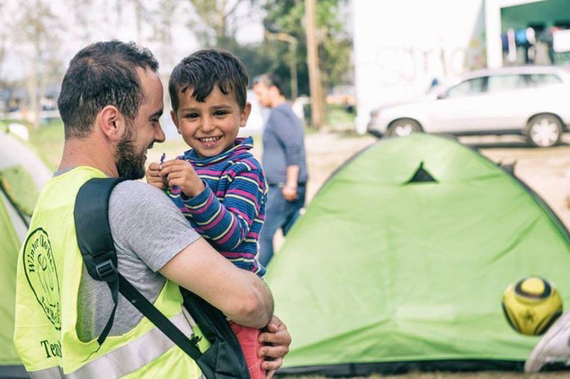 And so it went. Month after month, night after night, Team Studeničani was at the border camp, providing support.

Over time, other humanitarian aid organizations began to appear and offer help alongside the team.

But Team Studeničani had a special reputation. 100% unpaid, 100% volunteer, their work came from the heart. Often the first to arrive and the last to leave, they set the example for the rest to follow.

To miss the arrival of a refugee train was unthinkable, even if it meant staying at the camp all night to wait--and many a visitor has told stories of these men walking around the camp barefoot, having given their shoes away to refugees.

"One night in October," Naip told me, "it was raining so, so hard. There were thousands of people without shelter. We gave out every poncho we had. Then we gave away our own jackets, but there were still many people shivering and wet. I got into the car with Suat, and closed the door. We sat there for a moment, trying to think. I turned around and saw a tear in Suat's eye.

"Then my phone rang.

"'Are you Naip?' a voice asked in Albanian.

Naip was shocked. Sure enough, a few hundred meters away, someone had dropped off thousands of ponchos for them. They never found out who their anonymous donor was, but every refugee got a poncho that night.

In November 2015 I became one of the luckiest women in the world when a chance encounter introduced me to Ziko, a key member of Team Studeničani. That night I visited the camp and worked with the team. We joined forces, founded Winter Clothes for Refugees, and spent the next months at the station together, putting warm clothing on shivering human beings. Eventually we formed a 501(c)(3) nonprofit organization, Charity United, which provides refugee aid to this day.

But without Team Studeničani, it never would have happened. 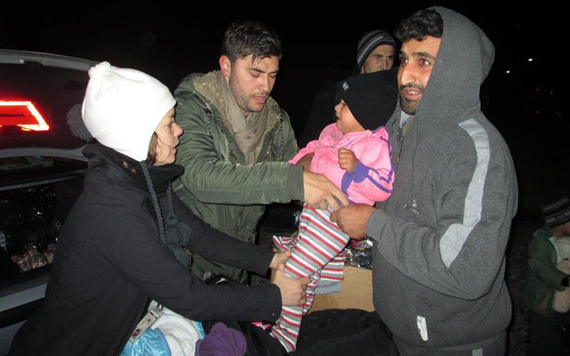 It's now nearly a year later. Team Studeničani has never abandoned its task. They are on the ground regularly, not only in Macedonia but also now in Greece, distributing food, clothing, and vital supplies to refugees.

It is times like these that we learn that the world is full of good people--and team Studeničani may be one of the best examples I have ever known.

Learn more about Charity United and Team Studeničani on Facebook, or at CharityUnited.us.