WASHINGTON -- Americans are seeing new signs of economic optimism, but their views of their own finances remain comparatively bleak.

Views of the economy are at a post-recession high, and more people are finding jobs, but new HuffPost/YouGov polling shows that most have yet to see positive change personally -- and that for many Americans, especially those in working-class households, money continues to be a significant source of stress. 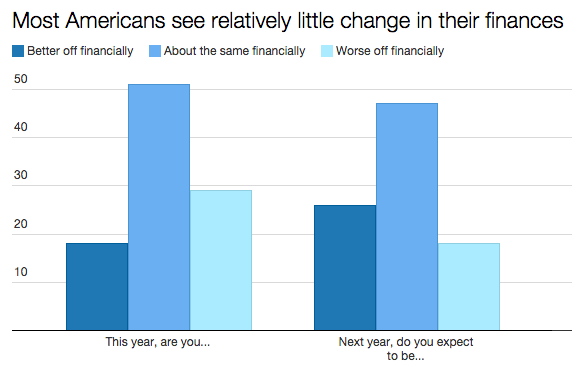 While other surveys show substantial recent improvement in perceptions of the economy, the fraction of Americans who have seen personal improvements are reluctant to see the change as a part of a broader trend.

Among people who said their own situation was better, just 39 percent credited an improving economy as one of the factors behind the improvement. Forty-six percent named their own hard work, while others credited luck, help from friends or family, or a specific event like a new job or a raise.

"I think in some areas, the economy's doing better, but at the same time, there's still a lot of people struggling and still recovering right now," said Kelly Lingo, a 23-year-old in Fresno, California, who found a full-time job this year thanks to family connections and previous work experience. "And I think that our situation is kind of a stroke of luck."

"It's still sort of 'take it as it comes,'" said Vanessa Powell, a former Goodwill warehouse worker who recently landed a new office job that makes better use of her MBA. While she feels considerably more secure this year, she's still struggling with student loan payments, and concerned about the work prospects for her fiance, whose fast-food job is closing at the end of the year. Though she's getting married next year and would like to have children eventually, she said she's not ready to start discussing it.

"Honestly, I wouldn't even feel comfortable fostering a kid in my current economic situation," she said. "I mean, it's great that one of us is making more than the minimum wage, but until the other one is too, I really don't see how we could afford it."

Tight finances have also meant the need for more immediate cutbacks and compromises among most lower-income Americans. Seventy-one percent said saving money was at least something of a factor in their holiday plans, and 42 percent called it a major factor.

Three quarters of lower-income Americans said they had put off some purchases this year to save money. Nearly a quarter said they'd delayed seeking medical care, while 59 percent said they'd held off on buying new clothes or personal items, and 41 percent hadn't taken a vacation or other time off. About a third had put off maintenance around their homes, and 27 percent had waited on car repairs. 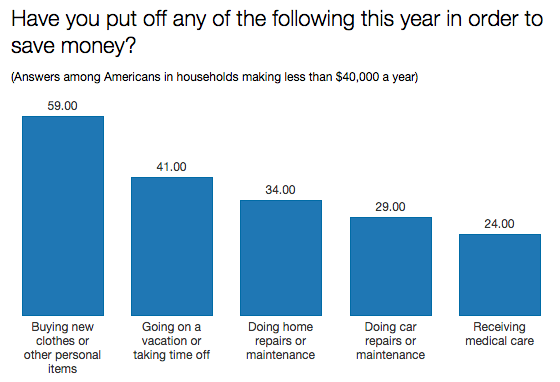 Joanne Van Vranken, who lost her salaried job three years ago, watched her 401(k) dwindle to nothing, while her eventual to-do list accrued.

"No repairs have been done around the house in years. We have leaking toilets, leaking faucets, leaking sinks. My car has needed some serious repairs. New brakes, new suspension, it needs a timing belt. I have not had the money to do any of those things," she told HuffPost last year. "One of the leaks is the hot water in the bathroom. So we have to keep it turned off. We just use cold water. If we want hot water, we go to the kitchen. Washing your hands in cold water or washing your face in cold water, it's not fun."

While she's recently found a temp job that makes enough money to begin saving again, she and her husband are remaining cautious with their finances.

"I would think it's going to take us at least three to six months to start feeling really comfortable and at least a year to be to the point where we're confident enough to maybe do things like look at buying a new car or do major household repairs," she said in December. "In the meantime we can probably do things like get the plumber in and stuff like that, but there's still things, like, we need a new roof. We need to wait until the finances are on a much more stable footing."

While Views Of Economy Improve, Struggles Remain For Many Americans
John Boehner's Lips Are Sealed