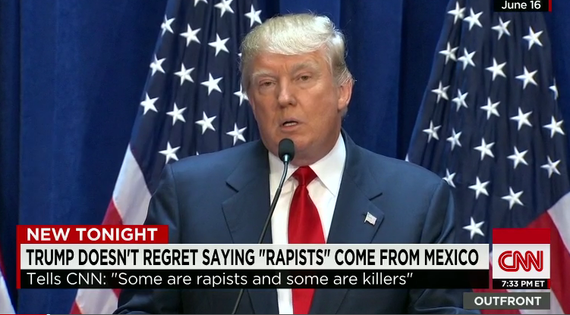 Donald Trump isn't all that popular amongst my Native brethren.

For that matter, most of my brown-skinned contemporaries have been very consistent and very passionate about their dislike of Donald Trump. And why wouldn't they be? Not only is his hair hilarious, but he also famously called for the banning of any new Muslim immigrants into this nation, he's also called for the round-up and deportation of 11 million women, men and children who are in this nation unlawfully. Moreover, he suggested that the beating of a Black Lives Matter protestor was justified at one of his rallies and also hinted that Hillary Clinton would make a bad president because she couldn't satisfy Bill Clinton (FYI, I also think she'd make a bad president, but for different reasons). And in regards to Native people, he did the typical entitled white man thing to Native Americans by thinking he could think for us and speak for us and didn't even consider our actual opinion about things that concern us.

Damn, then which group of brown people has he not went out of his way to be a scumbag to? In the immortal words of Phife Dawg, "Believe it or not, they all got done." The Donald seems to have a serious dislike of all brown-skinned people and doesn't seem too fond of women, either.

Ok then, why would someone write about the things that they should be thankful for Trump, Ross? Are you a self-hating, Uncle Tomahawk Native like those black preachers who posed with Trump or the "Latinos for Trumps" group who support the Donald in spite of him saying that "When Mexico sends its people, they're not sending the best...they're sending people that have lots of problems and they're bringing those problems. They're bringing drugs, they're bringing crime. They're rapists..."

Whatchu talking about, Big Indian Gyasi? You selling out the brown folk for a funny-speaking, over-privileged white dude?

Well, not really. I mean,

See, the things that I am thankful for about Donald Trump are not really about Donald Trump himself -- they're about what he reminds us of. His tag line is that he wants to "make America great again" -- and if a person of color is not cognizant of history and simply sees a brown man as President, that might sound just great. "Well shit, let's get great again!"

But the truth is, Donald Trump is doing people of color and women a service when he reminds us that there are two different visions of America: one for people like Trump, who America was created for, and people like us, who literally had to be amended into even being in the Constitution. Bluntly, America has never been great for Native people, for people of color or for women. America has never lived up to its exceptionalism that it promises, that somehow it's the promised land where all men are created equal. Sure, every other nation persecuted, murdered and raped the powerless at some point in its history, but those other nations never had the audacity to hold itself up as a model of tolerance, providence and exceptionalism.

Donald Trump reminds us of that cognitive dissonance between the idea of America and the reality of America. And for that I am thankful.

So here, in short order, are 3 reasons that I am very thankful for Donald Trump:

1)Donald Trump Reminds Us that There is Nothing "Post-Racial" about this Society. Donald Trump is a newer version of David Duke (i.e., a washed up white racist who is a footnote in history) without a critical mass of people supporting his views. Donald Trump's statements -- as obviously racist, Islamaphobic, xenophobic and sexist as they are -- do not happen in a vacuum. There are instead, depending upon which poll you believe, 36 percent of people support those viewpoints. Donald Trump is nothing without that support. That is an important reminder: it's not Trump. It's all the racists that support him.

2)Donald Trump is the Donald Sterling of White Politics. In this society, without written/recorded proof, white people simply don't believe people of color in matters of race and racism. That has been shown over and over and over again, and again was shown when Donald Sterling, former owner of the Los Angeles Clippers, was caught saying some racist stuff on tape. Thing is, people of color had outed his racism thirty years before that! However, it was only when he was caught on tape that white people began to get the notion that perhaps he was, indeed, racist as the folks of color asserted. Similarly, Donald Trump gives life to some overtly racist positions that white folks would likely deny existed in the mainstream but for that Donald Trump actually has the temerity to say them.

3)Donald Trump Is the Racist Uncle that White America Would Love To Pretend Does Not Exist. As stated above, Donald Trump has tremendous public support for his racist positions. He effectively serves as the foil to every single assertion -- whether in Fisher v. University of Texas currently before the US Supreme Court or elsewhere -- that we are past demonizing people of color. That's what he does. From immigration to national security to casinos to civil rights, Donald Trump needs a bad guy to kick and those bad guys tend to be people of color.

It's ugly. But it's truth. And I'm thankful that Donald Trump is there to shine a light on that ugly truth and expose white people's post-racial/race-neutral fantasies for what they are: fantasies. He does it inadvertendly, sure, and not in a way that supposed to shed light. Nonetheless, it's an important reminder that people of color and women are only one president away from returning to the former subservient position we were once in.