A friend once told me that she and her siblings had spent the previous day at Disneyland.

"We spent hours there," she said, "eating chocolate."

I was sooo jealous.

"White chocolate," she said. Suddenly I wasn't jealous anymore. The very thought of white chocolate drained from my soul all envy, interest and desire. White chocolate is to me the un-chocolate, the anti-chocolate, the phantom zombie impostor chocolate that goes around looking and feeling and teasing you into believing that it will taste like chocolate, but lacking color, complexity and mystery -- even the silly childish mystery of milk chocolate. 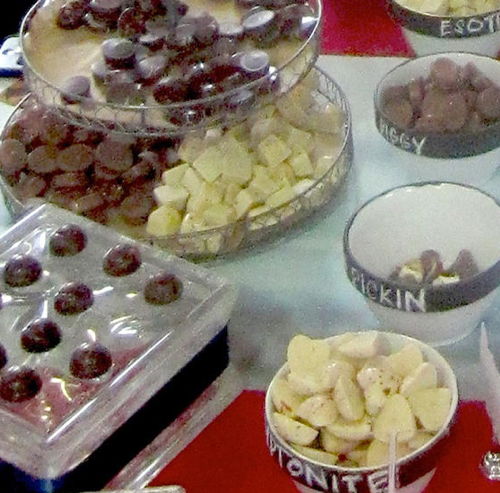 White chocolate offends me in the same way that magicians and armed robbers offend me, the same way I would be offended if a baldheaded stranger wearing my father's wristwatch and not-quite-right Bermuda shorts insisted that he was my dad. Eating white chocolate makes me feel wasteful, as if I was eating suntan cream.

But hey. Some folks love white chocolate. My friend and her siblings could have bought anything at all to eat at Disneyland but chose white chocolate. No one held guns to their heads. White chocolate comprises mainly milk, sugar and cocoa butter. To make it, all the dark, bitter, antioxidant-rich cocoa solids are removed from the cacao beans. Some folks nonetheless prefer this, and for their sakes chocolate companies are going artisanal with the white stuff.

"White chocolate by itself is the most polarizing of all forms of chocolate," says Brad van Dam, CEO of family-owned Hollister, CA-based Marich Confectionery. "For that reason, we have very few pure white chocolate products. The true benefit of white chocolate is that it provides the neutral foundation, a blank canvas" -- which can be "used as a layer to carry color and flavor."

At Marich, white chocolate is "a base from which to elevate the creativity in our products," van Dam told me. "Without white chocolate, our selection would tend to be what I call 'round and brown.'" Instead, white chocolate is an essential part of such products as the exotic Coconut Curry Cashews developed by Marich COO Troy van Dam -- Brad's brother, who loves cooking Thai food. 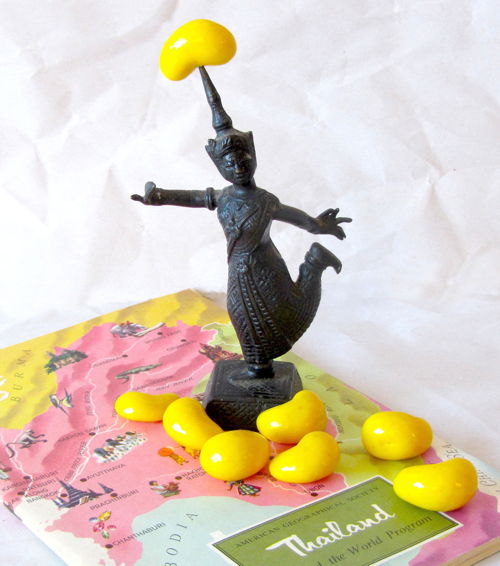 "Beginning with the classic base of coconut and curry, he blended the flavors into our white chocolate and ... chose cashews as the nut to pair with." Natural vegetable extracts provide the sunny color.

"By law, chocolate can only contain sugar, cocoa solids, cocoa butter as its sole fat source, soy lecithin and flavoring -- vanilla or vanillin -- and, in the case of milk chocolate, milk," van Dam said. "Since white chocolate adheres to this standard with only the absence of the cocoa solids, it is a form of chocolate. Is it chocolate? That debate could go on forever."

Vivid memories of a 120-degree day 30 years ago inspired the Veracruz Orange in White Chocolate bar that is among a new line of "couture chocolate" bars offered by jcoco, which is part of Seattle Chocolates and which donates part of its proceeds to food banks. 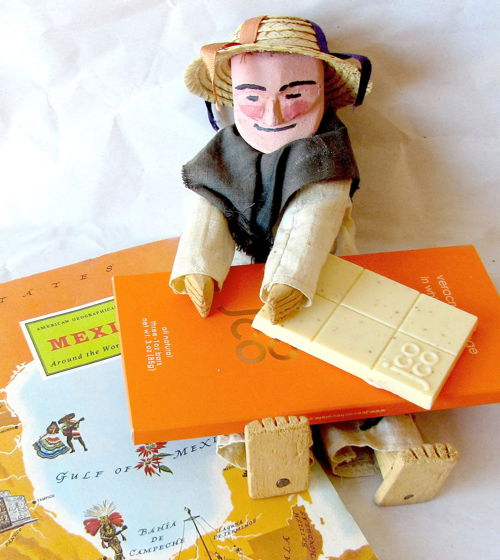 As a young missionary in southern Mexico, Seattle Chocolates President Niel Campbell lived among villagers who were "almost undisturbed in their own culture" -- the white-clad men wearing hats and homemade sandals, the women and girls wearing blue-green shawls over "perfect white dresses with flower-embroidered yokes."

"These beautiful people could not speak Spanish," Campbell told me. "They were in their own quiet existence. It bothered me that I could not know more about them. They were off by themselves and shunned by the Spanish-speaking community as being lesser and uneducated."

"Allowed to retire the rote process of missionary work," Campbell moved "to follow my own goodwill among the Mayans. I wrote my own dictionary by sitting on firewood in their huts and eating with them and speaking with them. I learned the language structure and adopted their ways where I could. I wore sandals like theirs... I translated, taught and did all I could to help them while they helped me to understand their unwritten and wonderful language and all that comes with it." The relationships he built with villagers was "enough to keep them questioning whether or not I was the great white god, Kukulkan, or just some schmo from the state of Washington."

While walking one day in the Yucatan Peninsula, "soaked with sweat in the 120-degree sun," Campbell met a local man.

"I stopped and said, Bix a bel nohoch mak? to which a toothless smile was returned. He asked if I would buy an orange from him for my refreshment. Indeed I would. A machete was drawn and an orange split perfectly at the equator. Then he said, 'This is how we eat our oranges -- and brought forth a chili powder that was sprinkled generously on the surface of each hemisphere.

"As I was so parched, anything would have helped to quench my thirst. But ... the flavor lasted on my tongue for 30 years."

It infuses the Veracruz Orange bar, which goes into a recipe (see below) that Campbell shared with me.

At a recent launch party for San Francisco's new ENO chocolate-cheese-and-wine bar -- a cozy firelit oasis where chocolate flights with names such as "Breakfast of Champions" and "Sometimes You Feel Like a Nut" join a vast array of cheeses and wines -- I met master confectioner and French Pastry School alum Chris Blue, whose handcrafted chocolates are among those served at ENO. Tasked with devising some new creations that would pair well with wine, Blue merged white chocolate with hazelnuts and macadamia nuts. He also created what he calls the Fruit Loop: white chocolate, lemongrass and Meyer lemon zest. 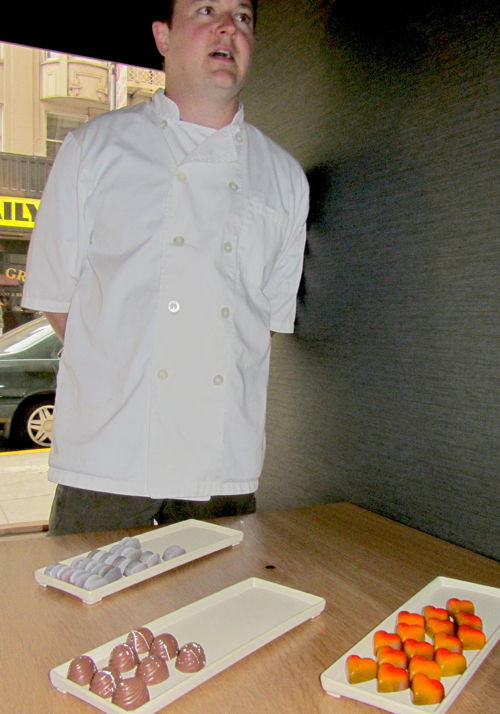 He told me that he found himself especially inclined toward white chocolate because its placid creaminess especially suits wine's strengths and subtleties.

"Champagne and white chocolate are incredible together," Blue enthused.

Proof that white chocolate is here to stay? It has just been added as an award category at TasteTV's International Chocolate Salons, including the San Francisco salon which I attended last month (which is depicted below, and at which Marich Confectionery scored three medals): 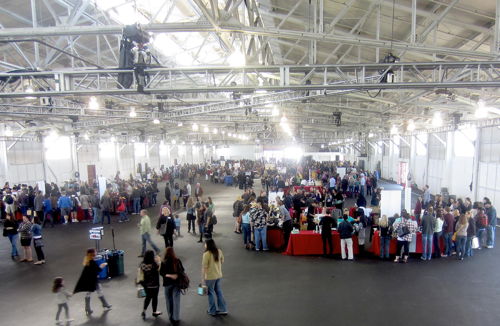 "What I have always liked about white chocolate is its purity of flavor," says TasteTV's A.K. Crump. "In it I find notes of butter, vanilla, cream, and other textures. I also enjoy the fact that it lacks all the stimulants you find in dark chocolate. It is a very versatile product, pairs well with citrus and fruit flavors, and makes an interesting external shell.

"We were asked to add white chocolate as an award category because so many chocolatiers and confectioners have creations in white chocolate of which they are proud, and which sell well," says Crump, who is the author of Chocolate French and who suggests pairing white chocolate with "nothing else sweet" -- but "white chocolate does taste great after a nice cut of meat, or with a fruit drink."

1. Simmer ½ cup Gewurztraminer until reduced by half, and syrupy

4. Serve with baguette or, drizzled over baguette slices, as canapés.