“I see a beautiful city and a brilliant people rising from this abyss, and, in their struggles to be truly free, in their triumphs and defeats, through long years to come, I see the evil of this time and of the previous time of which this is the natural birth."

White Entrepeneurial Guy Detroit -- it doesn't roll off the tongue, but the meme spread between the city's Facebook users like virtual wildfire.

The original concept was simple enough: a photograph snatched from last week's online edition of the newsmagazine Model D, a reference to Thomas Sugrue's must-read urban investigation into the origins of Detroit's population, a pithy quote slapped below. "DUH IT'S NOT A CRISIS IT'S AN OPPORTUNITY."

There are now dozens and dozens of versions, each with a different but damning caption. 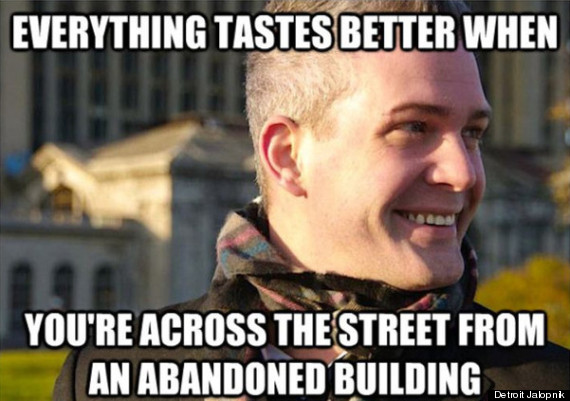 It's rare for Detroiters to see such a close-to-home meme go viral, and perhaps rarer still for such a niche, insidery trope -- that of the new resident assured of his or her own ability to "save" the city -- to gain so much traction.

The image was of Jason Lorimer, a local entrepreneur who founded Dandelion (and occasionally blogs for The Huffington Post). He describes his firm as a collective of "systems designers and project directors who co-create and implement measurable solutions on behalf of civic and social investors" -- of which Detroit (the Midwest Ground Zero for charitable initiatives) has plenty.

Lorimer's editorial in Model D noted that Detroit held an allure worth even more than cash: "cities advertise tax incentives, but Detroit is an opportunity to iterate alongside a community of doers and define the model for the post-industrial American city."

The meme-ists' response exposed a sentiment held by many here: do Detroit's self-professed saviors really come here to make change, or to stake their own reputations? Scroll down below to see the many iterations of the "White Guy Entrepreneurial Meme" going viral in Detroit.

Within 18 hours, the meme had swept over Facebook and Reddit and Twitter, inspiring reproductions and an impassioned blog post on Detroit Jalopnik by local auto journalist Aaron Foley, who remarked that, "satire is indeed rooted in truth."

HuffPost Detroit emailed with the creator of the "White Guy Entrepreneurial Meme," who elected to remain anonymous. The individual wrote us this statement:

While the meme itself is meant to be humorous, it zeroes in on a very critical matter facing Detroit -- that is, the influx of profiteers, venture capitalists, and the like who are looking to make a boatload of money in Detroit while hundreds of thousands continue to suffer the urban crisis -- unemployment, poverty, lack of access to healthcare and education, racism, and so on -- and using nice, progressive sounding language that allows them to feel good about themselves while they do it.

We also reached Jason Lorimer by email, who was out of the country but sent us this response:

I do, in fact, happen to be a white and an entrepreneurial guy and those who know me and the team at Dandelion know we are serious about our work and well intentioned. The impact we are having is indicative of the opportunity that exists for anyone who wants to play a productive role.

Lorimer is, of course, just one White Entrepreneurial Guy in Detroit, and definitely not the most famous, or even the most entrepreneurial. Slows Bar BQ owner Phil Cooley or Quicken billionaire Dan Gilbert (both whose names appear in iterations of the meme) are all "white guys" who have had far more press and more impact (and therefore, have maybe earned more derision).

But it's not just Lorimer. It's the tale of two Detroits. Though others often separate them by color, by money, age or time in the city, another unspoken rift exists. Who can and should hold more influence -- homegrown residents, or newcoming idealists?

Those who resent Lorimer and his ilk often point out that, in the face of Detroit's monumental problems, many newcomers adopt an attitude that their ventures somehow "save a city" where thousands of kids can't read, murder statistics chill the bone and buses never show up. To be fair, Lorimer essentially operates a philanthropic and civic consultancy firm, not a coffeeshop.

Wrote Foley, "I fail to see what that does in the long run to correct, I don't know, the fact that Detroit schoolkids aren't performing to the standards they should or sky-high car insurance rates. There's an entire culture shift that needs to happen here and that can't happen with craft beer."

But Lorimer may have anticipated the backcurrent of outrage, if not the viral form it would take.

"Not everyone has access and people in need, all people in general, should be supported to a point of access," he wrote in the Model D opinion piece. "That fact doesn’t negate the reality of those that have the capacity to create change and make impact have the right to do so, and they should do so here."

On Facebook, many reactions sought to go deeper than the meme itself.

Detroiter Tunde Wey, who works for Model D's parent company, Issue Media Group, noted on Facebook "the conflation that because people advocate sexy solutions (i.e coffee shops) they are somehow arguing against school reform. this is the insinuation of the article ... and a false choice that serves no one."

Social media strategist and entrepreneur Hubert Sawyers wrote on Facebook that the meme is more than just a hard-hitting joke. "The kumbaya moments are evaporating. The gauntlet has been dropped."

"I'm afraid the dreams some of us have in seeing the haves and have-nots working together to rebuild Detroit may never happen. Memes like this make it very apparent."

Seriousness aside, there are some funny jokes about socially-conscious, change-making, fancy coffee-drinking Detroiters in this slideshow. Either take these personally, or enjoy!