Obama is a big enough fan of his White House beer (and beer in general) that he's now carrying it on the campaign bus and occasionally handing out bottles of it. While it may in fact be a great brew, we don't really know for sure since most of us have never tried it. That's why a Reddit user decided to submit a Freedom Of Information Act request for the White House Honey Ale recipe, or any other White House brews, which include White House Honey Porter and White House Honey Blonde Ale. All three use honey from Michelle Obama's White House garden.

The Fedblog points out that this is not the first formal request for the recipe. A petition was recently filed at the White House website, but it needs 25,000 signatures by September 17 before it gets reviewed. As of this writing, it has 295. Only 24,705 to go! The petition pleads, "In keeping with the brewing traditions of the founding fathers, homebrewers across America call on the Obama administration to release the recipe for the White House home brew so that it may be enjoyed by all."

There might be hope with this FOIA request, though. The intrepid FOIA filer explains:

I'm a minor government functionary. You'd be amazed at the things we'll do for you if you make a bizarre request in a reasonable and slightly humorous way. If I'm amused, I'll go above and beyond, and you can't get it if you don't ask.

More likely, however, is that there is not a responsive document, and the brewmaster is doing it out of his head or personal notes or some other nonrequestable method. In any event, I'm at the mercy of the whim and sense of humor of someone that's got no reason to deal with me. [...]

A personal notebook or an email about ingredients probably doesn't fall under the definition of "documents" in FOIA, but a brewing manual or recipie book or something like that which is used to train others WOULD be a responsive document. If I'm lucky, that's what I'll get.

One thing about FOIA though is that they are under no obligation to create a document that doesn't exist already- i.e. no walking down to the kitchen to have the chef write it down. That's not to say that the request, in the hands of the right person, might not make that happen, but just the FOIA doesn't obligate them to do anything like it.

Another user points out:

President Obama issued an order to the executive branch in his first year in office regarding the FOIA. He specifically instructed agencies to err on the side of disclosure is ever there was a question as to the validity of a request or the extent to which a request should be honored. I imagine his personal staff would follow his instructions. 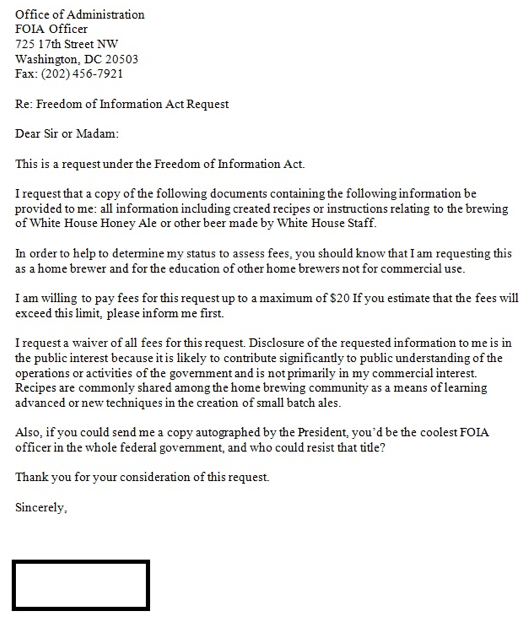