Easter is a perfect holiday. It brings together many of my favorite things: candy, exercise (of the lighter variety), flowers, cute animals and politics. Yes, politics! The White House Easter egg roll is one of the most colorful, funny and young events at 1600 Pennsylvania Avenue. And this year the Obamas are also applying a little "change" to the event by putting the tickets online for the first time. As expected, these tickets sold out in less time than it takes to lay an egg, chase it down the lawn, hide it, find it, peck at it... enough with the eggaphors (metaphors, for those who didn't get the pun).

Since only a lucky few will be at the event on Monday, April 13, I've put together a list of little know facts about the event. And to add some visual flavor, there's a slide show chronicling the Easter party through history at the bottom of this list.

1. The White House Easter egg roll was originally in front of Capitol Hill. That site was closed off after President Ulysses S. Grant signed a bill in 1876 banning egg-rolling because it caused too much wear and tear to the lawns. The law was so strictly enforced that the Capitol Police had to eject some die-hard rollers.

2. President Rutherford B. Hayes' wife, Lucy, was the first person to bring the egg roll to the White House. In 1878, she let in a group of rollers who were waiting at the gates, hoping to take advantage of the White House's sloping lawn. She made sure liquor and wine were banned, but not the eggs!

3. Dolly Madison is said to have started the egg roll in front of the Capitol in 1814.
She's also considered the first to have served ice cream at the White House. That, along with her love for egg rolling, makes her quite the farm products queen.

4. Grover Cleveland was the first President to join the egg roll. In 1885 a group of kids demanded a personal audience with the president after walking into the East Room of the White House (security clearly wasn't as tight then). After that, the rollers were allowed indoors.

5. Music was added to the party in 1889. The United States Marine Band, conducted by John Philip Sousa, was asked to play for the children. Sousa's "Easter Monday on the White House Lawn" was composed in honor of the tradition. The Jonas Brothers, a favorite band of First Daughters Malia and Sasha Obama, played for the rollers in 2008.

6. The White House instituted a one adult per child rule in the 1930s. The crowd got so sneaky about circumventing the rule that the Secret Service had to regulate at the gates. Crafty children would even charge adults to come in with them.

7. Folk Dancing was introduced as a replacement to the egg roll in 1929. President Hoover's wife, Lou, was so grossed out by the egg stench that she tried to encourage diversions that didn't involve cracking eggs.

8. The egg roll was canceled during the two World Wars. Renovations during the Truman administration also stopped the event from 1948 through 1952.

9. The first and only Easter egg hunt was introduced during the Nixon administration. Unlike other things discovered in the Nixon White House, some bad eggs remained hidden and a stench ensued. The Nixons were also the the first family to introduce egg roll races, using spoons from the White House kitchen.

10. A member of First Lady Pat Nixon's staff dressed up as the first human-sized bunny. Since then, life-sized bunnies and other animals have strolled the White House lawns during the event.

11. The Obama administration allocated tickets for gay and lesbian families for the first time this year. In 2006, Conservative groups accused gay and lesbian parents attending the event of "crashing."

12. The Obamas chose a green egg as their souvenir. Recent administrations have chosen to give out keepsakes of the event. In the spirit of a greener White House, kids will get an egg designed to be "the greenest egg in White House Easter Egg Roll History" this year. 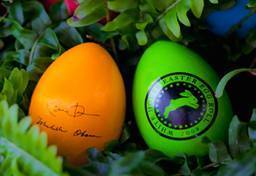 Check out a slideshow of the White House Easter egg roll through the ages: