There's no mistaking that the holidays are around the corner. It's getting colder, the shops are playing "It's Beginning to Look a Lot Like Christmas" on their overhead speakers and now, the final nail in the coffin: the White House just put up its yearly gingerbread house.

Mrs. Obama declared the work "phenomenal" when she welcomed military families on Wednesday to the gingerbread house's first viewing. The families were also invited to enjoy the rest of the White House's holiday decorations. The house will be on display in the State Dining Room throughout the holiday season; nearly 90,000 White House guests will likely view it in December.

The gingerbread walls were rendered to a gray-white to look like the special Virginia sandstone used to build the real White House, which was the same color before it was painted white in 1798.

Obama Foodorama offers some in-depth details about the house, which is with various flours made with rye, buckwheat and whole wheat. The structure is held together with a "spackle and mortar" made with white chocolate, and silicon molds were used to achieve realistic architectural details.

Our one gripe: look how huge Bo is in proportion to the rest of the house! Even Michelle remarked on it. "He is almost as big as the house," she said. "That basically represents Bo’s standing ... he is such a huge personality."

Get a closer look at this year's White House gingerbread house in the gallery below. 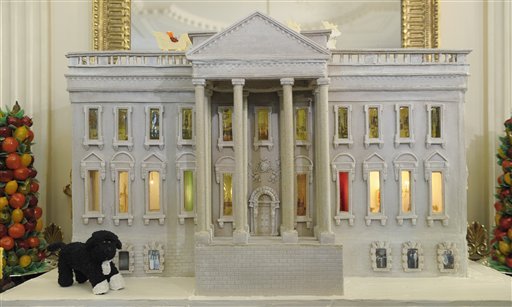 1 / 7
The White House's official gingerbread house is now on display in the State Dining Room of the White House.
AP