It's not every day that the White House responds to one of your tweets--but it's even rarer that it "rickrolls" you.

Twitter user David Wiggs (@wiggsd) decided to share his thoughts on the latest White House correspondence briefing, which he described as "[not] nearly as entertaining as yesterday's," in a tweet that incorporated the #WHChat and #TCOT hashtags.

Moments later, he received a response from the official @WhiteHouse Twitter account. Not only did the White House tweet back, it also pulled a prank on Wiggs and the account's over 2.3 million followers.

"Sorry to hear that. Fiscal policy is important, but can be dry sometimes. Here's something more fun," wrote @WhiteHouse, with a link to a music video of Rick Astley's "Never Gonna Give You Up."

In other words, Wiggs--and anyone else who clicked the link--got rickrolled, a term for an Internet meme that essentially consists of directing someone unknowingly to Rick Astley's 80s hit song. Short links (like "huff.to") on Twitter are great for this type of tomfoolery because they mask they actual URL of a page. (The White House used "tinyurl.com/y8ufsnp.")

You can scroll down to see the tweets for yourself.

While this rickroll may be the first from Pennsylvania Avenue, it's not the first time its been used by a political force. Apparently, when Nancy Pelosi rolled out Congress' official YouTube channel (www.YouTube.com/HouseHub) in early 2009, visitors were treated to the same surprise.

This WH correspondence briefing isn't nearly as entertaining as yesterday's. #TCOT #WHchatless than a minute ago via web Favorite Retweet ReplyDavid Wiggs

@wiggsd Sorry to hear that. Fiscal policy is important, but can be dry sometimes. Here's something more fun: http://t.co/ca31My7 #WHChatless than a minute ago via web Favorite Retweet ReplyThe White House

A screenshot (In case you REALLY don't want to get rickrolled): 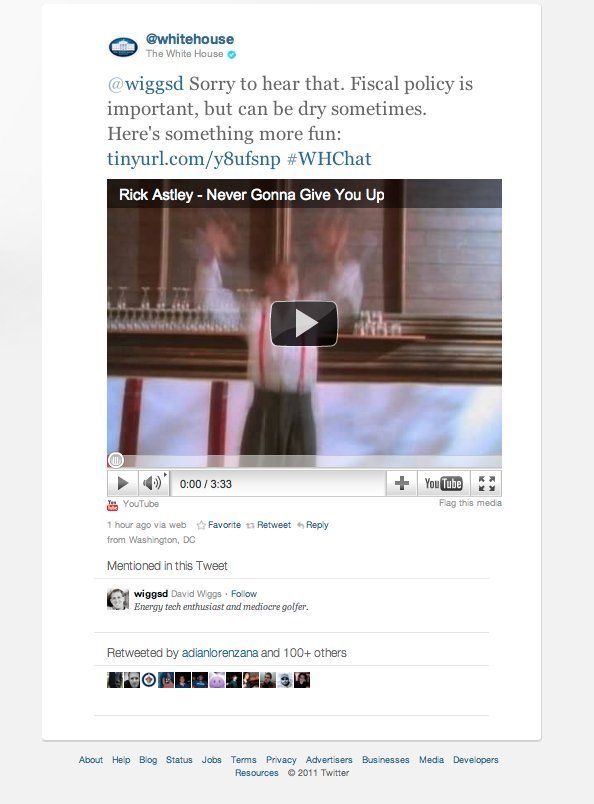