President Obama's first days in office have been chock full of reversing the actions of the previous president, from halting midnight environmental regulations to taking steps toward closing the Guantanamo Bay prison site.

It reminds me of another famous undoing, and raises a question: What happened to the solar panels that President Jimmy Carter had put on the White House and President Ronald Reagan had removed? Well, it turns out someone's making a documentary for me all about that. See the description and trailer below.

In 1979, Jimmy Carter, in a forward-looking move, installed solar panels in the roof of the White House. This symbolic installation was taken down in 1986 during the Reagan presidency. In 1991, Unity College, an environmentally centered college in Maine acquired the panels and later installed them on their cafeteria.

In "A Road not Taken", swiss artists Christina Hemauer and Roman Keller travel back in time and, following the route the panels took, interview those involved in the solar panel decisions, in the oil crisis of the time, and in the way that that moment presaged our own era. The documentary essay is still in work and will be about 70 minutes long.

BUT WAIT... THEY'RE ON A CAFETERIA?

We had mistakenly reported that the panels were sold, but a Unity College representative helpfully wrote in to say the panels were still there, just not in service anymore. And they attached this photo: 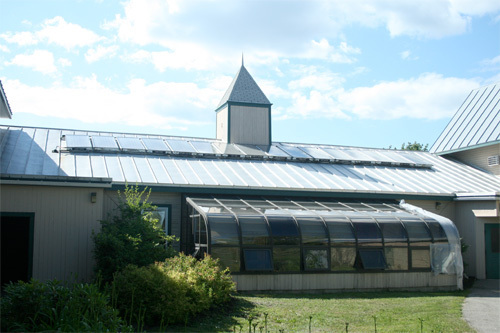 Some new White House solar panels were actually installed in 2003:

In 2003, solar photovoltaic panels were installed at the White House. Two smaller solar thermal systems were also installed to heat water: one for landscape maintenance personnel, the other for the presidential pool and spa.

The Bush Administration itself never really announced the project. Instead the installation was completed "under the radar;" industry trade journals were the media that picked up the story.

The current White House solar panels are not thought to produce much power.

With Washington's climate and the pitch of the building roofs considered less than ideal, the output of any system would be limited, said one of the project's managers.

That was probably the case during the energy crisis of the 1970s, when President Jimmy Carter donned a sweater, turned down his thermostat --and had a solar-powered water system installed. It was later removed by President Ronald Reagan, who shipped the panels off to Unity College in Maine, where they still heat the water for the school's cafeteria.