WASHINGTON -- Friday's shooting in Newtown, Conn., put the spotlight on President Barack Obama politically and, for many people, it was personal, as dozens turned up outside the White House gates begging him to take action on gun control.

Activists, sympathetic parents, and those affected by gun violence in the past gathered to collectively grieve at the impromptu vigil. They chanted, lit candles handed out by advocacy groups, and pleaded for political action in the wake of the latest episode of gun violence to afflict the nation.

The shooting of a reported 26 people, including 20 children, at Sandy Hook Elementary School left people looking for not just answers, but an outlet.

Jennifer Oko was among those who came to 1600 Pennsylvania Ave. to light a candle and call on the president to move gun control legislation. A New Yorker who now lives in D.C., Oko is the mother to a 5-year-old and a 7-year-old who are in kindergarten and first grade, respectively. She said she was torn as to whether to go home and see her kids immediately after work or come to the White House to attend the vigil. "I felt I needed to show solidarity," she said.

But the unstated reason may have been her nerves over how, exactly, to talk to her kids about what had happened in Connecticut.

"Isn't that the question?" she said, when asked what she would tell her children. "The 5-year-old, I don't know how much she can understand it. I think we may just need to tell them that we will do everything we can to make sure they will live safe lives."

Toby Hoover, director of the Ohio Coalition Against Gun Violence, said she lost her husband to gun violence when she was 30 years old. She had an 8-year-old and a 4-year-old at the time. Asked how she explained the death to them, she was quick with an answer: "You don't. And they've grown up and I'm still trying to explain it."

After news broke of the shooting in Newtown, she said that her son texted her, asking how something like this could happen again. She said she couldn't even contemplate what it was like to have a child of her own in that classroom on Friday. Instead, she said she was troubled by the inability of the political process to address these instances.

"What are we talking about here? Have we raised the gun to idol status?"

"The president's tears were nice," she added. "But he was supposed to lead us. He told us that if we elected him, he'd give us hope. I need hope."

She didn't have to go far for answers. Walking among the crowd, outside the gates, was Jon Carson, Obama's director of the Office of Public Engagement. He told The Huffington Post that he had a 4-year-old and had stepped out to take in the scene of the Sandy Hook vigil. Several progressive advocates, including those pushing for the president to tackle gun control legislation, were pleased with his presence there.

At least two people on the scene were overjoyed to see dozens of others turning out in the name of gun control. Barbara Elsas and Linda Finkel-Talvadkar, both of whom identified as "children of the '60s," regularly set up camp outside the White House on Mondays and talk to passersby about the need to urge politicians to revisit gun laws. The two women, along with a handful of others, said they've been doing this ever since the July shooting spree in Aurora, Colo.

"We are constantly here," said Elsas, who runs a preschool in Washington, D.C. "We talk to people and we educate people. We try to change minds one person at a time."

The two women were easy to spot in the crowd: Both were wearing large, colorful signs with messages like, “It Is Too Easy To Buy A Gun In The U.S.A -- We need to change this!!” Elsas said they got involved in gun control advocacy because they kept hearing about people getting killed in shootings and said there wasn't much of a sustained public response.

The only time people talk about gun control is when things "happen like this," said Elsas, motioning to the mourning crowd around her. "Then everybody comes out and holds a candle and sings, 'We Shall Overcome.' That's wonderful, beautiful. I'm here to do that, too. But what about tomorrow?"

"What are they going to do the next day? And the next day?" chimed in Finkel-Talvadkar, a former high school principal.

Despite all the calls for action on gun control, next to no one at the vigil had specific requests for Obama or congressional leaders. Rev. Michael McBride of PICO National Network, who led prayers over a megaphone and demanded Obama to act, said only that the president needs to show “leadership," and avoided questions about what, exactly, should be done. Similarly, Andy Pelosi of Gun Free Kids, who also spoke at the event, avoided specifics when asked what he would like to see happen.

“Today’s the day to start that dialogue,” Pelosi said. “There’s so many different things. We’ve had so many years in this country where nothing’s been done on the gun issue. Absolutely nothing. So this is the opportunity now. The second term is starting.”

Elsas could name something specific, though.

"The assault weapons ban needs to come back in five seconds," she said. "That's number one."

See pictures below from the White House vigil, snapped by HuffPost's Brandon Wetherbee. 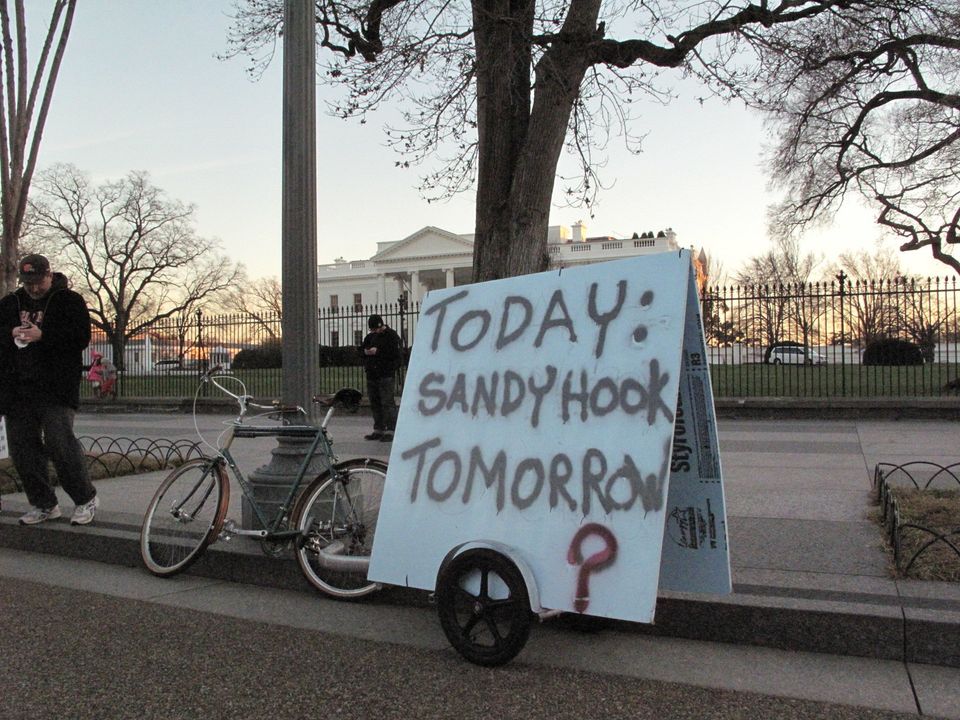