The Berlin Wall fell, Nelson Mandela has been released, became president and has died, the Gulf War started, the World Wide Web has been invented, the Bosnian War separated Yugoslavia, the European Union is formed, apartheid ended, the first successful cloning has happened, Mother Theresa died, the Kyoto Protocol has been adopted, Google is founded, 9/11 happened, the U.S. invaded Afghanistan and Iraq, Facebook has been founded, the Arab Spring shook the world, Obama became the first black president and Michael Jackson died -- but one thing that remained constant while all this happened was the peaceful protest against nuclear weapons led by vigils like Connie Picciotto. In front of the White House. 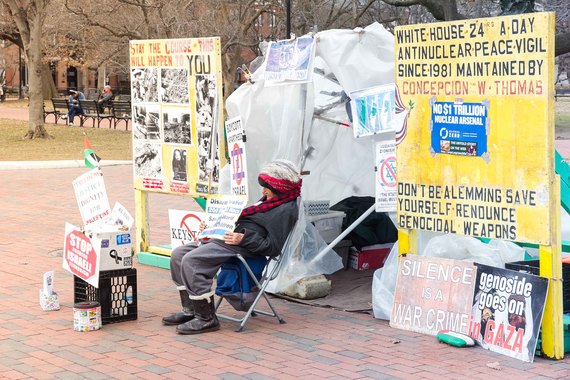 Connie Picciotto, also known as Conchita, or fully, Concepcion, is a face not to miss when visiting the White House. That's what happened to us too, when we visited the White House. It was a misty day, it was raining, but we didn't care, because we were in Washington! Reaching the White House we took some pictures of this mighty building. "Do you want me to take a picture?", asks a man while pointing to the camera. While posing, I look beyond the camera, and boom, there she was. A little woman, in her small white tent, almost disappearing into her own body the way she was sitting down on that small chair. Almost 20 signs surround her little tent: "Disarm IsraHell", "Don't be a lemming, save yourself, renounce genocidal weapons", "Silence is a war crime", "No £1 TRILLION Nuclear Arsenal" -- and she was firmly holding one sign. 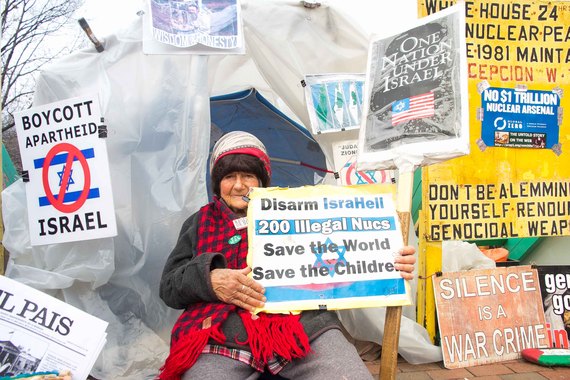 I walked over to her. You could see she was old. Tired, in many ways. The way the corners of her mouth almost seemed unable to go up to create a smile, the way you could feel she has almost lost hope. She was tiny, her face wrinkled, and she was wearing a very interesting wig. The hair seemed obviously fake, but under it, it seems like she is wearing a helmet of some sort. A cotton cloth saying "Nieuw Amsterdam" covered the hair and helmet. Her whole appearance was very intriguing.

Connie has been there since 1981. The world continued, while she stayed there. She told me about how she got where she is. Born in Spain, she became an orphan very young. She moved to New York in 1969 when she was 18 and worked for the Pavilion of Spain for a while. She moved on to work for the United Nations and ended up working for the Embassy of Spain for nine years. In New York, she met her former husband, an Italian businessman. They adopted a child from Argentina, Olga. The marriage ended in a divorce and she lost custody of the child -- but gets uncomfortable talking about this subject. "My husband did terrible things to me, but the worst is taking my baby away." In an effort to find Olga, Connie went to Washington. That's where she met William Thomas. Thomas' life was dedicated to activism, in its hardest form. Thomas didn't care about personal possession, destroyed his passport refusing to go back to the U.S., swam across seas to get to Israel (only to get imprisoned), has been in jail multiple times and in many different countries -- sometimes even refusing to be let go just out of solidarity for the other imprisoners. A whole book can be written about Thomas' altruistic activism. Thomas' dedication to peace inspired Connie. So she joined his protest. Together, they have manned this tent in front of the White House for over 30 years. Together, they have led this fight against nuclear weapons.

Thomas died in 2009. But Connie has kept the battle on. The struggle did get more difficult, because now she's alone, she is more than ever dependent on part-time volunteers. According to the law, you're not allowed to leave promotional material alone, so volunteers guard the tent if she needs to go to the toilet, take a shower or check the Internet on world affairs, in the apartment/office Thomas left her. That's where she goes very late at night too, because camping is also not allowed. She returns early morning.

She didn't seem convinced about the reasons media has given to Thomas' death. "Pulmonary disease," they say, but according to Connie the police have a direct cause because they aggravated his asthma.

"I don't watch media. I don't listen to it anymore. Actually, the problem is that people don't think critically anymore. They just take over anything the media says." She seems bitter. Angered. But she is absolutely right, is all I kept thinking. Media is not automatically trustworthy. If you ask me, objectivity does not exist.

A group of school kids come and stand in front of Connie's tent. She turns her face to these kids. "Kids, don't listen to the media, think critically, do research and make up your own mind. We have to stop nuclear war, it can destroy us all," she says. I turn and look at the kids. A few kids in the front look seriously, listen and ask questions, but the majority just look at each other and laugh. The message didn't come across. It makes me sad. But I can't really blame the kids. For a few minutes, I imagine myself aged 12. You're on your first high school day out, walking around and then get sucked into a conversation about how you shouldn't watch TV or listen to the radio. This old, wrinkly, seemingly confused lady tells you media is a load of bullsh-t, but all you want to do is watch funny videos, listen to FunkFM and be cool, hanging with your friends.

But listening to her stories, you kind of get her cynicism. "When I worked at the UN, the higher up I got, the more problems I ran into. You get pushed away, having too much of an opinion. Even while I'm here, I don't really do anything; all I do is sit here and talk to people. But I get beaten up, dragged away, put in jail, or verbally abused. By the police, not just bystanders. Police are criminals in uniform. Do you want to see what the police did to me?" She attempts to get up, before I can even answer. Getting up isn't that easy for her anymore. I tell her I can help if she wants to, but she waves me away and uses all her power to get off her chair. She goes inside the tent and gets another big carton board, with pictures of her injured body and pictures of medical evidence. "They hit me repeatedly, poisoned me and try to get me to shut up."

Her bitterness is in every sentence she speaks. "This nuclear war is not far away from happening. It is going to ruin humanity. There is now almost 1 trillion dollars in it, it will be a human genocide if we don't stop it." 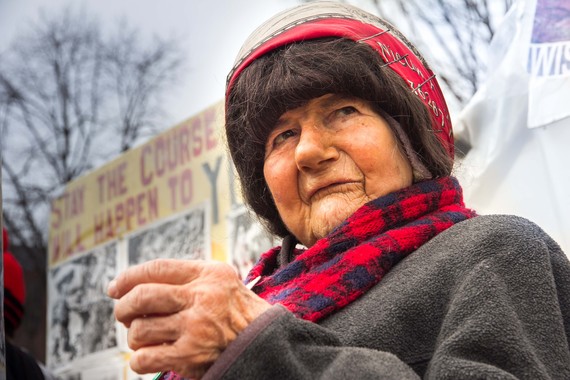 During this whole conversation, I have seen the sadness in her eyes. There is something interesting about her face, about her eyes. I always believe eyes can tell a story. Connie's eyes tell her story. You can see the anger, sadness, and pain. It hurts me. She tells me she's sad, scared for humanity. She is losing faith. I can see her eyes getting sadder. I catch her eyes and tell her: "I don't believe humanity is lost. I have with me a community of 100,000 young people around the world at World Merit, who are actively fighting for change. Who are activists. All in their own ways, but they all want to rid the world of pain, injustice and suffering. I can tell you for a fact, they are changing the world and people of merit do exist." She looks confused, but for the first time, I see a smile appearing on her face, I see hope in her eyes. It seems she doesn't really know what to say, so she continues talking to me about how we need to fight to stop this nuclear war from happening. I tell her that we will always continue doing this, and then I ask her: "Do you have hope?" "Yes," she tells me, "I could have chosen a whole other life journey, but hope is what has kept me here until today."

For 34 years, 24 hours a day, seven days a week. I can't imagine the amount of dedication you must have to do that. It is considered the longest established peace vigil in the world. 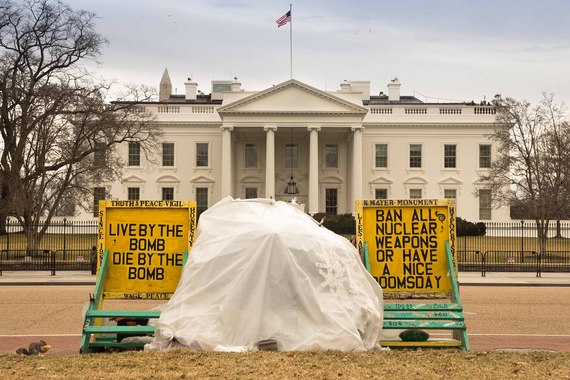 All photographs copyrighted by Zita