As the weather cools and bats across North America prepare to hibernate, a new study sheds light on the mysterious monster that will haunt them in their sleep. Much like Freddy Krueger, Michael Myers and other Halloween villains, the fungus that causes white-nose syndrome in bats is ridiculously difficult to kill, researchers report.

That fungus, Pseudogymnoascus destructans, has killed around 6 million American bats since its debut in a single New York cave seven years ago. It now infects 22 U.S. states and five Canadian provinces, decimating entire bat colonies with a mortality rate of nearly 100 percent. And according to a new study published in the journal PLOS One, P. destructans is a flexible fiend whose survival doesn't hinge on the bats it massacres.

"It can basically live on any complex carbon source, which encompasses insects, undigested insect parts in guano, wood, dead fungi and cave fish," says lead author and University of Illinois grad student Daniel Raudabaugh in a press release. "We looked at all the different nitrogen sources and found that basically it can grow on all of them."

This adaptable diet is made possible by enzymes that break down urea and other proteins, producing highly alkaline conditions that can burn holes in skin and leave bats vulnerable to further infection. "P. destructans appears to create an environment that should degrade the structure of keratin, the main protein in skin," Raudabaugh says. It can also survive on other proteins and lipids in bats' skin and bodily fluids, the study shows.

While previous studies have examined the fungus's genome and its effects on bats, this is the first in-depth look at its basic biology, according to Andrew Miller, a mycologist for the Illinois Natural History Survey who helped direct Raudabaugh's research. "Dan found that P. destructans can live perfectly happily off the remains of most organisms that co-inhabit the caves with the bats," Miller says. "This means that whether the bats are there or not, it's going to be in the caves for a very long time." 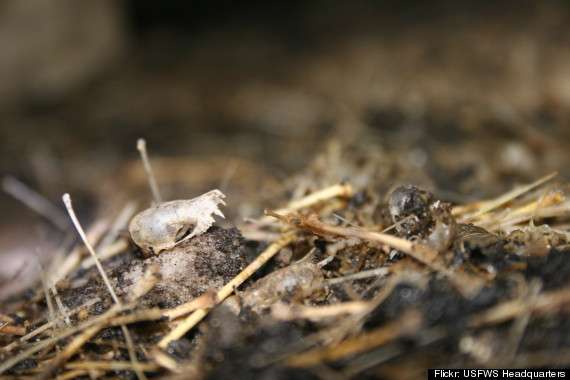 A bat skull lies on the floor of Mt. Aeolus Cave in Vermont. (Photo: Ann Froschauer/USFWS)

Heat is one of the few silver bullets for the cold-loving fungus, which only manages to infect warm-blooded bats because hibernation decreases their body temperatures. But since artificially heating thousands of bat caves across the continent isn't a practical solution, scientists are searching for other ways to control the disease's rapid spread.

The fungus does struggle in extremely acidic conditions, Raudabaugh notes, but otherwise tolerates a "very wide range of pH" as well as high calcium levels, inhibitory sulfur compounds and other naturally occurring hurdles. Its only significant weakness, aside from temperatures above 68 degrees Fahrenheit, seems to be the way it drinks water, he says.

P. destructans' cells are leaky, making it hard for them to absorb water from dry wood and other surfaces that cling to moisture. But the fungus has apparently solved that problem, since it can draw up water more easily in the presence of degraded fats or free fatty acids — both of which occur on the skin of living and dead animals, including bats.

A map showing the spread of white-nose syndrome since 2006. (Image: whitenosesyndrome.org)

The fungus is thought to be an invader from Europe, where native bats are relatively immune to similar species of cave-dwelling fungi. Scientists say it probably hitched a ride across the Atlantic on the shoes, clothing or equipment of unwitting spelunkers, who may have inadvertently helped it invade a continent full of defenseless bats.

It remains unclear exactly how P. destructans kills bats, but it seems to wake them up too early from hibernation, leaving them to search fruitlessly for insects in the dead of winter. Aside from damaged skin and the characteristic white fuzz on their noses, ears and wings, many infected bats are found with empty stomachs, suggesting they starved to death.

"All in all, the news for hibernating bats in the U.S. is pretty grim," Miller says. That won't stop the quest to save American bats, though, which play important economic as well as ecological roles. Insect-eating bats keep a variety of disease-spreading and crop-killing insects in check, saving the U.S. agriculture industry an estimated $3 billion per year.

Researchers with the U.S. Forest Service recently discovered the closest relative of P. destructans that doesn't cause disease, offering hope that science might find a way to defang the fungus. "Identification of the closest known relatives of this fungus makes it possible to move forward with genetic work to examine the molecular toolbox this fungus uses to kill bats," USFS researcher Daniel Lindner said earlier this year. "Ultimately, we hope to use this information to interrupt the ability of this fungus to cause disease."