"First of all," he said, "if you can learn a simple trick, Scout, you'll get along a lot better with all kinds of folks. You never really understand a person until you consider things from his point of view, until you climb into his skin and walk around in it."

-Atticus Finch, To Kill a Mockingbird, by Harper Lee

June 17, 2015 started on a high note: Our first African-American woman Attorney General, Loretta Lynch, sworn in by our first Latina Supreme Court Justice, Sonia Sotomayor, in front of our first African-American President, Barack Obama, on Frederick Douglass' Bible. It ended with a new nadir: a hate crime in Charleston, South Carolina, where nine African-American men and women lost their lives to a racially motivated gunman whom they had welcomed into their beloved community. The terror, hurt and vulnerability this has provoked cannot be overstated, especially in the context of recent events that time and time again remind us that racism is alive and well in our country.

Racism thrives not only in these instances of extreme brutality that capture headlines and provoke our outrage; it's permeated in deep and sometimes subtle ways throughout our society, in ways that are often much harder to see. It's inscribed in our geography and culture and entrenched in our institutions and systems, including those that govern access to capital, education, employment, health care, philanthropy and justice. It exists among liberals as well as conservatives, in universities and corporations, in neighborhoods and houses of worship, in the North, South, East and West.

I ask my fellow white people, how much worse is it going to have to get before we take accountability for our racism and actively engage in dismantling it? As hard as this may be to hear, we, white people, are the originators of racism in America. While we do not have an exclusive monopoly on racism, we sit at the top of the racism food chain, and we are the ones with the power to end it.

Right about now, you might be saying to yourself, "Hey lady, wait a minute, what do you mean 'our racism'? I'm not racist, I've never called anyone a racial epithet, I believe in treating people the same regardless of skin color, I even have a couple of black friends. What have I got to do with any of this?" You might even think the solution is simply to say, "I see no color distinction, I see only humans."

The vast majority of white people -- like people of every other race -- are well-intentioned and do not set out to harm anyone because of their race. But unfortunately, good intentions aren't enough. If we just stop at being nice and do not actively struggle to end it, racism will perpetuate and flourish. It's up to us -- all those white people who say, "Hey, I'm not racist" -- to step up and take a long deep look at the way racism and racial inequality continues to function in America and to ask the honest, humble question, "What can we do?"

Guided by mentors, mentees, friends, colleagues and experts, I have been walking on the journey of reducing my biases my entire career. I have made many mistakes along the way and I am far from done. At the start, like many people, I considered myself a good person, and since good people are not racist, I was, ergo, not racist. By studying this topic extensively, having many conversations, and actively working against racism, I came to understand that in order to move forward, I would need to lose the "good person/bad person" binary and quiet the toxic storm of guilt, shame and fear that swirled in my brain each time I thought about myself in association with racism. I needed to get over myself and focus not on patting myself on the back for being such a good non-racist, but to start asking what more can I do.

To be clear, it's not my intent here to make anyone feel guilty or shameful about being white. I am proud of my heritage and the values that were instilled in me by my family: empathy, compassion, service, humility, community. It is precisely those values that have led me to where I am today. My intent is to help white people recognize that it's our responsibility to end racism. Because racism is a learned behavior, we can actually unlearn it. Ending racism is both doable and imperative. People of color have been working to end racism for a very long time, but they can't shoulder the responsibility alone. Until white people step up and do our share of the work, we are going to be mired in this mess indefinitely.

I am grateful for the many and growing number of white antiracism activists and educators who are leading the way to this conversation in the white community, including Tim Wise, Dr. Robin Diangelo, Ali Michael, Sally Kohn, Laci Green, Janet Helms, Peggy McIntosh and others. CNN journalist Brooke Baldwin is moving in this direction.

White people must understand our role in perpetuating racism and seek to form authentic caring relationships with people of color. We need to have honest open painful conversations about race. We need to request the feedback of people of color on how to improve the way we interact, listen deeply and humbly act on that feedback. And then work side by side with people of color to dismantle racist institutions and create new inclusive ones.

Racism will not end from on high; it will end when a grassroots movement of people like you and me committed to reflect on ourselves and our communities grows in size and influence until the culture shifts.

Which side are you on? Now is the time to decide and act.

White People, If You're Not Part of the Solution, You're Part of the Problem
Protesters Outside North Charleston City Hall For Walter Scott 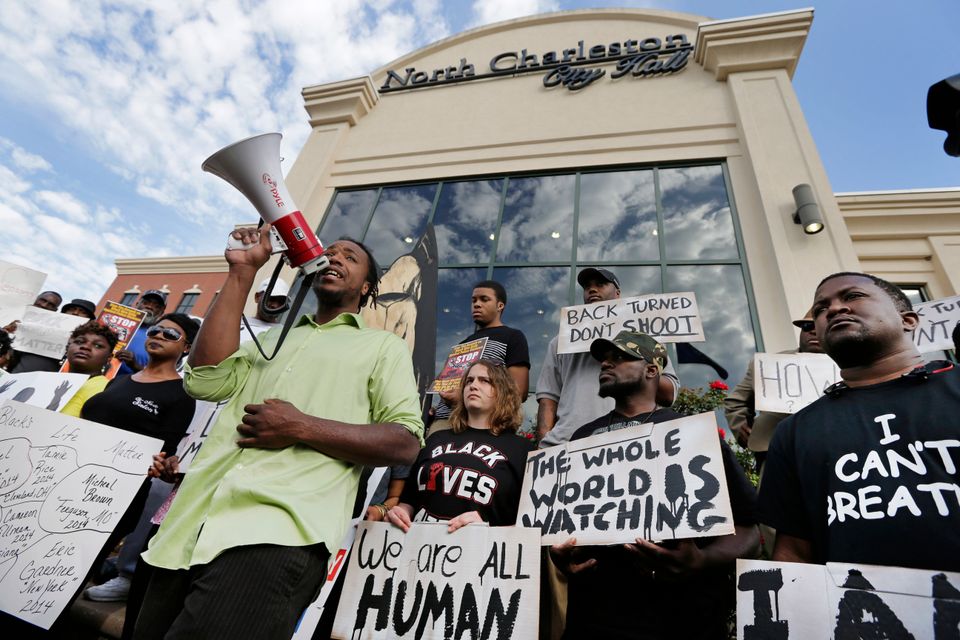