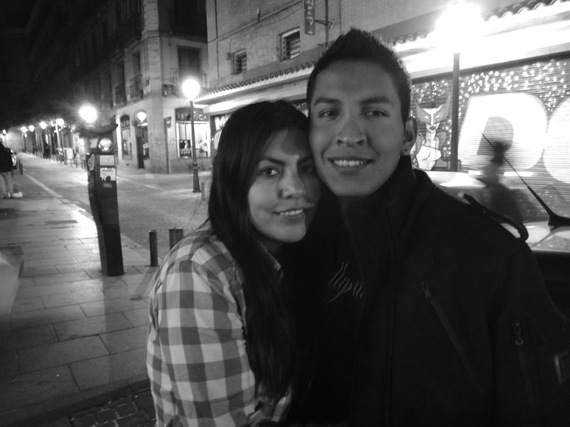 Me and my cousin Victor in Madrid, Spain. Summer Holidays 2013.

Last year ended with a bitter reality; a black 12-year-old gets shot by the police and the white policeman doesn't even face charges.

I live in a world where any of my brothers or cousins, because of the color of their skin and complexion, can be shot by the police. A world that tries to justify the killing of Tamir Rice, a 12-year-old kid, tragically killed by the very people who are supposed to be there to protect us. The shooting of Tamir at the hands of the authorities isn't an isolated case in any one country, but a reflection of what's going on in many white-dominated countries around the world, from Brazil to Australia.

I have a cousin that I love more than anything; he is tall, brown, and beautiful and loves tattoos... I often wonder if the police in Virginia will one day pick him up and he won't return to us. I get stressed when he shows me a new tattoo, as if because he is brown, he doesn't have the right to do what he pleases with his body.

I live in a world that is full of damaging stereotypes, in a world where people instantly assume someone who looks like me is a cleaner or a maid and not a director or filmmaker. I remember walking in Williamsburg and Bondi Beach with a nanny pushing my daughter's stroller next to me. The looks and attitude I get from shop assistants to waitresses is really upsetting, as if because the color of my skin I don't have the right to have a nanny.

As a filmmaker of color, I have to prove myself all the time and often see my colleagues of color doing the same. We're denied our individuality and our right to experiment, fail and stand up again to keep creating. This is a heavy burden to carry as an artist. This right was denied to me the moment I was born, it has nothing to do with my capacity or talent as an artist but with my skin color.

A few days ago, a white woman who's a friend of my mother in law decided to question a post I wrote on my Facebook page in support of Tamir Rice. She was adamant I hear the other side of the story, the trail of posts went from bad to worse. She questioned my professionalism, called me racist against white people and said if one of her Muslim sons was shot by police in the same situation, "I wouldn't be surprised of the outcome. I would hope none of them did that because they had been raised better than that." What astonishes me is that she believed she had the right to force her opinion on my Facebook wall. Her white privilege made her oblivious to the fact that she was invading my space and she kept going... That same privilege authorizes her to use words like 'freedom of expression' and 'objectivity' as an excuse to insult me and insult all people of color. According to her, Tamir Rice was a badly-behaved boy and was scaring people, saying his killing wasn't a surprise, that his behavior somehow justified the police killing him. I'm writing about this incident because it's not an isolated one, this woman represents a white middle class that I find frightening.

Last week I took my daughter to Tompkins Square Park in New York, she watches the dogs and likes to play in a little corner that she calls her shop. A slightly older boy was already there and refused to let her in, pushing her away. I said to him it isn't nice to do that and that they can both share the shop. He wasn't happy and went to talk to his mother, he came back and asked, "Are you a bit black?" I answered, "yes," then he asked me if my daughter was a bit black and I answered yes too. He then told the other kids there not to play with Suri because she was a bit black. I followed the boy to his mother and told her what he'd just said to me. She frowned, said sorry and left the park. 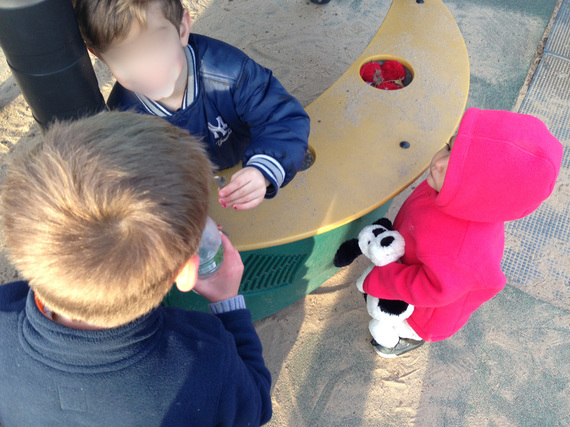 My daughter Suri at her 'shop' in Tompkins Square Park. December 2015.

As I watched them walk away, I felt proud the white woman was leaving the park and not me as I might have done in the past. This time she was the one who was embarrassed and left.

This little incident shows me the power that is growing inside me every day, the power of knowing my limits, the power of standing up every time a racist behavior arises, the power to call out racism in the faces of white people.