Some of the most prominent hosts on Fox News are pretty sure the term "white privilege" refers to a mythical concept, like Bigfoot, Santa Claus or (if you're Fox News) climate change.

Sure, other people say white privilege exists, claiming to have witnessed it and even providing clear-cut examples of this reality, but these wealthy, white, conservative males know better. They refuse to believe that the color of one's skin has any bearing on their life experiences or successes. Character, work ethic and a strong family dynamic are the determining factors in everyone's life, they insist, and the amount of melanin one possesses can't overshadow them.

The Fox News hosts are correct that these characteristics are incredibly important, and that many people won't succeed without them, no matter their race or accompanying privilege. But to admit this isn't to deny the distinct benefits that accompany whiteness in nearly every facet of society, from employment to health care. Nor is it denying that the "check your privilege" movement can have its excesses, just like anything else.

On Fox News, however, legitimate debate about white privilege and the way we see it today is largely replaced by something less nuanced: complete denial. 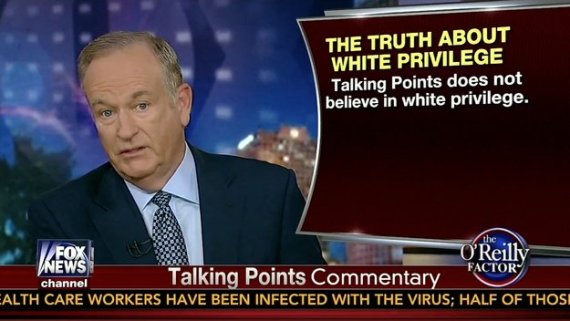 Following a debate with fellow host Megyn Kelly -- who earlier this week offered him a variety of statistics demonstrating the massive inequality between black and white Americans in terms of opportunity, unemployment, poverty, the criminal justice system, quality of education, economic mobility and treatment by law enforcement -- O'Reilly returned the next day to again reject white privilege, without anyone to counter him this time.

In his segment, O'Reilly "white-splained" how it was that "African-Americans have a much harder time succeeding in our society than whites do," even when, according to him, engrained racial privilege doesn't exist. It's the fault of black America and its leaders, O'Reilly said.

“Instead of preaching a cultural revolution, the leadership provides excuses for failure. The race hustlers blame white privilege, an unfair society, a terrible country," he said. "So the message is, it’s not your fault if you abandon your children, if you become a substance abuser, if you are a criminal. No, it’s not your fault; it’s society’s fault. That is the big lie that is keeping some African-Americans from reaching their full potential. Until personal responsibility and a cultural change takes place, millions of African-Americans will struggle.”

New York Times columnist Charles Blow responded to this and O'Reilly's other claims in an article on Thursday, charging that the Fox News host's "underlying logic is that blacks are possessed of some form of racial pathology or self-destructive racial impulses, that personal responsibility and systemic inequity are separate issues and not intersecting ones."

Hannity appeared completely oblivious to the concept of white privilege earlier this month while explaining how he conducts himself during interactions with police. He seemed to suggest that if everyone acted like him, they would necessarily receive the same treatment, regardless of their skin color.

"When a cop pulls me over, I put my hands outside of the car. If I’m carrying a weapon, which I’m licensed to carry in New York, the first thing I tell the police officer is, ‘Officer, I want you to know I have a legal firearm in the car,’" he said. "First thing I say to the officer. He’ll ask, ‘Where is it?’ I’ll say, ‘It’s in my holster.’ And he says, ‘Alright, just keep your hands outside.’ That’s usually the protocol. And then ‘Can I have your license and registration, please? Move slowly.’ And I often would even step out of the car, lift my shirt up so he can see where the gun is. ‘Yes, sir,’ ‘No, sir,’ writes me a ticket.’ Thank you, sir,’ and that’s it. You battle the issue in court."

Reaching for your waist after telling a police officer you're armed is a terrible idea no matter your race, but doing so while black is likely more dangerous. All in all, however, Hannity's casual and simplistic explanation of his dealings with law enforcement demonstrates a complete ignorance of the differing ways in which white people and people of color are often treated by cops. Reports across the country regularly report racial bias in traffic stops, searches and arrests (especially for drugs).

Many activists claim there are additional biases evident in use of force and police killings, though these are harder to measure due to insufficient data and tracking of these encounters, which lead to less accountability for cops.

In May, Carlson brought on a guest to back up his contention that it's "racist" to claim that white people experience a distinct privilege. His guest was Kurt Schlichter, who at the time had recently written a column boiling down the concept of white privilege to “me being better than you.”

“All of us have worked, all of us have achieved something,” Schlichter claimed, arguing that he had become a partner at a law firm due to his hard work, not his skin color. “That is how we measure character, that’s how we measure what the value of a person is, not some arbitrary category imposed by some ponytailed grad students who have taken too many gender study seminars.”

In their interview, Carlson and Schlichter both appear to misunderstand the concept of white privilege. White people are not expected to feel guilty about their privilege or apologize for it, nor are they expected to credit it as the sole or even most important factor in one's personal successes. But it's outrageous to pretend that race (or class, gender, sexual orientation, etc., for that matter) doesn't play a factor in every person's experience, and that society doesn't offer particular privilege to those who more closely resemble the nation's mostly white power-brokers. Apparently, these Fox News anchors have no problem playing make believe.

1 / 17
Ann Coulter Calls Obama "Retard"
Ann Coulter <a href="https://www.huffpost.com/entry/ann-coulter-obama-retard_n_2004828">called President Obama a "retard"</a> during the 2012 election. She made the remark on Twitter after the third and final presidential debate between Obama and Mitt Romney. "I highly approve of Romney's decision to be kind and gentle to the retard," she tweeted.
Getty Images