My Experience as a Detainee at the Canadian Border

I was returning home on a Sunday evening from a leisurely drive to Canada two weeks ago, and the Customs and Border Protection officer in the booth had a blank look on his face. Biostatistics, I explained, is the application of statistics to medicine and public health. "I think that's a bit above my pay grade," he chuckled. I laughed and assured him that he wasn't alone in his confusion. Moments later, my car had been surrounded by heavily armed agents dressed in black and I was being asked to hand over my keys and step out of my vehicle.

I had entered the legal netherworld of the border, and it would be an experience to remember.

As I was escorted into the CBP facility, a modern and shiny glass building overlooking the Sault Ste Marie International Bridge, I jokingly asked if I was being arrested. "I'm afraid we're going to have to place you under temporary detention, Sir."

"Tell us about your travel," demanded one of the interrogators as he thumbed through my American passport. Why did you go to Pakistan last year, To visit my grandfather and extended family, How long have you been in the US, Um, almost my whole life, What were you doing in Canada, I was bored and wanted to go for a drive, To northern Ontario?, Yes, to White River, Did you buy anything?, Not that I remember, I'm going to ask you one more time, Yes, I bought some soda and potato chips, Why are you coming to Michigan?, I go to school in Ann Arbor, Where were you before that?, I was in New York, doing neuroscience research, What does that have to do with statistics?, Um, I don't think you would understand, (silence), Okay, you can have a seat.

I waited for nearly an hour, pacing the corridors of the building, looking through the colorful pamphlets that had been provided for the detainees' reading pleasure, and watched the sun set over the horizon. What's taking so long?, I asked. "Your car is being searched for contraband." Apparently, my pattern of conduct matched that of a drug smuggler, and they just wanted to be sure.

"Is this legal?," I asked. Absolutely. CBP has the authority to search and inspect every single individual who crosses the border. Yes, but you don't actually search and inspect every single person, I've seen over forty cars pass by with nothing more than a few questions at the booth - what's so special about me that I was selected for this unique treatment? (This would later turn out to be the $64,000 question.)

I walked up to the counter and asked an officer how much longer it would take. Why don't you have a seat, he replied. Only it didn't sound like a question. I'm sorry, is that an order? Two other officers had joined him by now, Why don't you have a seat, he repeated. I had a feeling that I was on the verge of getting Tasered or tackled, or both. In a burst of inspiration, I remembered something I had read in one of the pamphlets: "If you feel that the examination was not conducted in a professional manner, ask to speak with a supervisor immediately." Ta-da. I'd like to speak with a supervisor, I announced triumphantly. Immediately, the imposing gentlemen receded into the background as a female officer in her mid-40's stepped forward to listen to my grievances.

A few minutes later, one of the agents walked over and threw my passport on the table, his face contorted in disgust. The supervisor smiled at me. "You've been cleared", she said. "Thank you for your cooperation." She escorted me to my car where I found everything in disarray, papers and clothes thrown around everywhere. Why me, I asked, reluctant to bring up the dreaded "P" word. There were two main reasons, I was informed. The short duration of my stay had raised flags. "You left Michigan at 5 in the morning, drove around the interior of Ontario, and are coming back the same day." And you look well-rested, she said, as if that had been the nail in the coffin.

What a sad reflection on the times, I thought, that I would be viewed with suspicion because I had woken up one day and decided to drive hundreds of miles in search of novelty and adventure. Is this how boring our society has become? Imagine how detrimental such a mindset must be for cross-border tourism, a concern that has often been raised in recent days.

The second and more disturbing reason was my prior international travel. "The world is a huge place, we can't possibly concentrate on every single country." A few days later, I called CBP's Public Affairs Office to ask for clarification. If US citizens with prior travel to South Asia and the Middle East were being selectively targeted for secondary screening, then this would seem to fall perilously close to national origin discrimination. The spokeswoman refused to discuss anything related to policy; "you'll have to file a Freedom of Information Act request," she told me flatly. Does CBP engage in racial profiling?, I asked. "No comment." (She emailed me the next day to change her answer to "No.")

Customs and Border Protection, which was incorporated into the Department of Homeland Security in 2003, has often come under scrutiny for its secretive practices. Last February, the Asian Law Caucus and the Electronic Frontier Foundation filed a lawsuit under the Freedom of Information Act to compel the government to disclose the protocol governing the inspection of travelers returning to the U.S. A similar suit was filed last Thursday by the American Civil Liberties Union demanding information about intrusive searches of electronic devices.

A DHS memo from June 2004 entitled "Commitment to Race Neutrality in Law Enforcement Activities" begins with flowery language about civil liberties and the Constitution. Further down the page, however, one encounters the following "official policy" in classic doublespeak:

Rather than relying on race or ethnicity, it is permissible and indeed advisable to consider an individual's connections to countries that are associated with significant terrorist activity.

Setting aside post-modern paradigms about the social construction of race, doesn't a "connection" to a specific country usually have something to do with race or ethnicity?

Advocacy organizations have documented countless abuses and violations by border officials. The Asian Law Caucus reports of Muslim-Americans being routinely interrogated about their political beliefs and religious views. Despite the government's denials of engaging in racial or religious profiling, one official told me, "under the law, they can, and we believe that they do."

Attorney General Eric Holder's recent appointment of a special prosecutor to investigate detainee abuse by the CIA has been lauded as an indication of a new era in government openness. However, DHS directives released last week indicate no substantive change in border inspection policy is forthcoming. The Washington Post's headline sums it up in seven words: "Bush's Search Policy for Travelers is Kept." Catherine Crump of the ACLU takes a harder stance, calling it a "disappointing ratification of the suspicionless search policy" of the Bush administration.

The evil of profiling is that it dehumanizes its victims, stripping them of their individuality. The border officials didn't see me as a researcher or as a writer or as a wide-eyed student in the grip of wanderlust. To them, I was nothing more than the stamps in my passport and the shade of my complexion. During the hour that I spent as a detainee, I was treated as guilty until proven innocent, my civil liberties held in limbo until police dogs could go over every inch of my vehicle and confirm that no illegal substance had been found. When I was released, no apology was offered - they were just doing their job and my personal inconvenience would have to subserviate itself before the altar of national security. What had begun as a pleasant trip to White River had ended with me getting a firsthand glimpse of the dangers of unbridled government power cloaked in an aura of secrecy - all in an era of "hope."

As I drove away, I wondered if I might have been treated differently had I been an English major. 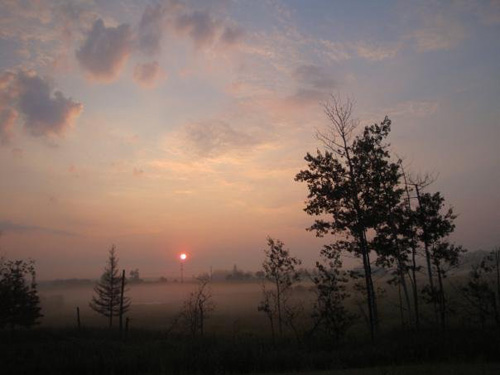