"Green roofs and cool roofs offer the potential to improve the sustainability of urban areas" -- that was the bottom line conclusion of a report released by NRDC and the Emmett Center on Climate Change and the Environment at the UCLA School of Law two years ago. And it's an important (and well-established) conclusion -- our urban environments contribute to, and are in turn threatened by, an increasing number of environmental challenges that these types of sustainable urban practices can help us tackle.

Over the past month, several new studies analyzing the economics and environmental benefits of green roofs and cool roofs -- or white roofs, a type of cool roof -- have been published in national research journals. A number of periodicals and online stories have in turn reported on the studies, shining a light on these much needed green building practices. Unfortunately, several of these stories failed to accurately characterize the research and, overlooking the wealth of existing studies demonstrating the competing and far-reaching benefits of green roofs, unjustly kicked green roofs to the curb. For example, citing a new study by scientists at the Lawrence Berkeley National Laboratory titled "Economic comparison of white, green, and black flat roofs in the United States," popular environmental news outlet Grist.org ran with the headline "White roofs are better than green roofs, and everything's better than black." 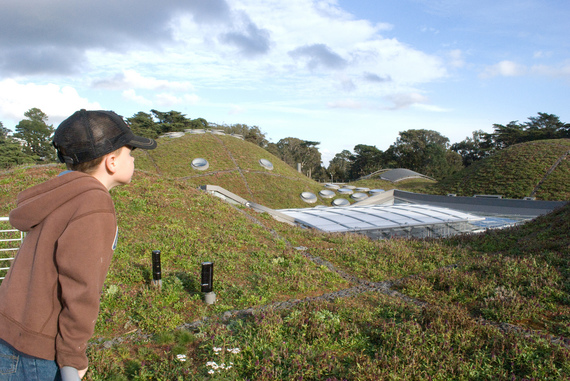 Well, no argument here about traditional black roofs -- they're a source of numerous environmental and public health concerns in our urban environment. Dark impervious surfaces in our cities, like black roofs, absorb and radiate heat back into the surrounding atmosphere in a way that can create urban "heat islands," significantly raising the ambient air temperature in developed areas compared to more leafy rural surroundings. The temperature on a conventional dark roof can also be up to 90 degrees F (50 degrees C) hotter than the surrounding air on a hot, sunny day, with much of the heat transferred down into the building below. As a result, we end up using more energy to cool our building interiors, which increases emissions of greenhouse gases like CO2, which leads to climate change that threatens water supplies, jeopardizes progress in air quality, and endangers human health. And when it rains on hard, paved surfaces like conventional rooftops in our cities, instead of soaking into the ground or being taken up by plants (there's a first hint that green roofs -- made of plants -- can be good for the environment), the water has nowhere to go except downhill -- it flows through downspouts and into gutters and storm drains, picking up and carrying pollution in huge volumes to our rivers, lakes, and beaches.

But that white versus green roof proclamation really raises our eyebrows...

Reading further, Grist states that "You'd think a green roof would be best -- imagine growing vegetables in your very own sky garden! -- but in reality they're not so great. Gardening's hard enough when you don't have to climb out on top of the house to do it, and a new study shows that white roofs are better for the environment anyway."

Points to Grist for wit, and for showing restraint in not running with the headline: "Study: Green roofs suck at solving global warming" as another online news and commentary blog did. But the problem is, Grist's story got picked up and re-posted by a number of other outlets. And still other outlets, without context, printed headlines like "White Roofs Keep Cities Cooler Than 'Green' Ones, Study Finds," or "White Roofs Beat Green Ones On Economics And Climate, New Research Says."

And the bigger problem is, that's not what the study found.

Green roofs (and cool roofs/white roofs, too) can do a lot to reduce the harmful global warming effects that black roofs accelerate. Yes, white roofs reflect sunlight back into space more effectively than green roofs, as the Lawrence Berkeley report pointed out, directly reducing global warming impacts. But green roofs can provide shade and evaporative cooling on rooftops that helps significantly reduce the energy needed for building cooling. And unlike white roofs, green roofs can insulate roofs in winter, reducing the amount of energy needed for building heating. Green roofs can reduce urban heat islands. They can capture and absorb or evaporate large amounts of water when it rains, managing runoff and reducing the amount of pollution being dumped at our rivers and beaches. They create and spur new bird and wildlife habitat. So those sky gardens do good for the environment after all. Green roofs also last twice as long as conventional roofs. And they look cool! They add unconventional beauty to urban landscapes, while making a public-facing and tangible statement about the environmentally beneficial role that buildings can and should play in our communities. 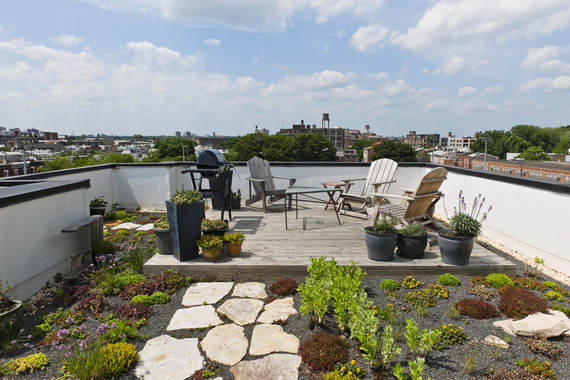 That's what the study showed. As one of the study's authors, Ben Mandel pointed out in comments on a well-reasoned response to claims that green roofs aren't "the most environmentally friendly choice out there," courtesy of the media outlet TreeHugger:

"Our study finds that white roofs are more cost-effective over 50 years than green roofs. We do not reach a conclusion about which is most environmentally beneficial. It is true that one factor our analysis considers is the direct global warming offset potential from reflecting sunlight back into space, for which white roofs are roughly three times more effective (rather than efficient) than green and probably about five times more than black. Any roof that saves on air conditioning energy more than it loses on heating energy, like either white or green roofs in warm climates, will bring indirect climate change benefits from reducing power plant emissions."

And about the cost-effectiveness of green roofs vs. white roofs? As Dr. Mandel points out, "Green roofs offer many environmental benefits that are difficult to monetize for an economic assessment." In other words, the study didn't consider benefits like pollution control from reducing stormwater runoff, or habitat creation, or air quality benefits, or increases in property value. Nor did it claim to -- the study was honest (if a little unclear) in its limitations. And even taking its numbers at face value, as Art Rosenfeld, another of the study's authors, stated in an earlier interview, between green roofs and white roofs, "Is one a lot cheaper than the other? It turns out they are not."

So which one is right for you? It may come to personal choice -- what specific environmental or public health issue an owner is looking to help mitigate, an aesthetic preference, specific site considerations, or any of a number of other factors. Interestingly, it turns out that geography, or at least climate, may be a big factor in any debate over whether to go white or green. In a new study in the Proceedings of the National Academy of Sciences, researchers from Arizona State University and the EPA found that in northern areas, while cool roofs may be strongly effective at lowering a building's temperature during warmer months, they also tend to lower the building's temperature during colder times of year. This means that any savings on energy used for air-conditioning in the summer may be lost to increases in energy used for heating in the winter. For southern areas, white roofs may offer greater cooling benefits than green roofs (though they don't reduce stormwater runoff or provide additional benefits that green roofs do). So each represents trade-offs for building owners and developers to consider. The good news is that, white or green, the Arizona State study points out that smart choices in urban planning and design "cannot only counteract the climatological impacts of the urban expansion," but can also "offset a significant percentage of future greenhouse warming over large scales."

The bottom line conclusion? Anyone reporting today on the state of rooftops should be running the same headline -- "Green or white, new rooftop materials are a win for the environment."