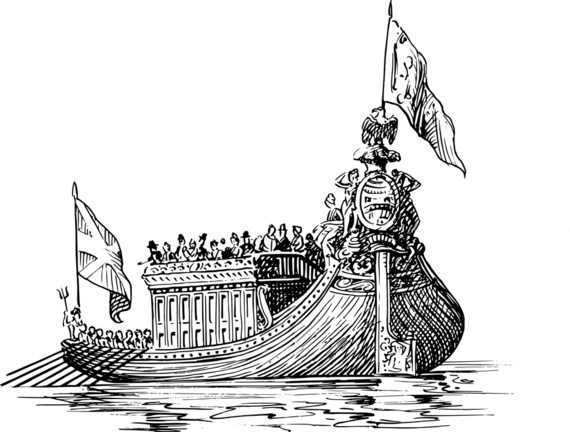 It should come as no surprise, but it does for many, that money merchants founded and continue to govern America. See Debt Serfdom in America - Part 1. The dominant narrative that America was established by "puritans" and "pilgrims" escaping religious atrocities sweeping across Europe is incompletely correct, used mostly for myth-making and finding a respectable origin for a powerful nation, the United States of America . But the dominant narrative conveniently if not deliberately whitewashes the plight of wretched debt servants brought from Europe to make profits for entrepreneurs. Just as vulnerable migrant workers are now imported from across the Mexican border to slog in the fields, poverty-stricken Europeans were transported from across the Atlantic to toil in the "New World" for the benefit of venture capitalists. An indentured servant --also known as debt servant or peon--is given money upfront and placed under debt. The person receiving money (or some other benefit such as free voyage to a distant land) contracts a legal obligation fortified with criminal penalties to work off the debt by providing labor to the original money master or his assignees. As debt servants have recurrent need to borrow money to meet monthly expenses, they remain trapped in cyclical debt. Runaways, like fugitive slaves, are apprehended and imprisoned or returned to the master. Venture capitalists used debt servants (known as peons in Spanish colonies) for economic exploitation of new lands. Debt servitude has been a potent legal alternative to slavery. In common law, venture capitalists and their political allies in the British parliament introduced the idea of stock company, a forebear of modern day corporation. The East India Company was launched in 1600 to make profits from ventures undertaken in the "spicy" East Indies. The Virginia Company of London (VCL) was chartered in 1606 to make profits from ventures commenced in "savage" America. Other stock companies were initiated to establish and operate settlements. Stockholders in these companies were no philanthropists, moralists, or humanitarians; they were speculators eager to make money by investing money into exotic ventures. These companies were open to operate by any means necessary, resorting to all forms of human trafficking, to make profits for stockholders. From establishment of the first colony until well into the eighteenth century, the principal source of labor (from 50% to 75%) in mainland colonies was indentured servants shipped from England, Scotland, Germany, and other parts of Europe. Religious strife tearing apart Europe was God's gift for money merchants as the strife made debt servants cheap and readily available. Money merchants and venture capitalists offered entire families "free voyage" to debt servitude in America. Even Africans were first brought as indentured servants. In1641, the Massachusetts slave traders passed the first slavery law setting the trend in American colonies. It was color-blind slave legislation. Colonial money merchants and their scions, much like money merchants today, cared little about racial characteristics or national origin since working hands were desperately needed to exploit the land and natural resources forcibly taken from Native Americans. As money merchants and venture capitalists relished their wealth, they found it commercially logical to cast a wider net of debt servitude to ensnare Native Americans, Mexicans, and free and freed Africans. Debt servitude turned into "an equal opportunity employer" for the poor and the wretched without distinction of race, religion, color, national origin, or gender.

Millions of white Americans living today are the descendants of indigent Europeans brought as indentured servants. Historically, white Americans have much in common with African Americans, Mexicans, and Native Americans than they do with money merchants and venture capitalists -old money or new money-- who take delight in turning social and racial divisions into cheap labor.

In 1785, almost three hundred years after Christopher Columbus' "discovery" voyage, the British Parliament passed a law to prohibit transporting debt servants on English vessels. Conveniently though, other vessels were still available. Furthermore, the European royalty and money merchants remained open, as before, to ship convicts to American colonies. These convicts, much like indentured servants, were used as cheap labor. These convicts married and procreated. Their progeny faced difficulty in melting with the offspring of affluent families. In the process, the derogatory term "white trash" was invented to describe poor white families, mostly living in the South. White servitude, much like slavery, was stereotyped as morally deficient and criminal. Other derogatory terms, such as Okies, Hillbillies, and rednecks, are also employed to degrade poor white families first trapped in cyclical debt and later in recurring poverty.

White servitude continued to persist even after the post-Civil War enactment of the Thirteenth Amendment, which abolished slavery and involuntary servitude except for crimes. Note that money merchants and their cohorts in legislatures found no moral imperative to close all doors to involuntary servitude. Convicts as social outcasts have always been the most vulnerable targets for involuntary servitude. Note also that involuntary servitude is a much broader term than debt servitude. In 1867, Congress passed the Anti-peonage Act to specifically suppress peonage, a model similar to debt servitude, borrowed from the Spaniards, which was rampant in New Mexico and other places. Sometimes laws are merely good wishes, sometimes smoke and mirrors, sometimes blatant lies, and sometimes bad-faith attempts at correcting mighty market forces. The servitude market was building venture capitalists and money merchants and its bounties were lucrative for entrepreneurs, tobacco and cotton growers, railroads, and other industries. They all needed low-cost and reliable labor. In 1906, Federal investigations exposed the vibrant presence of European immigrants "who were lured to the South by promises of high wages but found themselves in debt working as peons in railroad and turpentine camps."

Racial and ethnic rivalries in America hide the hideous role of money merchants that create debt and debt products to lock in labor and services. Millions of Americans, the progenies of slaves and debt servants, reject all forms of racism as a cruel ploy that money merchants, venture capitalists, entrepreneurs, and morality-free politicians (including Donald Trump) freely exploit to divide and rule vulnerable people unmindful of historical mistreatment of their forefathers and foremothers. Most Americans, regardless of race, religion, national origin, and gender, have much in common than idiotic racial distinctions invented to separate them. Shared servitude is the foundation of America and there is no shame for any family in rising from the bottom of the pyramid built by Pharos. If rich and influential families trace their roots to some sort of European aristocracy, their ties to the people matter little because, in light of history, their ways are in opposition to the ways of the majority.