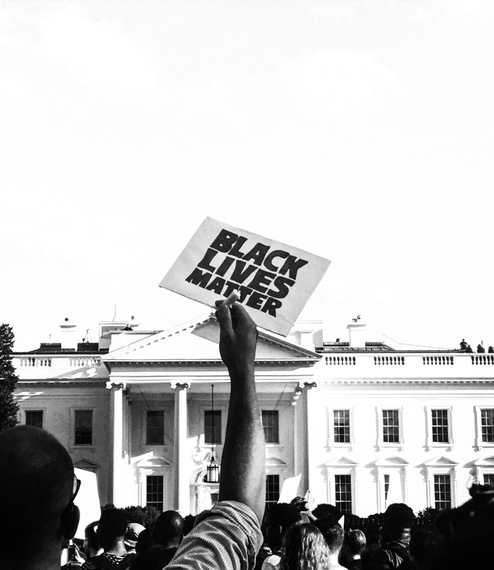 There are many thought-provoking videos and articles being circulated on social media after America's week of tragedies. One in particular has stood out to me.

A white woman, race educator Jane Elliot says to an auditorium full of people "I want every white person in this room who would be happy to be treated as this society, in general, treats our citizens - our black citizens - if you, as a white person, would be happy to receive the same treatment that our black citizens do in this society, please stand." Unsurprisingly, no one moves. She pauses. "You didn't understand the directions. If you white folks want to be treated the way blacks are, in this society, stand." More marked silence and lack of movement. She continues, "Nobody's standing here. That says very plainly that you know what's happening. You know you don't want it for you. I want to know why you're so willing to accept it or to allow it to happen for others."

I want to know the same. White America, it is time for us to stand up and take a stand against injustice.

My route home from work takes me in front of The White House every day, and on Friday as I walked by, I found myself in a Black Lives Matter march that ended in front of our President's home. As I stopped to join, my eyes brimmed with tears for all our country has endured this week. I felt an uncomfortable shame to be part of the race causing such injustice to those who have historically been "othered" by our race.

Embarrassed and ashamed, in that moment, I wanted to shed my whiteness like a snake sheds its skin.

I feel it too, White America. What our race is doing in this country is uncomfortable, disgusting and criminal to say the least. Like an ostrich sticks its head in the sand, it might feel easier for one to ignore the institutional, social and economic structures of injustice we have imposed on our fellow Black Americans than to take up the mantle ourselves. But that desire - to hide from what is uncomfortable and wrong - is exactly the problem.

Wanting to shed our whiteness out of embarrassment and anger, wishing this all away instead of actively fighting, is an active decision to commit further injustice. Whiteness is, like it or not, an asset that we can and should use to promote equitable change. Our role in fighting for Black Lives is critical - if Black America could have solved this without White Americans, they already would have. It takes all of us to fight hard and meaningfully.

Guilt, discomfort and grief will not solve the problem alone. We cannot depend on empathy to save Black Lives.

Rather, we must embrace our discomfort and act.

My fellow White Americans, if we remain silent and uneducated - if we refuse to proclaim Black Lives Matter - then we might as well be holding the gun ourselves. Silence allows oppressors to continue to oppress. Silence is acceptance - and most of us don't want to, cannot, must not -accept a world where more black men were killed by police in 2015 than were lynched at the height of Jim Crow in 1892, a world where Alton Sterling, Philando Castile, and four Dallas cops no longer walk.

Above all, we must educate ourselves. Have critical and difficult conversations with the people we love - especially those that have not been vocal. Make a required reading list: this curriculum is a great start, designed for White Americans to educate themselves on race and racism outside of our public school "education" on the Civil rights era. Or this article on being a white ally. Or this one. Read informative books, blogs and articles by people of color. "Dear White People" is both a book and documentary that can serve as a great jumping off point.

Ask yourself what you don't know and don't understand - and then seek to understand it. I know I still have a lot that I need to learn.

Above all else, we should listen - deeply, and openly, without defending ourselves for being white. Admit to yourself and your fellow White Americans that you're uncomfortable - and push past it, using that discomfort as a vehicle to get productively angry. Talk about violence against Black Lives until what made you uncomfortable is now something that you're actively working to change. Decide what solidarity means for you, and then take it a step further.

In the words of Martin Luther King Jr., "The ultimate tragedy is not the oppression and cruelty by the bad people but the silence over that by the good people."

We can - we must - overcome oppression. The safety of Black Americans depends on it. But overcoming, pushing forward, not living in a world with the senseless tragedy that has so rocked us this week, requires each and every one of us to acknowledge the role we can play in doing so. Loudly, frequently, critically. Together.

Violence is not the answer. But neither is silence. Instead, we must all resolve to use our privilege for good. We Shall Overcome.