FORD BEACH, FLORIDA -- Bill Ricci describes himself as a "white nationalist" and a "race realist." He admits that many others who do not share his views have referred to him more simply as a white supremacist. Ricci says, however, that it's not just the different races he's pragmatic about.

"I know Donald Trump probably ain't gonna win," Ricci told our reporter, "and that sure does take the wind out of my white sheets." 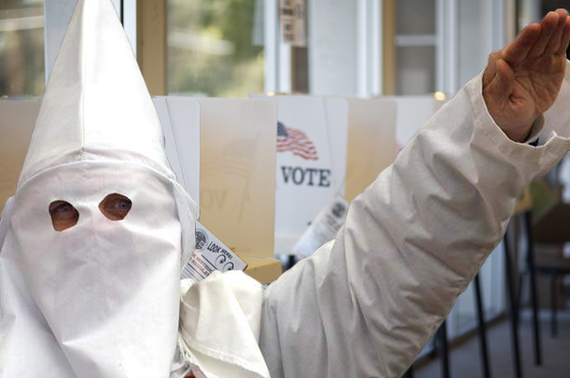 As sad as Ricci is about Trump's likely impending electoral doom, he says he's choosing to remain positive and "focus on the beautiful, bright white future" Trump has inspired within the white nationalist movement.

"Before Trump came along," Mr. Ricci said, "Republicans worked for our votes, but they did in much subtler ways. It kinda makes you feel like maybe your particularly bleached world view isn't all that welcome when you can't be loud and proud about your sincerely held belief that your skin color somehow makes you a superior human being."

The Trump campaign has inspired Ricci and several of his racist friends to take to Twitter and other social media platforms with pride and a pseudonym that contains the word "Deplorable" to harass and stalk anti-Trump voters. Ricci said that pride has now grown to the point that he feels confident vetting candidates for the 2020 election. He says that it will be extremely important to keep Hillary Clinton a one-term president.

"I'm not exactly sure who we're going to pick," Ricci said, "because we had no idea the Good White Racist Lord would drop the Orange One in our laps like we did. But I have some ideas."

Ricci said that the whoever he supports in 2020 must meet at least a handful of the most vital criteria he has in mind.

"Firstly," Ricci told us, "I want to hear him swear a blood oath the Constitution but also to the Holy Bible that inspired it, and the one, true, White American God who gave permission for it to be written."

Secondly, Ricci says, he wants his 2020 candidate to "be just as dumb, if not dumber" than Trump.

"We can't have no elitist intellectual like George W. Bush no more," Ricci said, "we need a leader who understands just how pointless and downright dangerous education can be. I want my president to know his rightful place in our planet's 6,000 year history."

Also of note, Ricci says that he wants a presidential candidate who can "inspire other people to try out racism."

"For a long time now," Mr. Ricci said, "racists have had to get quieter and quieter. All of a sudden we had to stop telling people blacks are just more violent because of their DNA and we had to use other nonsensical excuses for our racist beliefs like the breakdown of the nuclear family in black America -- even though white divorce rates are tremendously high for instance. Donald Trump, even if he loses, has inspired us to make America great and unabashedly racist again."

Before ending the interview, Ricci gave us a shortlist of his most favored candidates this early in the process.

"David Duke, Alex Jones, the reincarnated spirit of George Wallace," Ricci rattled off, "or maybe Zombie Jefferson Davis, Klan robes stuffed with orange diarrhea so that people still think it's Trump, or I might just go with one of the many Republicans who actually endorsed him, I'm not really sure. There are a lot of racists out there to choose from, as it turns out."