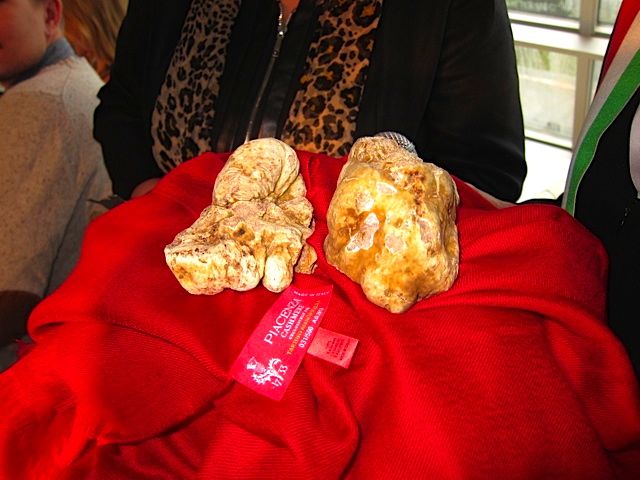 Gastronomes are well aware of the deadly upward spiral of the Alba white truffle, the jewel of Italian gastronomy. Priced at under $1000 a lb. within my memory (which seemed expensive then!), this very special tuber has climbed over the years...past $1500, past $2000, and, in the 2012 season, over $3000 a lb.

But according to Mauro Carbone, General Manager of the company Tu Langhe Roero (which promotes this truffle-growing area of Piemonte around the world), 2013 is different. "In fact," Carbone told me in New York last week, where he presided over the Alba International White Truffle Fair, "2013 is the best white truffle harvest we've had in the 21st century." Don't mistake this talk with wine-world "vintage of the century" hype. He means it -- and he can explain why all the other years didn't get the right blend of elements.

"The harvest cannot be too dry," he told me. "You need moisture, because the water molecules in the truffle carry the aroma to the nose. Nor can it be too wet, for fear of mold. And there must be just the right ambient temperature during the growing season, neither too cold nor too warm, in order for the truffles to grow to the proper size, and develop the proper flavor."

"2012," he continued, "was a disaster. The extreme dryness caused extremely low quantity -- which, coinciding with the unprecedented international demand for white truffles, resulted in a market gone wild. We saw prices as high as $3500 for a pound. And the irony was...the truffle quality in 2012 was not good. These water-starved truffles were not very fragrant."

And that's why everyone is so excited about 2013. The quality is marvelous...and, due to a bumper "crop," the price is down in some cases by as much as 40%. In the U.S., it's likely that the day of the $2500 truffle has returned! "But don't think of it that way," said Carbone. "Just think about your nice bowl of pasta at a restaurant which can be showered with truffle slices this year for only about $30 extra!"

The Fair's chief business in both venues was to cut a ribbon, which symbolically created access to the stars of the event, the 2013 truffles. In New York, the ribbon was cut by none other than star chef Lidia Bastianich, who has been retained as the Alba White Truffle Ambassador. 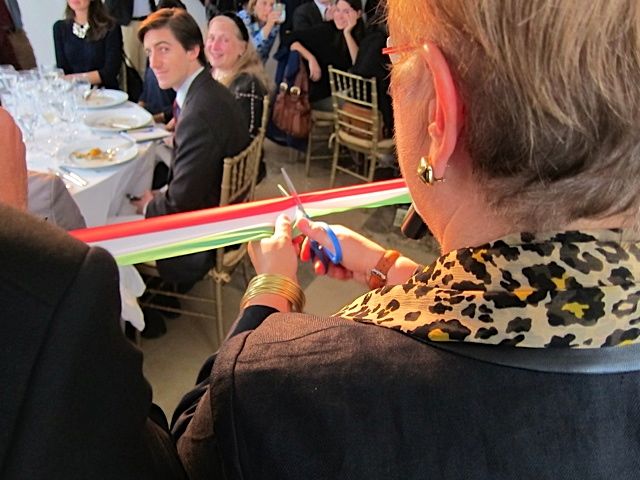 At just the right moment, Mauro Carbone displayed the new truffles in New York...right under the screen of his counterpart in Alba displaying the new truffles.... both the New York platter and the Alba platter being swaddled in red. 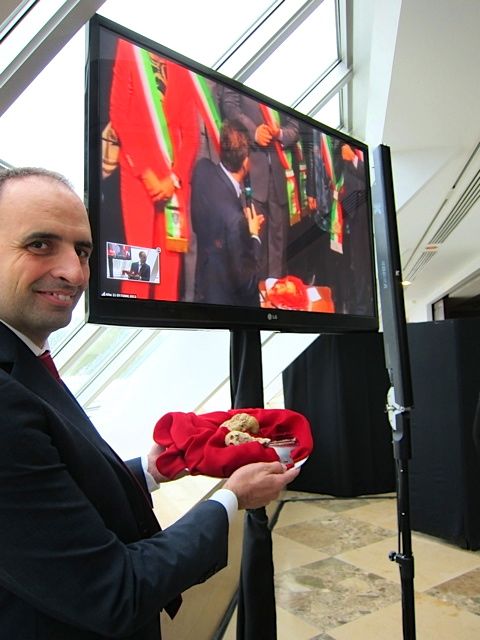 Carbone beaming with truffles before the big TV screen

I spoke with Bastianich about the 2013 white truffles, and she agreed they were something special, even before you consider the price. 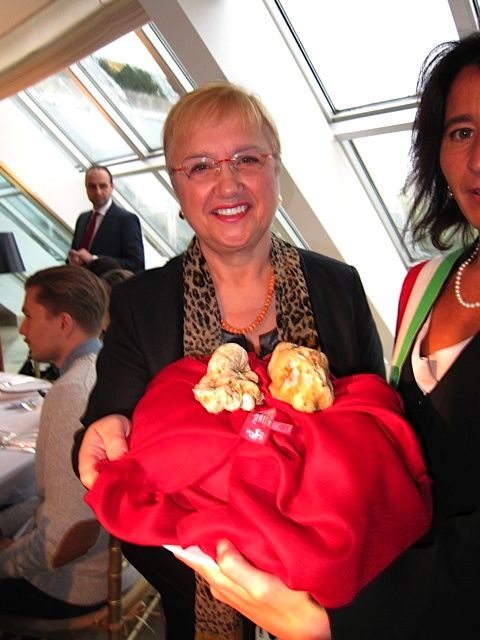 The stars line up

"Extremely fragrant," Lidia opined. And she went on to point out that the most fragrant truffles often have a pink shading on the outside... which Lidia found to be abundant in the 2013s. 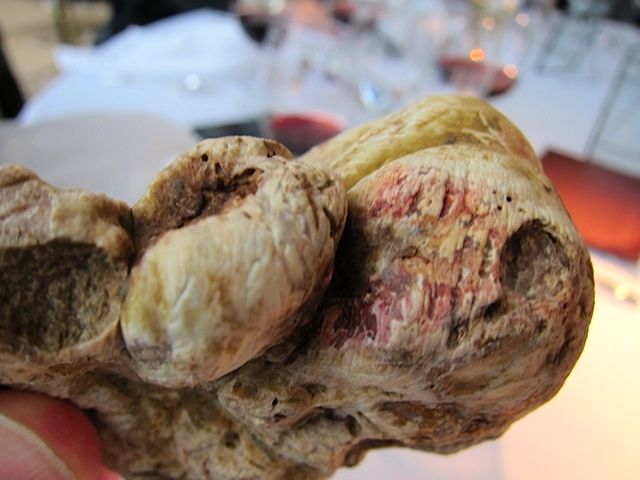 White truffles with the much desired pink shading

"When they're really fragrant," Bastianich went on, "the aromas and flavors remind me of an exotic combination of musk oil, garlic and horseradish." 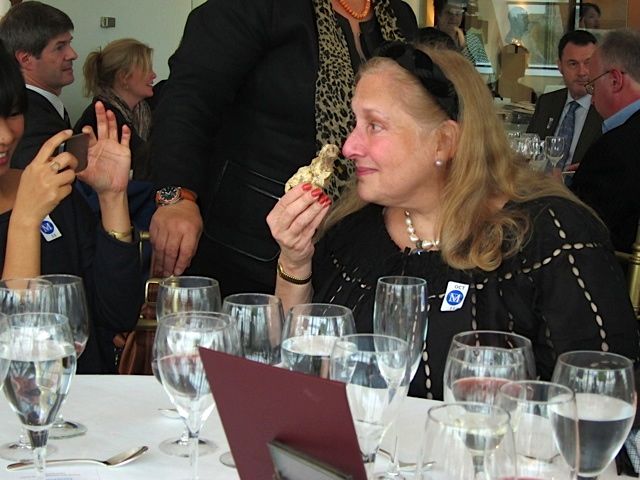 One of the guests, just handed a truffle by Bastianich, sampling the 2013 harvest

And then there was lunch.

As Bastianich explained, the explosive flavors of the truffle are best retained when no cooking is involved; merely shaving thin slices on the right foods brings the maximal flavors to the palate (Bastianich was quick to add that black truffles, the pride of France), "usually need some cooking to bring out flavor." She also said that her favorite white-truffle-shaving target, hands-down, is a wet, creamy mass of scrambled eggs.

But the menu on this day began with a Piemontese specialty, Filetto Crudo di Vitello -- a kind of carpaccio, but often made in this region with veal. 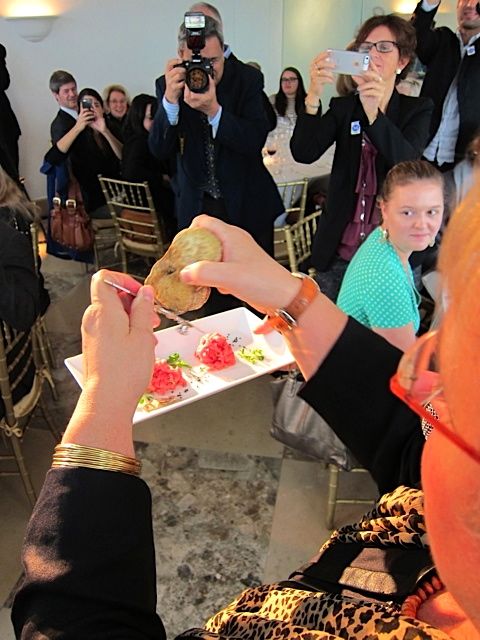 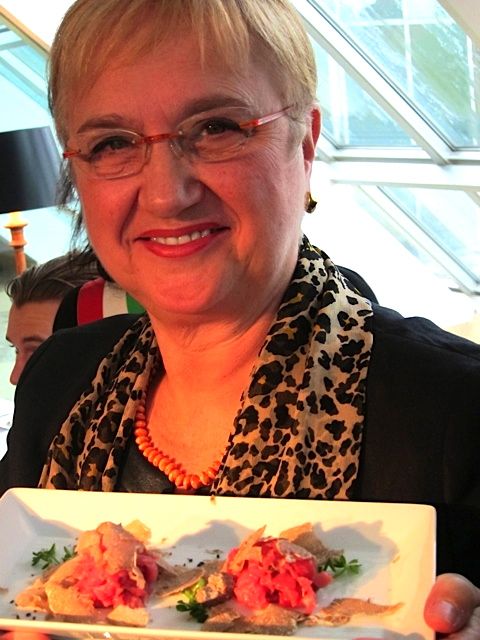 Bastianich with veal, ready to go 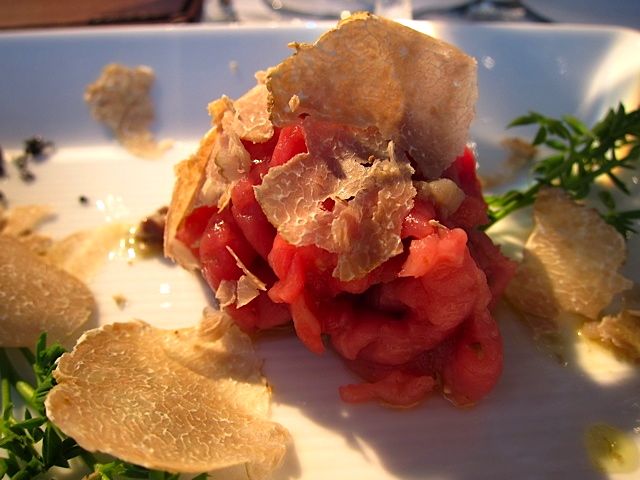 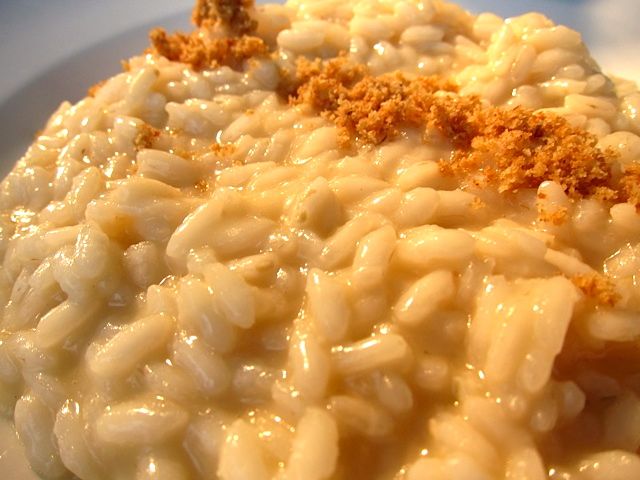 The rice before truffles, only with toasted breadcrumbs 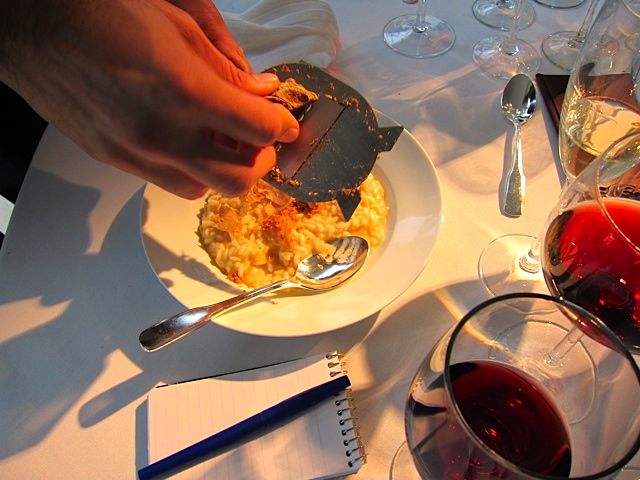 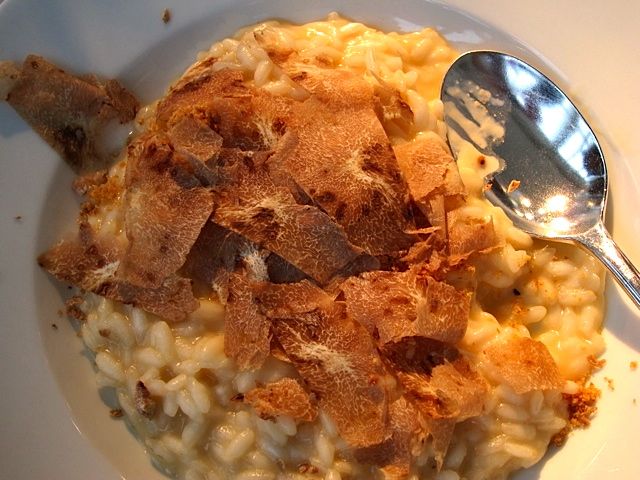 Risotto with its marvelous crown of shaved white truffles

As a final note, Bastianich told us that if you do buy a white truffle to use at home -- ignore the usual storage advice! The standard wisdom is to keep the truffles in rice. But Bastianich says that the rice "takes the flavor from the truffle." It is much better, she pointed out, to "brush the truffle lightly, wrap it loosely in a humid towel, then place in a plastic container with a lid." Bastianich says they will last 10-15 days -- but not in my house!