It seems everything I write these days is from a post-chemo perspective not because I still suffer the effects of the experience, actually quite the opposite. The upside of cancer -- as I like to call it -- is that nothing looks the same as before. As if borrowing eyes from Alice in Through the Looking Glass, what seemed clear, solid and sensible before can be rather vague, distorted and almost absurd. Not unlike the feeling of a documentary I saw this past week called "Southern Belle" which premiered Saturday April17th at the Nashville Film Festival.

In full disclosure, I know both of the Award winning Producers, Kathy Conkwright and Mary Makley, the filmmakers of "Southern Belle." And while I would certainly be biased in offering a critique, this is in no way a film review. The film is simply a mirror that -- depending on the perspective of the viewer -- reflects either a distorted view of history which glosses over the oppression and brutalization of African people for the good of the South, or the "good old days" when woman's petticoats, curtsying and knowing how to keep ones voice from being shrill were imperative to white female survival.

In Southern Belle we are given a glimpse of a week long camp in Columbia, Tennessee in a program where young women are given the opportunity to re-live the summer of 1861. All giggles and excitement, the girls dress in beautiful gowns of the period for one week and are required to stay in costume during the entire time. They endeavor to "act like ladies" and this includes learning to hold a teacup, a conversation and the attentions of a man.

This week long program is meant to be a reminiscent of a fairly unique, and at the time, a progressive program called The Columbia Athenaeum School. The founder Reverend Franklin Gillette Smith originally founded the Columbia Female Institute in the late 1830's but retired in 1851 to start the Athaenaeum.

Although Rev. Smith believed that the intelligence level of women was equivalent to that of men and offered courses that were traditionally available to only men such as calculus, physics, and marine biology, there was little evidence in the film that women need be concerned with anything beyond needlepoint, choosing the right gown and hairpiece for the ball and the importance of sparkling conversation--while letting a man lead when waltzing.

During one of the first scenes we witness the girls receiving a "history lesson" by a man dressed in full-length black ministerial garb. He is playing the character of founder Rev. Smith and, in character, he conveys the events of the day so that the participants can better understand the world they are about to inhabit.

He explains to these wide-eyed young women who are eager to dress up in period costume and "role play" that there is a huge movement to rid the south of all forms of slavery -- something the South is 'unfairly' being blamed for. We are told that unfair taxation is the primary reason Tennessee has seceded from the Union and there is barely a "hinting" at slavery.

"Rev. Smith" then proceeds to ask the young ladies if any of them remembers what it says in the Bible about being a slave? The answer that comes is matter of fact: "the Bible instructs us that we are to obey our masters". And, as if to further deviate from reality, we are informed, in a matter of fact fashion, there were actually a greater percentage of negro slave owners than not. No questions, no objections.

Early on our Rev. Smith character informs us that "blackness and whiteness" will not be mentioned in the week-long program. It is, however clarified that the girls are responsible for doing everything for themselves -- including getting themselves dressed -- which is "something their slaves would have done for them during that time". And that is the end of discussion about slavery.

It is impossible to watch this film and not understand how matters of slavery and brutality have become so confused and white washed in the minds of many and there are the same old nagging questions that rise up. Is it possible that by glossing over that past, we continue to ignore the present --hoping against hope to avoid feeling bad or uncomfortable? And, is it possible that some of the contemporary issues that continue to divide this country into right/left, conservative/democrat stem from this staunch and consistent denial of our past?

While there is nothing inherently sinister about conducting a summer program for girls to play dress-up or to experience another moment in time, some will wonder whether the blatant distortion of history conveyed in this film without question, isn't a valuable opportunity missed? And one wonders if by experiencing the South through a Disney lens, these young women are robbed of a valuable chance to understand the contradictions and inconsistencies at the root of current conflicts like the Tea Party movement.

What is most ironic (and disturbing) about Southern Belle is that throughout the film when the young ladies were interviewed about the time period they were re-enacting, there was much parroting of what they had learned related to 'states rights', 'equal rights' and 'women's rights'. And yet, human rights for Blacks was somehow never mentioned. As if just having a revelation, one Southern Belle reflects on how "Northerners" think that 'all' the slaves were mistreated but clarifies how this isn't actually true and how "not all" of them were beaten either. She further, and earnestly, intimates that some were even treated like family -- as if being allowed in the house were proof positive.

Clearly the upside is that for some of the girls, building self-esteem, making new friends and having fun are worthwhile takeaways from a program such as this -- although it is debatable if teaching a girl to silence her voice -- so as not to bring attention to herself -- is a valuable lesson in 2010. But it is impossible not to wonder whether or not the Alice in Wonderland distortion of facts might not be responsible for grooming the leader of next Tea Party movement -- or even worse?

In keeping with the upside down world of Alice, it is alleged that in 1851 the real Rev. Smith, who believed so fervently in the value of a young woman's intellect, resigned from the Columbia Female Institute due to alleged improprieties with a student. Perhaps he couldn't resist the charms of the very Southern Belles he deemed worth cultivating. But like other disagreeable topics -- including slavery -- this unsavory detail was never alluded to in the film either. I guess it just wouldn't be lady like. 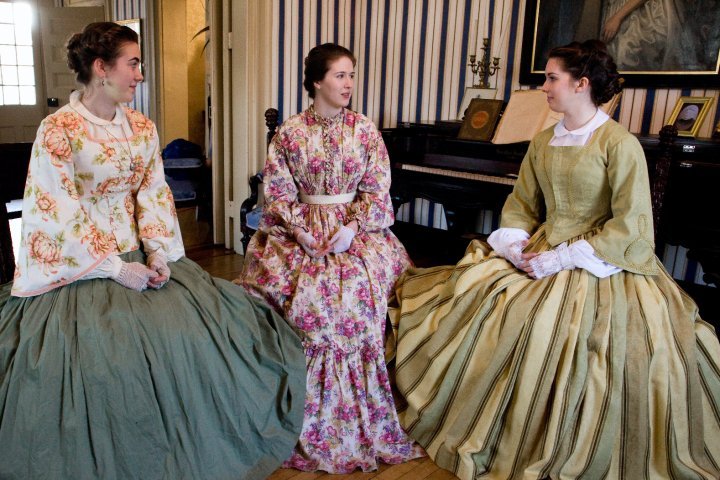