You wouldn't know it from the jacket description or even the author's introduction, but Josef Joffe's new book The Myth of America's Decline: Politics, Economics, and a Half Century of False Prophecies (Liveright/Norton, November 2013) is actually three books in one. 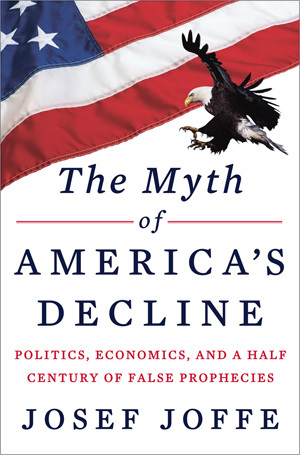 The first is the book promised in the title. The second, which comes as something of a surprise in the volume's later chapters, looks at America's "liberal imperialism" past and present and advances the argument that the United States must continue to serve as the world's "default power" if we are not to suffer the worst in an already tenuous global order. And the third... Well, actually there is no third book, just a question -- the question that haunts the first two books; the question that has become all the more critical and urgent in light of the horrors of the Syrian civil war, the Assad regime's use of chemical weapons, and the role of Al Qaeda in the insurgency; the question that Joffe may well have had in mind all along but which he only clearly pronounces on the penultimate page of the text when he states: "The question of the twenty-first century is whether the decathlon power [America] will still act as the default power."

Joffe, the American-educated editor of the German weekly Die Ziet and an Abramowitz Fellow at the conservative Hoover Institution "think tank" at Stanford University, does an effective job of laying out his cases in the first two books. But his failure to address the critical question -- the question of America's will to act -- is telling and one cannot help but think that, consciously or unconsciously, he resisted doing so because it would have demanded that he deal with not just the state of American power, but also the state of the American people.

In book one, Joffe masterfully refutes the idea that America is in decline. Indeed, he pretty much says "Stop worrying." When it comes to the hardcore question of "power" -- military, economic, and political power -- America remains Top Dog and it will likely remain so for quite some time.

Reflecting on American history from its earliest days, Joffe says "'Decline' is as American as apple pie." Nevertheless, he does not dismiss such talk as nothing more than our own unique and entertaining cultural dish. Reviewing its several manifestations during the past fifty years, Joffe recognizes both how in every instance it has been incited by real historical events and developments and how for better or worse, the rhetoric -- which over and over again proved to be overblown -- has served real political purposes and ambitions. Looking skyward to Sputnik in the late 1950s, we were told the "Russians are coming"; confronting the War in Vietnam and witnessing popular rebellion in the streets in the 1960s, we were told "America is unraveling"; enduring stagflation, energy crises, and a series of international setbacks in the 1970s, we were told that we were suffering from a collective "malaise;" burned by Japan's "Rising Sun" in the 1980s and the economic resurgence of Germany and a United Europe, we were told we weren't "productive" enough and should ready ourselves for a Japanese industrial takeover; and now -- after having won the Cold War and enjoyed a decade-long reprieve from talk of decline -- we are told "The Chinese are coming!" on all fronts. But Joffe insists that, just as the politicians and pundits who preached declinism and "doomism" were wrong before, they are wrong once again.

Holding up the figures for all to see, Joffe shows us that the American economy remains the largest and most productive ("the numbers for 2012 show the U.S. economy at $16 trillion, almost three times the size of Japan's and more than twice the size of China's"); that the American military is vastly superior to all others (on land, the air, and sea, as well as in space); and that America's political power and influence in the world are unequalled. Moreover, he insists, the United States is not likely to be overtaken any time soon. He not only confidently predicts that China's persistent authoritarianism, corruption, and "familism and fatalism," as well as "the prospect of social unrest," will seriously inhibit China's strength -- indeed, he says they are already taxing the Chinese economic-growth model. He also confidently projects that, propelled by both its historic ideals of freedom and a critical awareness of what is in its own best interests, the United States will before long face up to the "three D's of Deficits, Debt, and Dysfunctionality" and renew itself through education, innovation, and immigration.

So, is it time to break open the champagne? Not quite. After writing with seeming assurance of America's prospects, Joffe does not pop the cork. While he does not disavow what he has just said, he warns us that "Just because Declinists have always been wrong, does not guarantee that they will never be right." Politics matter, of course.

In the unexpected second book, which might well have been titled America, the Indispensable Nation (quoting Bill Clinton's remark of 1977), Joffe takes up the question of what America needs to do with its essentially unrivaled power. Distinguishing America's liberal empire, which ever since FDR has "managed to combine both welfare and world-order politics," from the vast empires of the past, which always involved outright conquest and colonialism, and rightly noting how the post-Cold War global order of nation-states "is like no other" in that the pressing issue is no longer how to "balance" competing forces and alliances but how to sustain the international system when so many different, diverse, dangerous and potentially destructive ambitions are in play, Joffe proceeds to argue that the United States must fulfill its role as the essential "Default Power." Not only is America the only nation that can. As Joffe presents it -- and despite our political differences I agree with him (I can already hear the attacks from my friends on the left!) -- the United States is also the only nation you truly would want to have do so: "The creed of a liberal empire does not guarantee benevolence, as America's many imperial ventures show... Yet a liberal polity comes with a mindset and the habits that turn zero-sum into non-zero-sum games. When 'liberal' trumps 'empire,' the United States has been able to transform raw power into consent, and selfish ambitions into authority." Again, politics matter, of course.

Joffe does not foolishly assert that America can simply control the global order. In fact, he reminds us that "the United States never could lord it over the rest in the sense that it got its way everywhere, not even at the height of its soi-disant unipolar moment, and certainly not before, when its power was checked directly by China in Korea and indirectly by the USSR in Vietnam." Which leads him to metaphorically cite the Olympic decathlon of 2012: "Other nations excelled in individual sports, but the United States scored gold and silver in the ten-discipline contest, as it had in most Olympics since World War II." And thus he dubs the United States the "Decathlon Country."

Yes, the United States remains the essential power -- the only power that can "contain and socialize Russia and China," the only power that can "defang Iran and Terror International," the only nation truly capable of mobilizing the necessary coalitions to sustain a "rules-based world." And yet, Joffe acknowledges, the Decathlon Power that must still serve as the Default Power has become a "reticent power." And thus the question that haunts the book is revealed.

In the phantom third book -- let's call it Whither America? -- or better yet, let's title it, in the words of Abraham Lincoln, The Last Best Hope of Earth -- Joffe presumably would have explored the causes of American reticence. He might have referred to our usual reservations about military interventions. He might have made more of the tragic tales of Iraq and Afghanistan. And he might finally have attended to the "numbers" regarding not just contemporary American power but also contemporary American life.

But he didn't. And I imagine he didn't because doing so would have compelled him to face up to how conservative Republican politicians and the corporate rich, with the deference and at times collusion of Democratic centrists, have treacherously denied America's historic democratic purpose and promise, pursued class war from above against the nation's middle and working classes, and sought to reverse the liberal and progressive advances of the long liberal age that extended from the New Deal of the 1930s to the Great Society of the 1960s.

Why are Americans reticent about exercising American power? Because the powers that be have crushed their unions, moved their jobs overseas, emptied their retirement accounts, foreclosed on their homes, wrecked their communities, and -- while avariciously lowering the taxes of the rich -- sent young American men and women to fight wars overseas that drag on forever in seemingly god-forsaken places. And what do Americans see after 35 years of class war from above? The rich have gotten grossly richer and inequality has intensified; the nation's industries and infrastructure have decayed; the future is less promising than ever; and we appear to have forgotten who we are and what we are about. So, why the hell should Americans now want to fight in Syria or anywhere else?

If the United States is to serve as the default power -- and Joffe is right, it must (though for starters we need an administration that knows how to mobilize international coalitions) -- then we Americans need to start acting like our parents and grandparents did. Which is to say, as FDR advised in 1930, that we need to make America "fairly radical for a generation." And acting patriotically, we must once again extend and deepen American freedom, equality, and democracy.

That's what we need to do. And that's what the world needs us to do. Otherwise, the myth of America's decline will become the history of American decline.

Harvey J. Kaye is Professor of Democracy and Justice Studies at the University of Wisconsin-Green Bay. He is the author of Thomas Paine and the Promise of America (FSG 2005) and the forthcoming The Fight for the Four Freedoms: What Made FDR and the Greatest Generation Truly Great (Simon & Schuster, 2014).