A Beginner's Guide to Bitcoin

I'm engaged in a fascinating project -- interesting both because I started from total ignorance and because the subject is complex and profound. I'm helping the Fondación Innovación Bankinter pull together a colloquium on "The Future of Currencies: Bitcoin, Barter, and the Informal Economy."

If you're unaware of Bitcoin, the underlying fact is that it is a cryptography-based method "to establish trust between otherwise unrelated parties over an untrusted network," quoting Mark Andreessen's primer in the New York Times. He sees this breakthrough as in the same league with PCs and the Internet. While this capability -- establishing trust -- could have many applications (passing secret messages, for example), the one that's attracting public attention now is as a peer-to-peer payment system and digital currency, or "cryptocurrency."

For the past three months, Bitcoin has been in the news constantly. The Winkelvoss Twins, of Facebook fame, were reported to have profited from a $30 million position in Bitcoin, and quoted as saying the price of a Bitcoin, then about $700, would reach $40,000. Whatever the long term may hold, there's been plenty of room for speculative profits lately, with the price fluctuating between $500 and $1,200 for the past few months (see chart below). This has at least in part been driven by news, good ("Overtstock.com Is Now Accepting Bitcoins") and bad ("Flaw in Bitcoin, exchange shutdowns, $2.7 million theft: Is the end coming?") 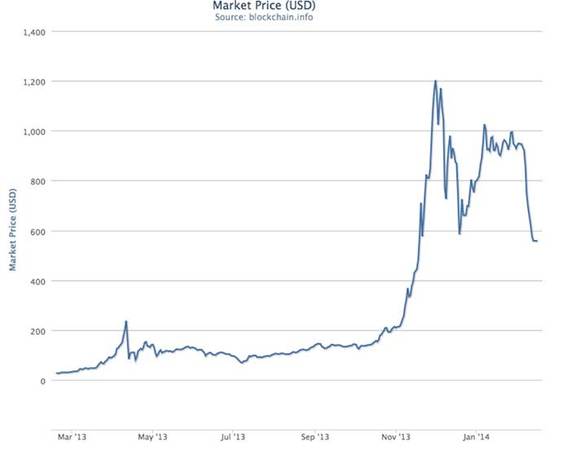 So we can add Bitcoin as another game in the financial casino. But there are many more interesting aspects to this development. Some of the facets that fuel the debate include:

• Anonymity. Some people believe that Bitcoin can be traded with complete anonymity, hence the currency will appeal to black marketeers, drug dealers, terrorists and others with something to hide. But others argue that because the Bitcoin protocol captures every transaction for which the currency is used, it is much more traceable than cash. In fact, Berkman Center's Jonathan Zittrain reports that some think it's a ploy by the U.S. government to capture information about illegal activities.

• Out of Control. Bitcoin is managed by a peer network; it is a currency not under the control of any government. Some argue this means it will be a low-risk global currency, not buffeted by the performance of any national economy.

• Under Control. The definition of Bitcoins establishes for all time the size of the money supply and the rate at which the current supply grows; this is the monetary policy Milton Friedman always urged for the Fed, to maximize certainty of asset holders about inflation.

• Bad for Economic Management. As a consequence, if Bitcoin were to become prevalent, nations would lose the tools of monetary policy as a way to manage their economies.

• Good for the Chinese. If a country wanted to reduce the influence of the U.S. Dollar, supporting cryptocurrencies could help. China, however, has banned Bitcoins, perhaps because the idea of a currency controlled by no one is not acceptable.

• Friction Free. Because the apparatus for "mining" and trading Bitcoins is not part of the existing payment systems and rests on publicly available internet services, advocates see Bitcoin as putting pressure on the fees, often 5 percent -- collected by banks and credit card companies.

I've dealt with Bitcoin above, but there is a much richer set of developments occurring in the world of money. There are many cryptocurrencies out there -- Ripple Labs has created the Ripple Exchange Protocol (RXP) as an open system, and is building not only a currency called Ripple on it but inviting others to find applications. In addition they are developing support businesses, Red Hat to RXP's Linux. And payment systems such as M-Pesa, Vodaphone's mobile-based money network developed in Africa, are another source of innovation; recently M-Pesa started transferring Bitcoin, and one third of Kenyans are reported to have Bitcoin "wallets." And you'll miss the fun if you don't check out Dogecoin, responsible for the tip-bot on Reddit.

I'm working on the agenda for the colloquium. Some questions I think we'll ask include:

• Why have new payment systems arisen? What needs are the existing systems failing to meet?

• How will central banks view currencies existing outside their national monetary systems?

• What is the range of applications for a global, secure, peer-to-peer authentication systems not under the control of any central authority?

• What developments can we anticipate in the next five years?

Please offer your thoughts on these questions. And what others the discussion should cover. Please note that the technology of cryptocurrencies is not the subject here -- it is their impact on the world's economy.

Based on what I've learned so far, I think (1) the payment systems available to consumers and businesses today are a rent-seeking oligopoly, ripe for disruption -- the profits from these businesses will come down, just as music publishers have; (2) there will be a significant political reaction to contain cryptocurrencies, regardless of their anonymity or lack of it -- see Simon Johnson's recent post on this; (3) the idea of peer-to-peer verification over the net is a big idea that will have big consequences sooner or later; and (4) we don't know as much about money and the monetary system as we think we do, and the current institutional framework will be changing, in part because of these developments. The DOJ and Ben Bernanke have already acknowledged that Bitcoin is legal and has some beneficial aspects; and (5) the emerging economies are likely to play a pioneering role in exploring crypto currencies -- South Africa's Standard Bank, South Africa's largest, is testing integration with Bitcoin.

One scenario is that Bitcoin will be the Napster of money -- an approach that perishes in the process of destabilizing the status quo, but leads to massive changes over time.

What do you think? - CAM