Campaigns, independent expenditures and Super PACs will spend millions of dollars this fall trying to persuade voters in congressional elections. However, a number of pundits, experts, and academics have been recently making the argument that swing voters don't matter in midterm elections -- that midterms are all about base mobilization of partisan voters. Is all of the investment in persuasion to come this fall just an enormous waste of money?

This argument is laid out in a concise, thought-provoking article by Professor Lynn Vavreck on The Upshot at The New York Times. I encourage you to read that article before proceeding, but the core of Professor Vavreck's argument is laid out in the following chart -- showing that among Obama voters in 2008, just 6 percent switched parties to vote for a Republican candidate for Congress in 2010 while 28 percent stayed home. Therefore, the real problem for Democrats is mobilizing those who stayed home:

This is an interesting piece of data, but as a campaign pollster, my concern is not the same as Professor Vavreck's. My concern is to give my clients advice about how to allocate their resources between persuading swing voters and mobilizing base voters. A more important question for campaigns, candidates and party committees is: What portion of those 28 percent who stayed home can be activated to vote in a midterm year? The following chart -- one that is not news to anyone who has spent time studying midterm and presidential year voting patterns -- explains that it has been very difficult to change the turnout dynamic between these two different types of elections. Turnout rates in midterm years have stayed within a very narrow band: 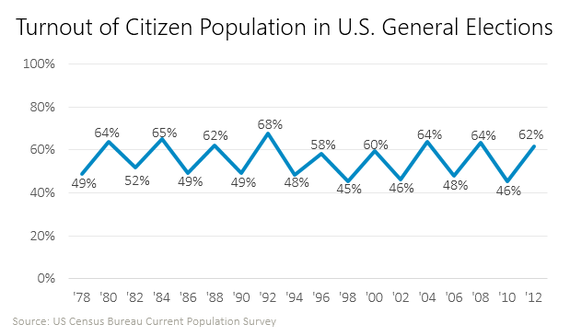 With that in mind, let's revisit the first chart -- this time, adding some information based on a vote history analysis from a national voter file (a big individual-level database that campaign professionals use to tell them who votes and who does not).

We ran an analysis to attempt to learn more about the 28 percent of Obama voters and 17 percent of McCain voters in Professor Vavreck's chart who stayed home in 2010:

This is a simplistic analysis -- campaigns and committees use turnout scoring and persuasion scoring based on a more rigorous series of variables to more precisely define these categories (for more on that, read Sasha Issenberg's latest which goes into these methods in much greater detail) -- but it shows that the decision facing many campaigns is not so cut and dry.

Professor Vavreck is right -- there are very few swing voters and it is hard to persuade them. But there are also not very many mobilization target voters -- and it is hard to activate them. The techniques to get voters to the polls are improving, but it's still hard and it's still just moving turnout rates around at the margins. And as a campaign decides how to allocate its resources, other factors also need to be considered, including the costs and conversion rates of persuasion vs. mobilization in their locale and in their race. In sum, it's not all about swing voters and it's not all about base mobilization -- it's about both.