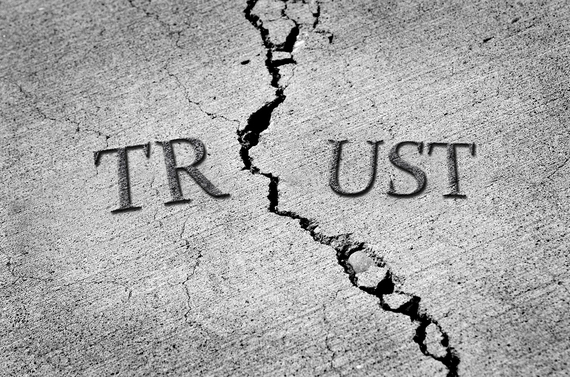 Trust. It's a hefty word, stamped on American currency ("In God We Trust"), integrated into marriage vows, and considered a vital component for both professional and personal relationships. Yet too often trust is on autopilot, given freely unless proven otherwise. In the words of Arthur Ashe, "Trust has to be earned, and should only come after the passage of time." In a world where technology sends us on a galloping chase after social media (the rabbit hole spiral of Bill Cosby's reputation) and round the clock news coverage (CNN's panicked eyeballs on Ebola), we have morphed into consumers who take everything at face value. It's becoming increasingly challenging to put a stop to the noise in order to assess, to ask the right questions, to step back and make informed decisions that will yield the best results. Let's look at some recent examples of how who and what we trust might kill us. What did your chicken eat before you ate it? Was it arsenic? Chicken is a popular staple on American dinner tables, and yet chickens are fed arsenic-based drugs to prevent disease and promote growth. Arsenic is carcinogenic. Recently, the FDA kindly asked Pfizer to please stop manufacturing Roxarsone, so there's hope, you know, that soon our chickens will no longer contain unhealthy levels of arsenic. Just don't have that chicken with white rice. Or apple juice. (Both have also been known to contain arsenic.) What exactly are you supplementing? At GNC, Walmart, Target and Walgreens, four out of five of herbal supplements were found not to contain what the label on the bottle promised they contained. Instead, supplements were filled with things like asparagus, carrots, houseplants, and peas. The New York State Attorney General issued a cease and desist to the retailers, demanding they withdraw their product from the shelves. Trying to improve that memory with gingko biloba or sleep better with valerian root? If nothing else, rest assured you are working diligently toward your goal to eat more vegetables. What sushi did you munchie? Nonprofit marine conservationist group Oceana conducted genetic testing on 1,200 samples of fish from 674 different locations ranging from restaurants to sushi establishments to fish markets in 21 states over two years and discovered that a lot of the fish we eat is mislabeled, sometimes unknowingly and other times deliberately fraudulent. While southern California took the prize for the highest percentage of mislabeling, New York City had the distinction of having mislabeling occurrences at every sushi joint tested. Have you had your mercury levels tested lately? What are those side effects? The Actos lawsuit is helping Americans suffering from bladder cancer as a result of taking the drug Actos, most often prescribed to patients with Type 2 diabetes, seek financial retribution to aid in the cost of their treatment. Symptoms of bladder cancer include chronic urinary tract infections (which you can now get an on-line UTI diagnosis and prescription to treat without a doctor) or bladder inflammation, blood in the urine, difficulty or pain when urinating or unexplained swelling in the lower extremities. On the market since 1999, it wasn't until 2011 after a 10-year study by Kaiser Permanente revealed that individuals who took Actos for more than 12 months had a 40 percent increased risk of bladder cancer and a British Medical Journal study reported an increased risk of bladder cancer by 83 percent, that Takeda Pharmaceuticals changed the label warning to include a mention of the risk for bladder cancer. France and Germany no longer sell the medication, but it is still prescribed by U.S Doctors. Must we now look for subtext in our prescription labels and consider not only what they say, but what they don't say? (And you thought that skill was only necessary in on-line dating.) Who's driving your bus or flying your plane? Maybe you nod your head in greeting to the bus driver when you step on the bus. Maybe you thank your captain when you de-board the plane. These men and women are strangers. We hope that whomever hired them did their due diligence and that they legitimately passed all requirements necessary to hold their position. Furthermore, we hope they take their responsibility for many lives seriously. Flight starring Denzel Washington is not just a movie. That sort of thing has happened, and more than once or twice. (A simple Internet search for "drunk pilot" should do it.) What are those lips servicing? George Bush Sr. famously declared, "Read my lips: no new taxes" at the Republican National Convention in 1988. He couldn't keep that promise and wasn't re-elected for a second term. Politicians will say what they need to say to get you to trust them and cast your vote in their favor, and they will always be more moderate during election time than they will be once elected. As the Mark Twain adage goes, "Actions speak louder than words, but not nearly as often." Since the middle class is disappearing, the likelihood we'll be able to buy only organic, grow all of our own food, or continue to afford our current standard of living shrinks further in the rearview mirror as we sink lower to proletariat status. Our food, drugs, pilots, bus drivers, politicians --- nothing and no one is safe from error, embellishment or concealment. Voltaire said, "With great power comes great responsibility," and he didn't live long enough to meet Jerry Sandusky or witness the birth of the FDA. So buck up, grow a thick skin, stop being a wuss. You were taught map reading skills in the fourth grade, maybe survival skills in cub scouts, and you sweated through standardized testing. Evaluate. Use context clues. Assess and make a personal judgment. (Who said judgment was bad?) If all else fails, trust your mother. Hasn't she earned your trust by now? She wouldn't lie to you.