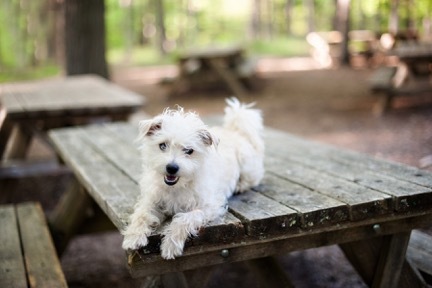 Last week, I posted a piece about reclassifying dogs in America as sentient beings rather than mere property. Many comments blasted my suggestion: treat dogs like children? That's ridiculous.

I openly call my dogs my babies. I think of them as family. Each one of my pets - from the dogs and cats to the birds, rodents and ever-beloved lizard, Vegas - is cared for and treated like an individual in my home.

How do you think of your pets? Do you ever call yourself their Mommy or Daddy?

As my article was getting tossed around the Internet, I considered letting some of the more ridiculous comments go. But when several alerts arrived with links to videos of people beating their defenseless dogs, I felt compelled to make a stand. In one video, a man beat his dog with a studded 2 x 4. I was utterly baffled when he justified the abuse by stating, "It's only a dog." Other videos--not just in America, but in England, too--show dogs with their mouths taped shut, abused by teenagers and lifted and thrown down onto hardwood floors.

Even more disturbing than watching these savage interactions is the fact that most of the dogs will remain with their "rightful" owners, their abusers. How on earth can this be?

It can be because our nation's laws don't protect animals. Even out of the 43 states that have begun to crack down on animal abuse won't convict until the second offense.

Reclassifying dogs and all other beings as "sentient" would simply require us to rethink our relationships in the natural world. I don't think our dogs would want the "exact same rights as children," but providing our nation's furred, feathered and finned friends with their own laws would help protect their needs and punish their offenders.

So what would a change in the law look like? Let's begin with the definition of "sentient being" and how it applies to animals. In a 2008 Journal of Animal Law article, Annamaria Passantino wrote:

"A sentient being is a being that, by virtue of its characteristics, has the capability of experiencing suffering, both at physical and psychological levels, regardless of the species to which it belongs... Sentient animals are beings that have a physical and psychological sensibility, which allows them - in the same way as humans - to experience pain and pleasure. And it is certain that they naturally seek, by all means available to them, to avoid painful experiences."

Does this mean we should all go vegetarian? No, that's not realistic. Should we start dressing dogs or bejewel them when we take them out? No, no, no. One comment on my previous post suggested that I was implying we do away with animal shelters, population control, and considerate end-of-life decisions. I was not.

Reclassifying animals as sentient beings means that we, as a nation, make a mindful decision to be aware of how our reactions affect everything and everyone around us, including ourselves.

Although individual states have laws protecting the rights of animals used in research, our nation's one and only Animal Welfare Act is stuck in the 1960s. It is limited in detail, referencing the treatment and transportation of animals involved in research and retail.

Although a handful of amendments have passed since then, as referenced below, they continue to focus on commerce and research. None address the needs and treatment of animals kept in captivity or living in our homes.

Furthermore, there have been no laws enacted to protect livestock or curb the manipulation of these animals both at a physical and a pharmaceutical level. Science is now warning us of the dangers of certain antibiotic use with food-producing animals. As quoted from the Center for Disease Control and Prevention: "Scientists around the world have provided strong evidence that antibiotic use in food-producing animals can have a negative impact on public health." What we do to our animals doesn't just impact them, it affects us, too.

1970- Deals with experimentation of certain large mammals
1976- Defines transportation and commerce of domesticated animals
1985- The "Improved Standards for Laboratory Animals Act
1990- Shelter and dealer requirements for pet animals
2002- Change of definition of animals to address animal fighting
2007- An Animal Fighting Prohibition Enforcement Act is passed.
2008- The Food, Conservation, and Energy Act is passed, further outlining violations in the training, advertising and holding of animals used for fighting and increasing penalties for those who break the law.

The suggestion that we leave our animals at the mercy of individual judges, who may or may not be considerate of their needs, disturbs me. That isn't good enough.

Reclassifying animals could be just the wake-up call this country needs. It's time to encourage respect for others, regardless of species, race or economic standing.

As Gandhi writes: "The greatness of a nation and its moral progress can be judged by the way its animals are treated." Our country could choose to universally protect the rights of all animals as sentient beings and provide them with the basic emotional and physical comforts natural to each species. The question is: Will we?