Deadly bombings at two Coptic Christian churches in Egypt this weekend have brought attention to a long-persecuted religious minority with ancient roots.

Bombs went off at two Coptic Christian churches in Egypt on Sunday, killing more than 40 people and injuring dozens of others. The attacks occurred on Palm Sunday ― one of the holiest days in the Christian calendar. The Islamic State claimed responsibility for the attacks, and Egyptian President Abdul Fattah al-Sisi declared a three-month state of emergency in response.

The first bombing took place in Tanta, a city roughly 60 miles north of Cairo, during Palm Sunday services at St. George Church. The attack killed at least 27 people and injured some 78 others, the Ministry of Health said. The second bomb went off a few hours later at Saint Mark’s Cathedral in Alexandria, the historic seat of the Coptic Pope. That blast killed 18 civilians and four police officers, and left some 48 others injured.

“Egyptians will mourn this event and they will mean it, but many of them will also fail to recognize the fundamental challenge of religious discrimination that rests as the foundation of Sunday’s violence,” wrote political analyst Timothy E. Kaldas in a CNN op-ed on Sunday. “The widespread perception of Christian Egyptians as lesser citizens with lesser rights creates fertile ground for those who seek to incite violence against them.”

Due to misunderstandings regarding their theology and political allegiances, Coptic Christians have been persecuted for centuries. Here’s what you need to know about this religious minority:

The Coptic Orthodox Church split away from the broader Christian community in 451 A.D. The Coptic Church diverged from other Christians during the 5th century in part due to differing beliefs about the nature of Christ. Coptic Christians believe that Christ had two natures ― one human and one divine ― united as one “without mingling, without confusion, and without alteration.” Catholics and other Christian denominations believe in the incarnation of Jesus, which similarly holds that Christ was both fully human and fully divine. But at the time of the split, Coptic Christians were accused of believing in monophysitism ― the belief that Christ had only one, divine nature.

Coptic Christians trace their founding to the apostle St. Mark. Tradition holds that Mark brought Christianity to Egypt and founded the Coptic church during the first century. It is one of the oldest Christian churches in the Middle East and was the first founded in Africa.

They comprise the largest Christian community in the Middle East. In Egypt, Coptic Christians make up the majority of the country’s roughly 9 million Christians. There are some 12 million members worldwide, according to the World Council of Churches.

Coptic theology and practice have much in common with the Catholic Church ― but diverge in several major areas. Like Catholics, Coptic Christians believe in the Ten Commandments, and they practice the sacraments of baptism, confession and confirmation. But unlike Roman Catholics, they don’t believe in the infallibility of the pope or in purgatory, notes the Associated Press. And Coptic priests can marry.

Copts have their own pope. The head of the Coptic Church is the Pope of Alexandria, a position that is now based in Cairo. The current leader is Pope Tawadros II, a trained pharmacist who studied theology and was ordained a priest and later a bishop. His papacy began in 2012.

The Coptic calendar is slightly different from that of the rest of the Christian world. Copts follow the Julian calendar, and their Christmas falls on January 7. Coptic Christians practice a 40-day period of fasting from red meat, poultry and dairy products leading up to their Christmas. They also observe a 55-day fast preceding Easter.

Coptic Christians have experienced persecution for centuries. Since the time of their split from the rest of the Christian community up through modern times, Coptic Christians have been the targets of violence and aggression. They experienced persecution through shifting power structures in the Middle East, particularly under the Byzantine Empire and after the Arab conquest in the seventh century. There were long periods of peace, too, but these were invariably followed by eras of discrimination and oppression.

Coptic Christians continue to face persecution. Conditions for Copts in Egypt have worsened in recent decades following a series of Middle East wars. Millions of Copts have left Egypt due to rising religious tensions and currently live as expatriates, according to AP. Copts face restrictions on inter-religious marriage and on converting Muslims to Christianity, and activists hold that discrimination also keeps them from attaining positions of high office.

Violent attacks like Sunday’s have become more common in recent years. A bomb targeting an Alexandria church killed over 20 people on New Years’ eve in 2011. It was the first major attack with a high death toll in recent history and remains unsolved to this day, according to AP. In December 2016, an ISIS suicide bomber killed 30 people at Cairo’s Coptic Cathedral. And in February, hundreds of Coptic families fled after a series of ISIS-claimed killings in northern Sinai.

Who Are Egypt's Coptic Christians And What Do They Believe?
Palm Sunday Bombings At 2 Coptic Churches In Egypt 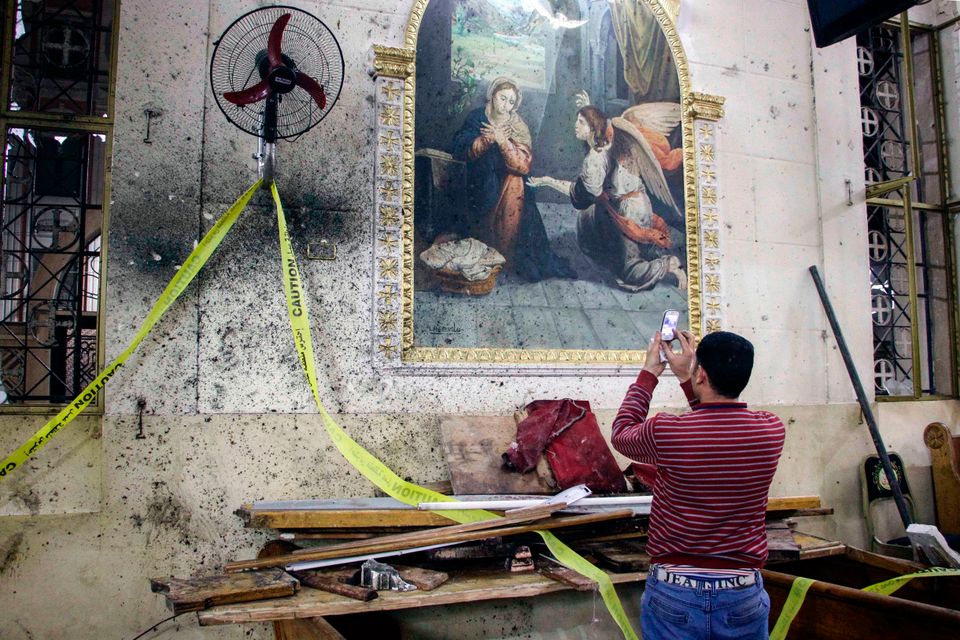 1 / 8
An Egyptian man uses his cell phone to take pictures of the destruction, debris, and bloodstains on the walls and icon murals inside the Mar Girgis Coptic Orthodox Church in the Nile Delta City of Tanta.
STRINGER via Getty Images