The Secrets of the Yazidi Faith.

As it transpired, Baba Chawish was a member of one of three castes that all Yazidis belong to, he was a holy man from the highest sheikh (priest) caste. He led a life of piety and celibacy and had authority over the shrine. He was assisted by the feqrayyat, (celibate 'nuns') who are unmarried or widowed and also care for the sanctuary. The other Yazidi castes consisted of pirs (elders) and murids (disciples), with most Yazidis belonging to the latter caste. Membership in both the sheikh caste and the pir caste is hereditary and is said to often come with special abilities. Each sheikh and pir family, for example, possesses some healing ability and some families are said to be able to cure snake bites, others madness, fever, headache, arthritis, etc. 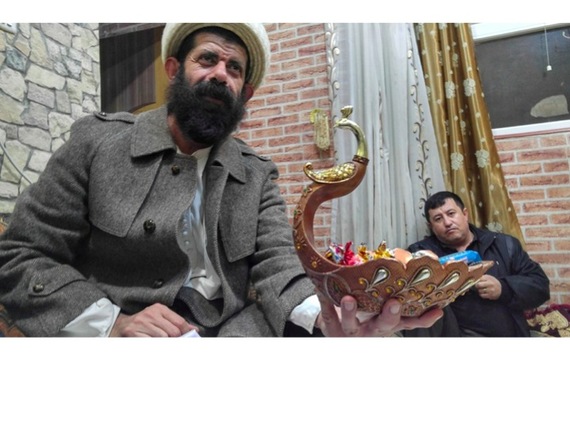 Within the sheikh caste one finds kocheks or "seers" who are blessed with spiritual gifts, such as clairvoyance. The kocheks can psychically diagnose illness and they are even said to know the fate of a soul after it leaves the body of the deceased. There are also kawwals or reciters who specialize in the playing of religious music on sacred instruments, such as the daf (frame-drum) and šebāb (flute), and in the recital of the sacred hymns known as kawals.

At the top of the Yazidi community one finds the Mir (Prince), the temporal ruler of the Yazidis, and the Baba Sheikh (Father Priest), the religious head of the community. Both of these leaders belong to the sheikh caste whose members are descended from the Six Great Angels who assisted Melek Tawus. The sheikhs officiate at circumcisions, weddings, funerals, baptisms and religious festivals. Religious holidays play a key role in the Yazidi faith and several of them have roots traceable to antiquity.

The most important Yazidi festival is the Feast of Seven Days which takes place in the beginning of October. During this festival the seven archangels, including Melek Tawus, are believed to visit the shrine of Lailish. Yazidis attempt to make a pilgrimage to Lailish at this time in order to rekindle friendships, affirm their religious identity and partake in the seven day festival. The two most important events of the Feast of Seven Days are the Evening Dance and the Sacrifice of the Bull. The Evening Dance is performed by sheikhs every evening just after sunset in the courtyard of the temple complex. Fourteen priests dressed in white, the color of purity, parade to the music of kawals (the reciters). They proceed in procession around a sacred torch that represents both the Sun and the Supreme God Khuede.

The Sacrifice of the Bull takes place on the fifth day of the festival. It signifies the arrival of Fall and carries with it the Yazidis' prayers for rain during the coming winter and a bountiful Spring. After guards fire a special gun salute, a small bull is let loose from the main gates of the Sanctuary. The bull is chased by men of the Qaidy tribe up a nearby hill to the sanctuary of Sheikh Shem. There, the bull is caught and subsequently slaughtered. Afterwards, the meat is cooked and distributed among all the pilgrims present at Lalish. The sacrifice of a bull harkens back to the worship of the Iranian sun god Mithras who was worshiped with the sacrifice of a bull.

As for their beliefs, Yazidis do not believe in eternal damnation. Instead they believe in reincarnation or transmigration of souls through a gradual purification cycle. The souls of sinners are reborn as animals for a probationary period before passing into human form again. Ultimately, their souls ascend to heaven. Yazidis do not accept conversion into their faith and those who marry outside of the community are banned. Yazidis are also forbidden from wearing the color blue, eating lettuce, and saying the word Shaytan. In addition to venerating the sun, Yazidis, like Zorastrians, consider fire to be sacred and are not allowed to extinguish it with water or to speak rudely in front of it. They celebrate the new year in April with colored eggs and also have a Feast of Sacrifice, when a sheep is slaughtered by the Baba Sheikh and torches are lit throughout the valley of Lailish.

There are many more aspects of the faith that we did not have time to learn during our visit to the shrine at Lailish, but the window we were given into this secretive religion that has recently opened its doors to outsiders was fascinating. As we said our farewells to the protector of the shrine, Baba Chawish, and left this enchanting place that was the "Mecca" for the estimated 700,000 Yazidis in the world, we had a newfound appreciation for this beautiful belief system that seemed to belong to a different age.

The valley shrine of Lailish had been a place of calming meditation, serenity and contemplation and we were touched by how welcoming and eager to interact with outsiders the Yazidi worshippers had been. In a part of the world where the mindless destruction of pre-Islamic communities and pagan antiquities seems to be the norm, it was a reminder that there are still living remnants of ancient faiths in the Muslim world, such as the dwindling number of Parsi Zoroastrians in Iran, Kalash pagans in Pakistan's mountains, and Yazidis, Mandaens, Shabaks, and Assyrians in Iraq, who face the very real risk of extinction in our time. Having made a life-changing pilgrimage to the holy sanctuary of one of these endangered faiths and seen for ourselves the beauty of this timeless world, we can safely say that the world would be a less colorful place should the ancient Yazidi people disappear from the pages of history as so many other ethnic-religious groups in the region have over the centuries.

Professor Brian Glyn Williams worked for the CIA's Counter Terrorism Center in Afghanistan and is author of The Last Warlord. The Life and Legend of Dostum, the Afghan Warrior who Led U.S. Special Forces to Topple the Taliban Regime. For further photographs from his journeys in the mountains of Kurdistan among the Yazidis and Kurdish peshmerga fighters, see his website here.

Adam Sulkowski is Associate Professor of Law and Sustainability at Babson College, see his website here.

Professor of Islamic History at the University of Massachusetts-Dartmouth, author of The Last Warlord, and Counter Jihad. The American Military Experience in Afghanistan, Iraq and Syria