ISIS Declares a Total Jihad on the Yazidi "Infidels" Like most Iraqis who suffered under Saddam Hussein, the Yazidis celebrated the overthrow of this hated dictator but, like the ancient Christian communities of northern Iraq, they soon became the target of fanatical Sunni jihadist groups such as Al Qaeda in Iraq (AQI) which rose up to fight the Americans. In 2007 AQI targeted the northern Iraqi Yazidi communities of Kathaniya and Jazeera with the deadliest suicide bombing in the world since 9/11. As many as 796 Yazidis were killed and another one thousand five hundred wounded in this massive bombing that involved a fuel tanker and three cars carrying two tons of explosives.

But worse was yet to come. AQI morphed into ISIS and, in August 2014, launched a blitz on the Mount Sinjar region in northwestern Iraq. Mount Sinjar had been protected by the legendary Kurdish Peshmergas (literally "Those who Face Death," a famed fighting force), but these fighters fell back before the ISIS attack leaving this region to the mercy of the fanatical ISIS fighters. As it transpires, Mount Sinjar is the primary geographic focus of the Yazidis who consider it to be a holy mountain (they believe that this mountain, which rises spectacularly out of the flat desert, is the spot where Noah's ark first touched ground after the flood and have seven temples there with eternal flames).

As the ISIS fighters stormed the town of Sinjar, which lies at the foot of the mountain of the same name, they killed as many as 5,000 Yazidis in an act that the U.N. labeled "genocide." One report of this massacre stated that Yazidis were being shot dead and dumped in mass graves and herded into temples that were then blown up. The jihadists also captured hundreds of Yazidi women as sabiya (Quran-legitimized sex slaves) and sold them like chattel in markets to ISIS fighters. These women, many of them young girls, were systematically raped and abused by their ISIS masters and most still remain living in misery as sex slaves for fanatics who legitimize their abuse by labeling them "idolaters" and "infidels" (their plight did not garner as much attention as the kidnapping of schoolgirls by Boko Haram jihadi terrorists in Nigeria). Older women who were not deemed worthy to be sabiya were dragged away and systematically murdered en masse in cold blood.

As many as 50,000 panic-stricken Yazidis fled to Mount Sinjar's bleak, inaccessible heights to escape the ISIS slaughterers. To prevent their genocide, President Obama launched a bombing campaign that halted ISIS's advance and an airlift that provided food and water to the starving Yazidi refugees trapped on the mountain. Kurdish Peshmergas later broke through ISIS lines creating a corridor allowing most, but not all, of the refugees on Mount Sinjar to escape.

But by then it was too late, the heart of the Yazidi population and culture had been obliterated and many distinctive Yazidi shrines, with their conical, fluted towers, were destroyed. Fortunately, in December 2015, Kurdish forces backed up by the U.S. Air Force, defeated the ISIS force occupying the town of Sinjar and some of this scattered community are tentatively returning home. But most have been scattered far and wide from their sacred lands and many have joined in the movement of refugees to Europe. The Yazidis' exile from the ancient shrines of their people threatens to dilute their identity as a distinct people.

This was the background for our visit to the holy shrine of Lailish located to the east of Mount Sinjar safely behind Kurdish Peshmerga lines in northwestern Kurdistan.

A Visit to Yazidi Shrine at Lailish. As our SUV paralleled the nearby ISIS front lines through the mist-covered hills of Iraqi Kurdistan, we peppered our Yazidi guide Thamer with questions on the beliefs and rituals of his people's ancient faith. But he told us to wait until we got to the shrine since he had to show them to us. As we arrived in the narrow valley covered in mulberry trees that cradles the shrine, Thamer told us we had to take off our shoes as the ground we would be walking on was holy. This was the spot where Melek Taus, the Peacock Angel had first de scended to the earth to bring order from chaos. 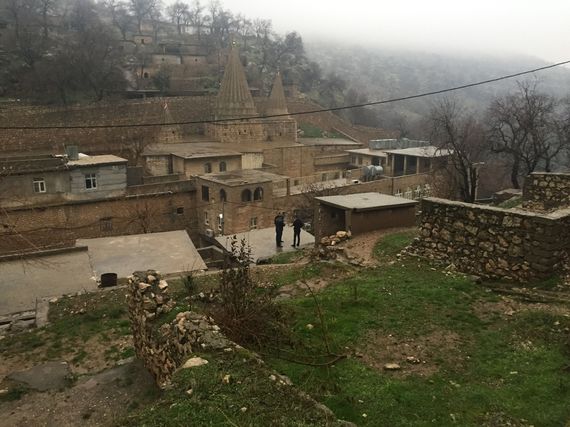 With undisguised excitement (and feet that were numb from the January cold) we entered the outer courtyard of the Lailish complex and approached the main gate. On the stone wall was a talisman of a black snake that was said to have tried leading the Yazidis to abjure their faith and convert to Islam centuries ago. Black snakes, we were told, had magical powers and were not to be killed. We were then asked to reverently kiss the stone sides to the inner shrine's door and step over the sacred threshold without stepping on it. 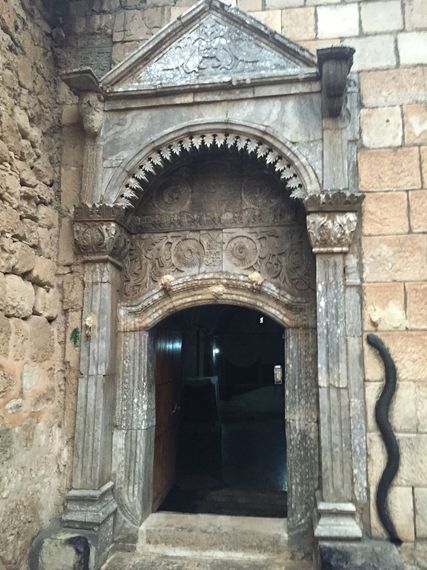 As we entered the ancient complex we noticed a dark pool built into the stone floor on our right. This was the Lake of Azrael, the Angel of Death. Yazidis believe that Azrael washes his sword in this pool after taking a soul. Beyond the pool we found a stone hall of tombs with scarves hanging from it with some Yazidi women tying knots in them. Thamer told us that when you tie a knot and make a wish it comes true when the knot is later untied by another worshiper.

From this hall we passed a stone staircase winding down to a subterranean cave. We could hear the sound of running water from below, but we were told we could not go visit this holy spot, known as the Spring of Zamzam, since it was off limits to non Yazidis. Here Yazidis, who must make a pilgrimage to this spot once in their lives, are baptized. From there we passed through a stone arch and entered the sacred heart of the shrine, the nine hundred year old tomb of Sheikh Adi. Sheikh Adi codified the Yazidis disparate beliefs and is worshipped as a saint and avatar/incarnation of the Peacock Angel. He is also one of the principal judges of men's souls.

From the crypt of Sheikh Adi we passed into a long dark stone chamber where olive oil was stored in ancient clay amphorae. The olives for the oil are picked from the surrounding hills and are pressed in Lalish; the oil is used for religious rituals and for burning in lamps. We were also shown to holes in the stones that were said to represent the entrance to both heaven and hell. 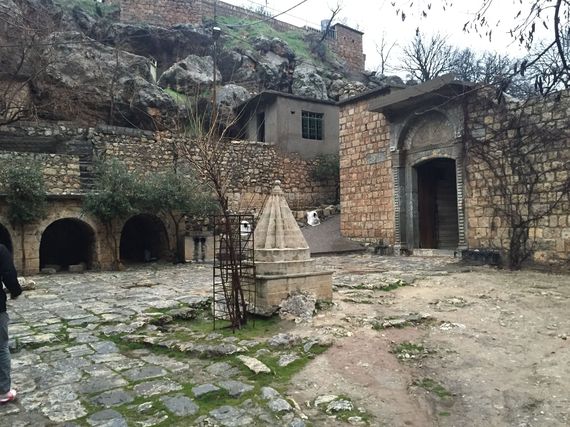 Having toured the subterranean stone catacombs, it was now time to meet their sacred guardian, a eunuch who dedicated his life to the shrine and the second most important priest in the Yazidi faith, Baba Chawish (literally Father Guardian). We entered his chambers reverently and found the white turbaned holy man sitting with several acolytes. He warmly invited us in from the cold to his warm room and offered us sweets from a golden peacock dish.

In the past, meeting with such a figure would have been difficult and the mysteries of the faith would have been kept secret. In fact, most of the Yazidi traditions are passed on orally to keep them secret. But Baba Chawish was a kindly soul who shared with us the inner workings of this ancient faith that has been for so long misunderstood by, and kept hidden from, outsiders.

To Be Continued. Part Three. The Secrets of the Yazidi Faith.

Professor of Islamic History at the University of Massachusetts-Dartmouth, author of The Last Warlord, and Counter Jihad. The American Military Experience in Afghanistan, Iraq and Syria