Either way, we will not win on November 2nd. Sure, party hangers-on hoping for sweetheart contracts and other favors care, and are working overtime using the issues we care about, and fears about what "the other guy" might do to us, to try to make us care who wins as well. But these party operatives have horses in these races that the vast majority of us don't, because when their candidates win, they will go back to screwing us the way they have before the elections.

Take the race for Illinois's open U.S. Senate seat. On the one hand you have a "friend of the people" banker Democrat whose only major accomplishment to date was landing a job at the family bank (no doubt there was rough competition for that gig) and then handing out "loans" to mobsters before the whole thing went bust. He got his current entrée into statewide office largely because he's a fundraiser for and friend of the Obama administration, a repeat of that merit-based hire into the banking vice presidency. His opponent is a political chameleon who will say anything to get into office. 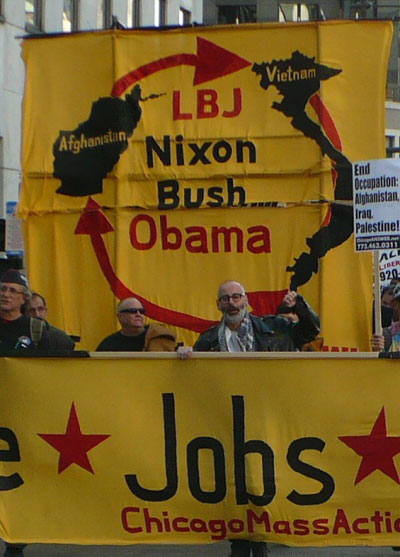 Both candidates are utterly lacking in care about anything that could be described as principles. Power, and the means to augment it, is its own principle. And this is the best that both major parties could come up with for the top of the Illinois ticket? The race not only with statewide, but national implications?

The real question to ask this November is not "Who should I vote for," but rather, "How do we bring about real change," and the voting booth has precious little to do with this.

But that's the last question Democratic operatives want their base to be asking.

Instead they try to scare us. Their main message is one of "my opponent is so so SO bad, you may not like me, but if you don't vote for me, you'll get HIM!" It's blackmail by fear of an even worse "alternative."

But what has happened in the past when oppressed communities and other progressive voters stayed home rather than let this blackmail do its electoral magic? The most dramatic national example unfolded in 1968 with Chicagoans getting front-row seats. An anti-war movement disgusted by the war escalations of Democrat (sound familiar) Lyndon Johnson and the thuggery of the 1968 Democratic Convention gave up on the voting booth. Along with the burgeoning Black Power, Latino and women's movements, they focused their efforts on protesting and resisting established power in the streets of America.

A notorious racist, anti-Semitic, sexist, war-mongering Richard Nixon - "the greater evil" - squeaked into the White House in the 1968 election and tried to carry out his program of escalating the war on Vietnam. As we learned later, he secretly wanted to nuke North Vietnam. But he couldn't, because the power of the international movement against that bipartisan war forced him not to. He then won a landslide reelection in 1972 (the biggest Presidential landslide in history up until that time), and yet still, he and his successor were forced to pull out of Vietnam.

Many other important gains were won during the Nixon presidency that make him look far more liberal than any president since - food stamps, affirmative action, the Environmental Protection Agency, a Nixon-packed Supreme Court legalizing abortion, to name a few. All because there was a movement in the streets forcing these changes.

Today, President Obama is looking very similar to Lyndon Johnson, but without the civil rights and Great Society legislation. Obama promised to repeal NAFTA and make it easier to join unions ("card check"), but instead we got the bank and other corporate bailouts - the largest transfer of wealth from working people to rich people in world history. And a jobless recovery, no foreclosure relief worthy of the name, and a freeze on domestic spending (but not military spending) -- all while he surrounded himself with the Goldman Sachs alums and other corporate cretins who gave us the financial meltdown in the first place.

Obama promised to stop the Bushite attacks on civil liberties, close Guantanamo and amend if not repeal the USA PATRIOT Act. Instead he has launched FBI raids on anti-war activists, assassinations abroad, subjected a 15-year-old Guantanamo detainee to a military tribunal, and aggressively campaigned to expand executive spying power with no judicial oversight.

The Obama "peace" alternative to George Bush and John McCain continues the American occupation of Iraq, with mercenaries upholding a hapless "government" instead of troops. With record military spending he has dramatically escalated the Afghanistan war, with Special Forces and drones in Pakistan, Yemen and Somalia. He's supported a brutal coup in Honduras, is building threatening new U.S. military bases in Colombia, and lets Israel commit war crimes against the Palestinians and those seeking to aid them.

Whether the issue is gay rights (hanging with bigots like Rev. Rick Warren, arguing in court to uphold Don't Ask, Don't Tell, etc.), immigrant rights (greatly increased deportations, no reform while his party had solid majorities in Congress), or the environment ("drill baby drill" on the Atlantic seaboard, oops, until the BP disaster), President Obama has been the George W. Bush "third term" we were warned we would get with McCain/Palin.

In a few days time Obama and the Democrats are going to get the thrashing they richly deserve, and I for one will have no pity for them. And there will be no Ralph Nader scapegoat this time (not that the Greens deserved it the first time).

Instead of staying home in disgust, I hope that people around the country vote Green Party and for other third party progressive candidates regardless of whether it throws the elections to the Republicans or not. The Dems continuing as the dominant party in power will only give us nicer rhetoric, while escalating the retrograde policies of the previous administration, as they have during the two years they've had the control of the presidency and Congress.

I am not Pollyannaish about the Left's prospects for the next few years. The most critical lesson our current generation still needs to learn is that however difficult they are to construct, only movements independent of both major parties can win the changes that most of us want.

The power of the early Civil Rights Movement of the 1960s, spiking to an incredible height of effectiveness in the 1963 March on Washington and the flood of civil rights legislation which followed it, was not in its inspiring rhetoric, but its determined independence from both parties. Civil rights principles trumped parties.

Only a progressive movement completely independent of, and opposed to the Democratic Party and its operatives, can begin to emulate that marvelous legacy.