A lot can happen in 15 years: You attend college. You get a new job. You rent your first apartment. You get married, start a family, buy a house. For Jossalyn, little has happened. She has spent the past 15 years homeless.

Like many others I meet on the streets, Jossalyn has fallen through the gaps in the safety net. She is surviving now, but how long will it be before Jossalyn becomes critically vulnerable?

I'm reminded of a question Nancy Lublin and her daughter asked me repeatedly on a recent tour of Skid Row. Besides 911, who can people call when they see a homeless person needing help? And there are people in dire need of homeless services everywhere. 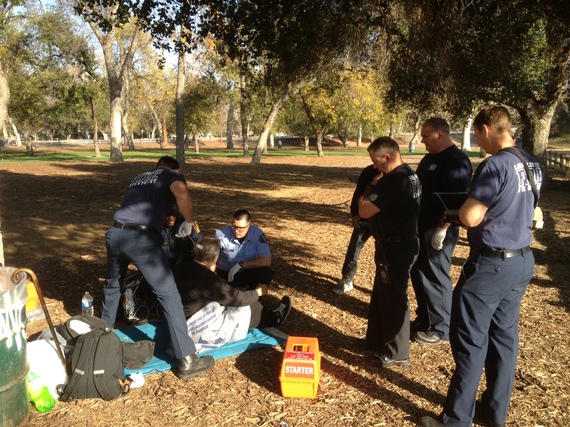 An elderly gentleman lies on a park bench with a head injury. You ask if he is alright; he slurs that he is fine and waves you on. It becomes clear that he is intoxicated, most likely homeless and in need of medical help.

In another city, a man asks if you can spare some money. You notice he has severe, deep sores on his arms that require medical attention.

Using cardboard as flooring, a woman sits on a city street. You can clearly see a large tumor growing on her abdomen as she struggles. She needs urgent help.

These are actual people suffering in cities across the country. Any decent person wants to call a professional to help. But who do you call?

Some municipalities have homeless response teams providing outreach to those in need. In Philadelphia, for example, the city partners with Project Home offering a 24-Hour Homeless Outreach Hotline and an emergency response team will be dispatched.

In Pittsburgh, one can call Jim Withers, a doctor that goes out on the streets to help homeless people.

The Boston Health Care for the Homeless Program is another amazing service. Of course, Massachusetts has healthcare funding for chronic homeless.

In LA, they have started C3 teams in different areas of the city that have mental health, nurses, housing and other stakeholders going out on the streets together. This is a huge step in the right direction, but services still need to be expanded significantly.

In other cities, emergency response numbers are provided for people to call. But the cities lack resources to send an outreach team to help. You can call the number, but no help will be provided.  Not to mention an outreach worker is powerless without support services to plug people into.

Most cities don't offer emergency response at all. There is simply not enough money to provide needed support for homeless people in cities big and small. More funding is needed for homeless services.

Existing services also need to be extended. Many homeless services only operate from 9a to 5p Monday through Friday. However, the majority of homeless crises happen at night.

I support the shift over the last few years of targeting the most vulnerable with the limited resources available. But if we are ever going to truly end homelessness, we need to figure out how to get everyone off the streets.

The longer a person remains homeless, the more vulnerable they become. This leads to a greater need, which far outweighs the resources.

I have been in a few conversations trying to find a solution for Jossalyn.

While she receives general relief (welfare), which is not enough to pay any rent, she most likely does not qualify for supportive housing. Rapid Rehousing funds, if available, are only temporary. And, the theory behind Radpid Rehousing programs is a person will be able to support themselves in a given amount of time.

Jossalyn is smart and articulate; she is not on drugs, she is not disabled or on SSI, nor does she have a visible mental illness. She does have a felony on her record and therefore has run into obstacles trying to get a job. In addition, she is a senior and she is black. She has also lived in the streets far too long.

I believe she'd be a great worker after a little time and healing, but who is going to hire her with a wage that she can support herself?

In every community, we need an emergency response for people to call when they see a homeless person who needs help. We also need better programs for people like Jossalyn to get everyone off the streets before they become vulnerable. Nationwide, we need real solutions to homelessness, not more shelter programs. We need housing and support services.

Funding is the issue. Support for homeless services must be a priority.