In the quest to catch virtual pocket monsters, hundreds of millions of people may be inadvertently breaking the law.

That's the conclusion of Alabama-based attorney Keith Lee. In a thought-provoking piece, he questions the legality of Pokémon GO by detailing all the ways that the new blockbuster mobile game may be encouraging its users to trespass and put themselves in harms way. Based on the beloved, decades-old cartoons and playing cards, the app works by allowing people to explore their actual surroundings to find and collect animated characters that appear on their screen. Strangers are spontaneously coming together in roving groups of hundreds and thousands, to do just that. And its raising some startling new questions about property rights.

At the heart of the matter is the issue of whether, as Lee puts it, our "exclusive rights to property also extend to cyberspace."

A core maxim at the root of modern property law is that 'whoever owns the soil holds title all the way up to the heavens and down to the depths of hell.' What is unclear is how this principle translates into virtual space. The speed and scale with which Pokémon GO has spread is bringing these long-standing issues to the forefront in a dramatic way.

Reports are coming in from around the globe of problems in the unlikeliest of places. Sensitive historical locations are becoming "Pokéstops" - points of interest marked in the game - and there are even reports of private properties labeled as "Gyms" - designated areas where players physically come together to battle their virtual creatures. Etiquette and behavior have a long way to go. Police departments, driving safety agencies, and cemeteries are having to warn users to play thoughtfully. Even authorities at the Auschwitz Memorial in Poland have had to take the unusual step of asking visitors not to catch Pokémon there.

For some, the problems are more personal. Designer Boon Sheridan woke up to find dozens of strangers outside of his home. It was once a former church; now, it's the neighborhood's "gym." This led him to question the ethics of what Niantic Labs and Nintendo had done, pondering whether he had any rights to "having a virtual location imposed" on him and whether "having a gym layered" on his house would impact his property's value.

While he joined in on the fun, there are many instances where such situations can lead to danger. Sheridan, nor anyone else, was ever notified that their property would become part of a massive, immersive game. The app's makers seem to have underestimated the real-life impacts of their creation. Niantic Labs does have a link buried deep on their website where one can request a change to the placement of a location in the game, but the onus is on the party affected to speak up. (The company did not respond to a request for more information about their redressal process and what sources their map draws information from).

Pokémon GO is the most widespread deployment of augmented reality technology, which works by superimposing a visual layer of information on top of the real-world, that we have seen to date. Whether this is a passing fad, questions about moderation, complaints, and liability in new computing platforms will continue. In many ways they are the extension of the same free speech and reputation issues we struggle with today. Any small business owner can tell you how a bad Yelp review or unappealing photo on Facebook can already "augment" their prospects in real life - and just how vital it is for to them to have a way to dispute incorrect information.

It's important to note that the problematic features are what make the game so fun and appealing in the first place. It's a unique experience to explore the world around you through a new lens. There's an aura of mystery to a map full of source-less detailed information about your neighborhood. It's the peculiar social nature of the game that creates positive and vibrant connections between people. Stopping the game -- or forcing changes to the way it's played -- is not the solution. Instead, what's needed is another information layer: a robust issue tracking, notification, and complaint management infrastructure to make sure that the physical and virtual can exist together in harmony.

This article originally appeared on Forbes - Disruption and Democracy. 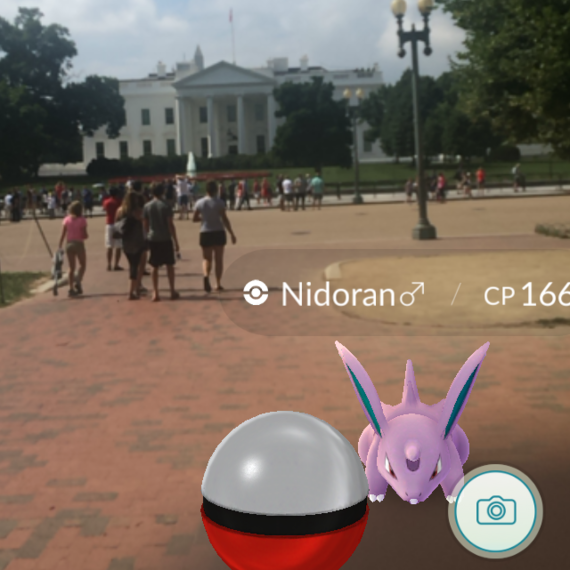 (Credit: Priya Bapat) The White House serves as a "gym" for Pokémon GO players to gather - at least, until Secret Service decides otherwise.