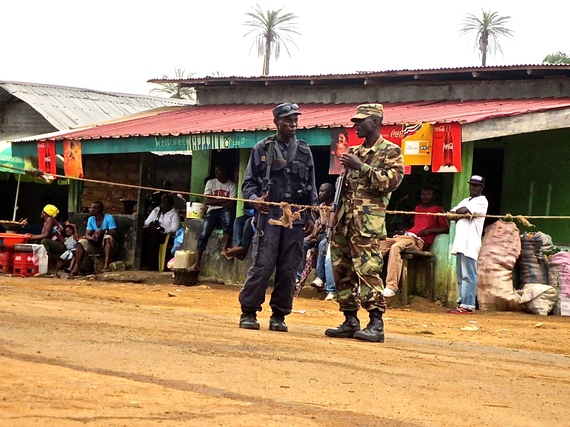 Let's be clear -- the police are not the same entity as the military. The situation in Ferguson, MO in the United States has demonstrated that very fact, as the National Guard, was called in on August 18. The same holds true in Liberia -- the Liberian National Police (LNP) are not the same entity as the Armed Forces of Liberia (AFL). The distinction between the two entities is an important one, but one that the media has ignored. Treating the two entities the same could lead to further mistrust in the government.

Currently, there is a distinction between the roles of the AFL and the LNP in handling the civil unrest due to the Ebola outbreak. The State of National Emergency declared by President Ellen Johnson Sirleaf requires the AFL to be deployed to enforce it. The job of the AFL has, thus, been to enforce the quarantines, checkpoints, curfew, and everything else declared in the National State of Emergency. They are, however, supposed to serve as a deterrent and only engage when the police cannot handle the situation. The job of the LNP has not changed -- to ensure law and order. Nevertheless, the LNP have created a special task force of around 500 officers called the Ebola Response Team, which is also tasked to help protect burial teams, respond to Ebola incidents, and help quarantine sites and man checkpoints. The distinction between the two entities may be fuzzy because they are working together. But, this does not mean that they can be treated as the same entity. It would be like calling the National Guard and the Ferguson Police Department the same entity. It is simply inaccurate.

Liberia's security response to the events in West Point this past week made international headlines. Over the weekend, West Point residents stormed a treatment center for Ebola victims and the patients escaped, while the entire facility was looted. In response, the government quarantined the community on Wednesday, sparking riots and violence. Various media outlets reported that shots had been fired, injuring residents. All of this is accurate information according to sources on the ground, but some of the details of this reporting may be inaccurate.

In a country like Liberia, it matters who fires live rounds. It matters who uses less lethal means to control crowds. It matters who is present when things go awry. The reputation of an entire institution is at stake. Because, in Liberia, where mistrust of the government runs deep, incidents can be used to fuel the flame for future violence.

One Reuters article headlines states, "Liberia police fire on protesters as West Africa's Ebola toll hits 1,350," but the article then goes on to suggest that it was actually the AFL that fired the shots. Different media outlets such as Fox, Aljazeera, BBC, and others picked up the story and ran the same headline. Additionally, most of the pictures (picture nine refers to the police, but it is a picture of an AFL soldier) in West Point are of the LNP or have captions that are misleading. As a result, even without reading the article or by looking at the pictures, the assumption is that the LNP fired shots and may have injured residents. But did they actually fire the shots?

Reports on the ground (and from the institutions themselves) have suggested that it was actually the AFL that fired live rounds and that the LNP used less lethal means, such as tear gas, to quell the crowd. In short, the LNP could not handle the crowd in West Point and the AFL entered to help quell the situation. To contain the situation, the AFL became actively involved by firing shots that may have injured some residents. Further evidence for why it is likely that the AFL fired the rounds is because the AFL were not carrying less lethal munitions (except for batons), which means that the only means of engagement for the AFL was to use their weapons. In contrast, despite the pictures of armed LNP officers, the LNP had deployed units specialized in less lethal munitions and tactics.

What actually happened in West Point matters. It matters for future security and future trust in the government. Mistrust of the government has been one of the major reasons why the epidemic has been so hard to control. If shots were fired and people were injured, the right institution should be identified. Mistakes about accusing the wrong entity could lead to further anger and violence directed toward that entity and it only serves to create more mistrust toward a security sector that is already highly mistrusted. The international media should make sure that the details in their story are accurate so as not to create further distrust.