Who Grows Our Food is an occasional Meatless Monday series taking a close look at some of the people, so often unsung, who give us the food on our plates.

"Sustainability isn't a thing, it's a way of thinking," says Ed Flanagan. "When you're a company, you have to adopt it as a mission. A consumer can encourage it by doing things," from recycling to growing plants encouraging biodiversity. Flanagan's not your basic treehugging environmentalist (not that that's a bad thing). He's also president and CEO of Wyman's of Maine.

Wyman's began as a family business back in 1874 and has grown to be one of the nation's largest producer of wild blueberries. Balancing a family business ethos, environmental responsibility and company profitability has been Flanagan's job with Wyman's for over 20 years, but as he explains, "We don't speak in years, we speak in harvests. I'm coming up on my twenty-first harvest." Right now, in fact. It's harvest time. "I was out in some of the fields this morning." 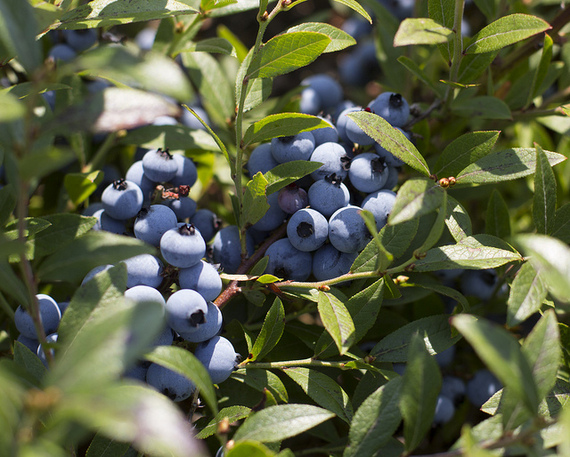 Unlike cultivated blueberries grown from Florida to New Jersey, wild blueberries "are a root system indigenous to Maine, the Maritimes and parts of Quebec. We've never planted them," Flanagan says. "They're more like a mineral resource than a crop -- it's either there or it's not. " The berries have been thriving for centuries, long before Wyman's began. Beloved for its bright flavor and high antioxidant content, the wild blueberry "is a pretty tough little fruit," says Flanagan. "It's learned to survive low to the ground in a cold, wet climate." But it's facing a threat.

Remember, wild blueberries aren't planted. They rely on honeybees for pollination. Honeybees are vanishing. Without them, wild blueberries, along with a third of the food we eat, may go the same way. As Flanagan says, "No bees, no berries."

Flanagan likes to be out in the fields during blueberry harvest, but his background is sales, not farming. So when he can notice the changes in the bee population, "it's pretty obvious. The hives are not as vigorous as they used to be. I don't know why everybody else isn't as scared as I am," he says. "Not many of my peers have recognized the urgency we have or they think others are working on it. Everybody should be contributing to this problem. Hey, come on, what if we can't feed ourselves?"

He recalls when one of Wyman's own beekeepers, Dave Hackenberg, first noticed the syndrome called Colony Collapse Disorder (CCD) back in 2006. "Davie's a fastidious beekeeper, and if he was scared, I should be scared." Wyman's has never used the toxic neonicotinoides linked to CCD and other environmental calamities, but Flanagan thinks that's only one contributing factor. "It's a complicated matter the way the human is complicated. No one yet has solved it."

Wyman's is funding honeybee preservation studies at Pennsylvania State University and the University of Maine and sponsors The Pollinator Partnership, a nonprofit dedicated to pollinator health and research. Flanagan himself has urged Congress to fund CCD research, was keynote speaker at Smithsonian's 2010 Pollinator Conference, and in April, attended a White House sustainability summit along with companies including Toyota. In the grand scheme of things, it's all good, but the fate of our food supply rests on something very small.

"If there aren't any more honeybees, you'll still be able to buy a Toyota. You won't be able to buy blueberries," he says."You have to be a steward of the environment. Who's going to do it if you don't?" 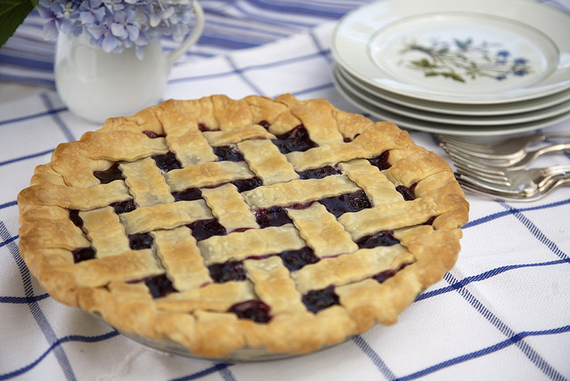 Lightly oil a 9" pie pan. Combine sugar and flour in a small bowl. Set aside.

Stack phyllo sheets and cut them in half crosswise. Cover with a slightly damp cloth and set aside.

Take one sheet and gently layer it on the bottom of the pie pan. Brush lightly with the oil and sprinkle with 1/2 teaspoon of the sugar mixture.

Repeat with all but one remaining sheet, layering clockwise at 1" intervals until the entire pie pan rim is covered. Trim excess phyllo with kitchen sheers.

Cook over medium heat, stirring gently, until mixture comes to a boil. Cook and stir 2 additional minutes. Remove from heat and pour into prepared phyllo crust.

Cut remaining phyllo sheet in half crosswise. Lightly brush each half with oil. Stack the layers and fold lengthwise. Cut into 6 strips. Twist the strips and arrange them over the pie filling, 3 horizontal and 3 vertical strips.

Bake 20 to 25 minutes, or until phyllo is golden. Cool and serve at room temperature.