My aunt will never forget that day in 1975, when her 20 month old daughter woke up from a nap, crying petulantly. The child seemed to be having difficulties supporting her body and couldn't walk. The following day, the left side of her sweet little face had become strangely contorted, and she was completely unable to move her left arm or leg. Terrified, her mother took her to the hospital where the family spent the next five weeks in agony and fear until doctors finally discovered what ailed the child. Little Kristín had mumps, which in the 1960s before vaccination was available (in Iceland not until 1989), infected millions of children every year. The virus usually causes a chipmunk face and fever, but occasionally it penetrates the brain and spinal cord linings, causing seizures, meningitis, paralysis, and in some cases, death.

In Kristín's case, the mumps virus had infected her brain, leaving the left side of her body paralyzed.

The agony caused by mumps, measles, polio and other diseases that science had, until recently, largely succeeded in eradicating with vaccines is unimaginable only because we haven't had to know these diseases existed. But thanks to anti-vaccine zealots like Jenny McCarthy, we will sooner than later become familiar with the horrors of viruses that spread faster and surer than even lies and propaganda. 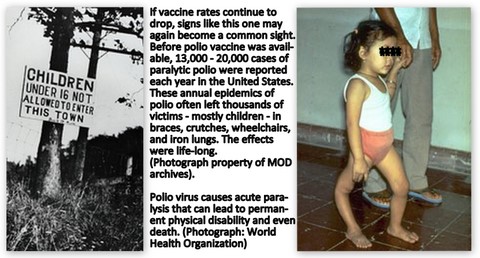 Measles have now become endemic in the UK as a result of the decline in vaccine coverage, 14 years after the disease had practically vanished. In Dublin in 1999, the year after Andrew Wakefield's "trial-lawyer funded, an incompetent, and quite likely scientifically fraudulent 1998 Lancet paper," more than 100 children were hospitalized with measles. Three of them died. In 2006, rates of whooping cough - a highly contagious, and for babies and young children, potentially fatal, bacterial infection of the respiratory system - were almost 90 percent higher in US states where parents can exempt their children from vaccinations for personal beliefs than in states that allow exemptions only for medical or religious reasons. In 2008, five Minnesota children became ill after an outbreak of the bacterial infection H. influenza type b (Hib, Haemophilus influenzae type b, a bacterium that causes meningitis and other serious diseases. Hib vaccine became available in 1990; before that Hib infections resulted in about a thousand deaths every year) three of these -- including one who died -- were infants whose parents had refused to vaccinate them. All these diseases will come back in greater numbers with mounting casualties as more parents choose not to vaccinate their children.

McCarthy doesn't seem to care about the plight of children like Kristín and that of thousands of other children who will face illness and death because their parents bought into outrageous anti-vaccine lies and fear mongering. She has said as much: "It's going to take some diseases coming back." (As if she were talking about dandruff.) But parents should care. They should at least try to envision the reality of parenting a severely handicapped child -- or even not parenting at all, in the very real cases of death -- before accepting McCarthy's logic, which is a snakepit of neurotic aberrations, conspiracy theories, childish outbursts ("that's a lie and we're sick of it"), profanities ("it's their [vaccine companies] fucking fault"; "bullshit"; "it's [vaccine] a shit product"), and outright lies: "our own government clearly acknowledges that vaccines cause brain damages in certain vulnerable kids", which it does not at all. Neither the government nor the courts have "acknowledged" that vaccines cause brain damage or autism. The government has conceded that in specific cases, vaccines may have been responsible for exacerbating a condition with symptoms that are similar to those of many autistic disorders.

The courts agree. The Vaccine Court (The Office of Special Masters of the U.S. Court of Federal Claims) has rejected any relationship between autism and vaccines. In the Poling case, which is listed on the Gen. Rescue's page of "court cases" the child had an underlying condition, mitochondrial enzyme deficiency, which consisted of a metabolic disorder called encephalopathy.

McCarthy claims that "other countries give their kids one-third as many shots as we do," but a comparison of European and US vaccination schedules reveal that they are largely identical; with some countries even out-vaccining the evil USA.

She writes "There is something wrong with this generation of kids. They aren't healthy." Speak for your own offspring, but studies (in which she of course is not interested) indicate that probably no generation of children in the world's history has enjoyed greater health than the current one. Life expectancy for newborns in the US has increased from 57.1% for babies born in 1929 to 77.8% for babies born in 2004. During the period between 1990 and 2004, childhood cancer death rates fell sharply among both sexes, all ethnic groups (except American Indians) and in every census region of the country.

What primarily threatens this generation of children in terms of health risks - in addition to anti-vaccine crusaders' lies and willful ignorance - is obesity, inactivity and resultant diseases, the fight against which would be a truly worthy cause for McCarthy to transfer her enthusiasm, although given her allergy to the truth, one is hesitant to recommend any such moves.

In true quack fashion of fabricating controversy, McCarthy talks about "the hundreds of doctors who specialize in autism recovery," having thus, according to her, accepted "the loss of mainstream status in their field." Apparently having instead gained pariah status, they also "know better" than to "speak to the press." What on earth is she talking about? As a parent of two children with ASD, I have met many, many doctors; not one of them has ever maintained that autism is a "hopeless condition," let alone "made a career" out of propagating such statements. On the contrary, every single doctor I have met for my children's condition has given useful advice and referred me to countless beneficial resources that have been of great help and benefit to my kids. Of course, I don't seek out the services of quacks, which may very well be the "doctors" McCarthy is talking about. But we all know who in this debate has made a career out of spreading misinformation about autism, and it is not the "diagnosticians and pediatricians."

Who is afraid of the truth about autism? Who indeed? Could it be the denialists in the anti-vaccine movement and people like McCarthy, who've made a career out of promoting misinformation and half-truths?

I'll venture that McCarthy has no less a financial stake in the vaccine wars than Big Pharma and the evil "diagnosticians and pediatricians." There is a lot of money to be made in snake oil pitching and crockpottery -- long known lucrative side industries for aging celebrities -- as she knows from personal experience selling books and the false cures on her website where her sponsors peddle hyperbaric chambers and useless supplements -- in the US, a $24 billion industry annually -- to desperate parents of autistic children. When you have a whole industry -- books, TV appearances, supplements, merchandise -- and the adulation of religiously devoted followers riding on your theory, the stakes are high. Having to admit you're wrong is intolerable. (How's McCarthy's "quantum prayer wheel" working for your kid's autism?) It is much easier to simply reject the truth, which as we know, the vaccine denialists don't care about; it is irrelevant to them. Their attitude is that of Lord Molson: "I will look at any additional evidence to confirm the opinion to which I have already come."

At least parents can take comfort in the knowledge that McCarthy and her fellow denialists have financial resources that can be targeted in damage suits before the courts. This will be relevant for families of unvaccinated kids brain-damaged and paralyzed for life because their parents bought into the anti-vaccine movement's fear mongering.

My cousin was fortunate. With extraordinary effort and determination and support of resolute parents fortunate enough to have adequate time and resources to devote to their child's rehabilitation, Kristín was able to regain some of the movement in her limbs. At an early age she turned her rehabilitative swimming into a career that has earned her and her country multiple golds in the Paralympics Games.

Kristín is now pregnant with her first child. She is ecstatic, but also a little anxious; because of the pregnancy, she is unable to take her medication for seizures, another legacy of the mumps virus. "We'll just have to hope for the best," she says. When the time comes, she, of course, has no doubts about having her own baby vaccinated. "That's a no-brainer. Of course! Absolutely."

Looking back, her mother says she cannot understand why parents would knowingly expose their children to the unnecessary risks of a multitude of dangerous, wholly preventable diseases: "I just wish the vaccine had been available back then."■

About the authors:
● Icelandic journalist and writer Íris Erlingsdóttir, MTOM (Master of Traditional Oriental Medicine), is the mother of two children with ASD (Autism Spectrum Disorder).
● Svanur Sigurbjörnsson, MD, received his certification from the American Board of Internal Medicine in 2001. He is an attending physician at Iceland University Hospital, Emergency Department in Reykjavik and at Mosfellsbaer Health Care Center. He can be contacted at svanurmd@gmail.com.