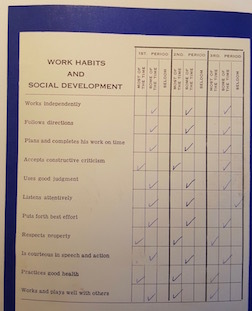 Many of the 2016 Republican presidential candidates and their supporters would not do so well on behavior section of my 1950s report card that included items, such as: Works and plays well with others; Listens Attentively; and Accepts Constructive Criticism. Scores ranged from seldom to always. Certainly, no one would be proud to claim a seldom on any of these commonly accepted positive character traits. However, the behavior and votes of too many of our fellow citizens suggest otherwise. We are at a historic inflection point. On the one hand, ascendant racism, misogyny, xenophobia, and anti-intellectualism harkens back to darker times. On the other, addressing inequity is at the center of the current election cycle. We elected an African-American president twice and the Democratic candidates are a woman and a Democratic-Socialist Jew. These development point towards a more progressive direction.

I continue to believe that schools that teach respect for others and for evidence can be a positive influence.

For parents, educators, and policy makers the pertinent questions are:

Education policies and practices can help in at least three ways: Promote structured social and emotional learning (SEL); Incentivize diverse, integrated classrooms, schools, and neighborhoods; Prioritize science and engineering instruction for all student that focuses on reasoning and arguing from evidence.

First, some good news: A growing number of schools provide opportunities to address these behavioral characteristics in structured social and emotional learning (SEL) programs. SEL competencies include self-awareness, self-management, social awareness, relationship skills, and responsible decision-making. Research suggests that time spent on explicit attention to these talents pays off. A 2011 Meta-Analysis on the impact of SEL programs found that SEL programs improved academic performance while also reducing aggression and emotional distress among students, increased helping behaviors in school, and improved positive attitudes toward self and others (Durlak et al., 2011).

The research on the benefits of diversity is compelling in both education and the workplace.

Students who attend racially and socioeconomically diverse schools are more likely to achieve higher test scores, better grades and graduation rates, and establish cross-racial trust and friendships. Importantly, there is no evidence that integrated schooling harms any student group. In addition, there are long-term benefits for adults who help build civic capacity in communities. These outcomes are essential building blocks of social cohesion, a quality increasingly vital to a vigorous, just, multiethnic, democratic society (Mickelson, 2015).

Scott Page, a University of Michigan researcher on complex systems, makes a powerful case that "diversity matters not just because it is the right thing to do. Diversity matters because it can increase [organizational effectiveness] by introducing more perspectives, heuristics, interpretations, and predictive models. These diverse cognitive tools can, in turn, improve an organization's ability to solve problems and make accurate predictions" (2007).

Collaboration is the means by which the benefits of diversity are realized in work, life, and citizenship. Politically, we appear to be in an era of celebration of individual wealth accumulation and personalized learning. But, it is collaboration that is prized by employers and facilitates sound decision-making ability. A 2013 article in Forbes Magazine summed it up well, "Are you able to work effectively in a team? That's the skill employers most want when they are recruiting new college grads. The next most important skill: ability to make decisions and solve problems." A recent study by Zhang and colleagues (2015) showed that when students actively consider evidence and multiple perspectives about socio-scientific issues in collaborative groups they are better decision-makers than students who receive more teacher-directed instruction. The former were more likely to consider more sides of a dilemma, use more comprehensive reasoning, and better weigh the importance of reasons in a novel situation.

Third, some promising news: New developments in science education research and standards offer hope in each of the three report card domains. The Framework for K-12 Science Education (2012) and the Next Generation Science Standards (2013) represent a research and practitioner consensus about what is important for the science and engineering education for all students. These documents present a strong case that engaging students in and learning how to use the practices of scientists and engineers to build new knowledge and solve problems is essential for 21st-century workplaces and informed democratic participation as citizens. Importantly, these practices include evidence-based argumentation (Osborne, 2016). Simply put, this means that a proposed model of how the natural world works or an engineering solution to a problem should be defendable by evidence and subject to critique and revision in the larger community. In this view, the essential intellectual and social activities of understanding and improving the world in which we live are collaborative, community endeavors that are enriched and improved by consideration and evaluation of multiple perspectives. Significantly, these practices and dispositions can be learned and practiced.

We do not yet have substantial evidence that the combination of SEL, diverse integrated schools, and evidence-based argumentation in science classrooms will develop socially responsible adults who are less prone to act and vote on their biases. However, it offers hope, which is in short supply.

Besides, it would be terrific for that old report card and even better for humanity!

Rotberg, I. C. (2014). Charter Schools and the Risk of Increased Segregation: Charter Schools, on Average, Don't Have an Academic Advantage over Traditional Public Schools, but They Do Have a Significant Risk of Leading to More Segregation. Phi Delta Kappan, 95(5), 26.