Entrepreneur, author and motivational speaker, Jim Rohn, once said, "You are the average of the five people you spend the most time with."

I invite you to pause for a moment to absorb the significance of Jim Rohn's statement.

Next, think about the five people with whom you spend most of your time.

If you combine the annual income of those five people and divide it by five, chances are this is approximately the same amount of income that you earn.

Those of us who've studied the art and science of transformation, including Jim Rohn, understand that it's extremely important to surround yourself with positive influences when you are pursuing your dreams.

The people with whom you surround yourself greatly influence your success... and not just financially, but in every area of your life!

The Law of Averages says that, as I'm being influenced by certain thought patterns and beliefs about life and possibilities, I begin to believe those same beliefs and experience those same kinds of results.

Your ability to create a life that you truly love living is profoundly affected by who you allow to have access to your mindset, your thinking, and your attitude.

Highly successful people seek to spend as much time as possible with positive thinking, success-minded people, who are not only seeking to become the best versions of themselves, but who are actually encouraging you to be your best self as well...

And not just encouraging you, but actually supporting you in the pursuit of your dreams.

Highly successful people seek to give as much as they can to their peers and mentors. They endeavor to help each other.

We live in a generous universe, so it's important that you and I practice generosity, and that we encourage and support others who are interested in becoming their best selves.

As you contribute your time, gifts and talents to others, you will find that others naturally want to contribute to you, too.

As you practice being a person of increase, the amount of abundance, happiness and success that you experience in your life will increase too. This is just how the Universe works.

Who is part of your Circle of Influence, who do you spend most of your time with?


I strongly recommend that you take some time to think about who you spend most of your time with.

If you are NOT spending the majority of your time with people who are highly supportive of your dreams, I encourage you to find ways to surround yourself with these types of people.

You may need to take a class, or join a program that's all about personal growth, where the other people in that class are also be interested in growing and becoming their best selves.

A number of years ago, I made a decision. I wanted to have a new female friend in my life...

I've been blessed to have experienced great friendships throughout my life. But some time ago, as a result of a few of my friends having passed away over the years, and I felt a gap in this area.

I longed to have a new female friend in my life that I could support, and who would support me also -- someone who was generative, positive-minded, success-minded, and spiritually deep. 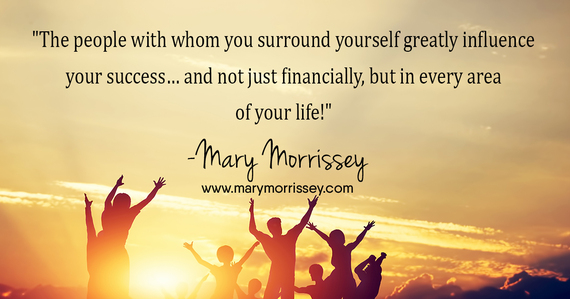 So, I put that thought out there, and began to imagine what life would be like with this new friend as a part of it. Eventually, I met a wonderful woman who has become a very close friend of mine.

For almost a decade now, I've had that new friend in my life. It's been one of the most rewarding and fulfilling friendships that I have ever experienced.

I recommend that you think about the kinds of friends you'd like to have as your circle of influence, and then reach out to someone who you know who thinks positively and is success-minded.

Join a program. Watch success videos online, then get involved and leave a comment. Someone else will leave a comment, and you might meet someone there and start a conversation. Then the two of you can talk and trade ideas and begin supporting one another!

If you make a decision and choose to pursue it, you really can have and be a part of a positive, supportive circle of influence that increases your success and happiness.