The average annual rate of productivity growth from 2007 to 2014 was revised down to 1.3 percent per year from the prior estimate of 1.4 percent, the Labor Department said Tuesday.

This is well below the long-term rate of 2.2 percent per year from 1947 to 2014--at the same time that record income inequality has impoverished so many on Main Street today. And some among the wealthiest One Percent are becoming alarmed at the inequality, the worst since 1929 and the Great Depression, and the consequent loss in productivity.

Peter Georgescu, Chairman Emeritus of ad giant Young & Rubicom and some of his hedge fund colleagues say they are.

"I'M scared'" says Georgescu in a recent New York Times Op-ed. "The billionaire hedge funder Paul Tudor Jones is scared. My friend Ken Langone, a founder of the Home Depot, is scared. So are many other chief executives. Not of Al Qaeda, or the vicious Islamic State or some other evolving radical group from the Middle East, Africa or Asia. We are afraid where income inequality will lead."

Where might it lead? "If inequality is not addressed, the income gap will most likely be resolved in one of two ways: by major social unrest or through oppressive taxes, such as the 80 percent tax rate on income over $500,000 suggested by Thomas Piketty, the French economist and author of the best-selling book "Capital in the Twenty-First Century."

The result of such a maldisribution of wealth has been slumping economic growth, as less has been invested in productive enterprises that would increase the output of workers, and more hoarded by corporations and Wall Street that have record amounts of cash holdings.

U.S Corporations have some $4.5 trillion in cash and liquid reserves here and overseas, according to the St. Louis Fed, not being used productively . U.S. Banks still hold close to $1 trillion in excess reserves with the Fed in MZM accounts earning no interest. 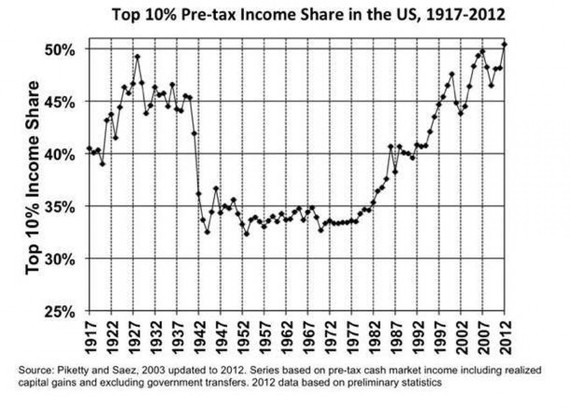 Professors Emmanuel Saez and Thomas Piketty first discovered the record income inequality that has happened since 1980, the worst since 1929, in their epic paper, Income Inequality in the United States, 1913-2002.

It was a maximum tax rate as high as 92 percent during the Eisenhower era on our wealthiest individuals that was the great wealth equalizer during the 1950s to the 1970s, before Ronald Reagan and Big Business chopped it in half that began the great shift in wealth upward, and disappearance of the middle class.

And this happened at the same time as soaring labor productivity that lasted through most of the 1970s. In fact, without such a high maximum tax rate, we wouldn't have been able to finance our freeway system, develop our space program and moon landing, as well as the Internet--all of which increased our productive capacity. It wasn't until the Reagan tax cuts that we stopped investing in those important elements that made US the superpower, and a middle class with the highest standard of living in the developed world.

We now have more than $2 trillion in deferred infrastructure maintenance, have to pay Russia to transport us to the International Space Station, and a record federal debt from the lowered tax revenues that allows little for the Research and Development that could develop new productive enterprises.

There has been a precipitous fall in capital expenditures, the expenditures that finance and develop new productive capacity, since the 1980s that no amount of lowered capital gains or corporate taxes have cured.

"Between 1900 and 2000," says economic historian James Livingston, "real gross domestic product per capita (the output of goods and services per person) grew more than 600 percent. Meanwhile, net business investment declined 70 percent as a share of G.D.P. What's more, in 1900 almost all investment came from the private sector -- from companies, not from government -- whereas in 2000, most investment was either from government spending (out of tax revenues) or "residential investment,"

"The architects of the Reagan revolution tried to reverse these trends as a cure for the stagflation of the 1970s," continues Livingston, "but couldn't. In fact, private or business investment kept declining in the '80s and after. Peter G. Peterson, a former commerce secretary, complained that real growth after 1982 -- after President Ronald Reagan cut corporate tax rates -- coincided with "by far the weakest net investment effort in our postwar history."

We lag behind even China in spending on R&D because of such trickle-down policies espoused since the 1980s, though later disavowed even by David Stockman, President Reagan's Budget Director. History shows that lower taxes have reduced, rather than stimulated overall growth since 1980. It has increased income inequality, not reduced it.

The results have been trickle-up, rather than trickle down income growth. "The fact that real wages have been flat for about four decades,: said Georgescu, "while productivity has increased by 80 percent, shows that has not been happening. Before the early 1970s, wages and productivity were both rising. Now most gains from productivity go to shareholders (and CEOs), not employees."

"We business leaders know what to do," says Georgescu. "But do we have the will to do it? Are we willing to control the excessive greed so prevalent in our culture today and divert resources to better education and the creation of more opportunity?"

Yes, we do know how to do it. It was done in earlier decades, before the advent of trickle-down economics and corporate greed that rules US today.