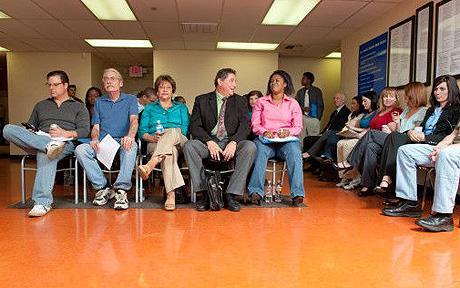 Progressives today seem to care much more about people without medical coverage than those with it. And who wouldn't? The suffering and anxiety of the uninsured is a national shame. Obamacare will, over the next decade, reduce the number of uninsured from 55 to 33 million, but the number left behind is still outrageous. Progressives should and will continue to fight for universal health care.

But most Americans today have medical insurance; they have it through Medicare, their employers, individual plans, or Medicaid. Coverage might be expensive, inconsistent or, in the case of Medicaid, downright poor, but there is coverage. The problem here isn't only that their coverage might be precarious or too expensive, but also that the care it provides -- on a human level -- often sucks, and we've gotten so used to its low quality that we don't even see it as a problem. As a result, we don't raise a political banner to address the quality of the care we receive.

Those with decent-enough coverage don't see anything in health care reform that touches them and their interests deeply enough to become active around reforming it in the public arena. And as the discussion is currently framed, they are correct, and much of the fault lies with us. When progressives seek to appeal to the values of equity and justice, they too often frame it as a way to help and rescue "the other guy," the less fortunate, the more vulnerable. Because we ignore the self-interest of those who are secure in their medical coverage, we can't galvanize the numbers of activists and voters we need to reshape a health care system desperately in need of it.

A physician friend of mine works in the outpatient department in a large hospital chain. She's allotted 30 minutes for new patients, patients who often have problems with multiple systems, and 10-15 minutes for follow-up appointments. Then she has extensive charting to do. She's paid for 8 hour but usually works 10-11. She believes her patients are, at best, maintained at their current level. The physician turnover is high and the burnout higher. Patients suffer as a result. They overuse the system and fail to comply with treatment. And all of us pay for that.

Another friend, however, who is financially well off, hired a "concierge doctor" who can afford to spend large amounts of time with his patients, make house calls, and, most of all, take time to understand his patients, form relationships with them, and to reflect on what they need. His patients got better, were happy with their care, and utilized "the system" less.

This isn't a news flash. Everyone knows now -- or should know -- that when doctors spend more time with their patients, listen to and try to understand them, their patients improve, are more compliant with treatment, and use the "system" less. And haven't all of us been frustrated by this system in small but personal ways when we've had to endure long waits in full waiting rooms or had difficulties getting through the front office to speak with our doctors by phone? And, finally, haven't most of us had encounters with doctors harried by overwork, distracted by phone calls or other priorities, and seemingly motivated to give a diagnosis, write a prescription and get us out of their office? Still, we act like we're getting care even if we're (unintentionally} disrespected along the way.

We're so used to this type of care that we think that the frustration of our perfectly normal needs for care, respect, and empathy is inappropriate and we settle for the status quo and call it "good enough."

But it's not. The informal evidence is that when we do encounter doctors or nurses who seem genuinely curious, reflective, caring and attentive, we can't stop singing their praises!

Doctors and nurses are not the problem -- some are even heroes. And we know about the greed and near-criminality of insurance companies. Moreover, we're also up in arms fighting against those political forces that want to stop health care reform for narrow political advantage. I'm not arguing that we shouldn't continue to fight to make the system provide less expensive care to those who have it, and basic care to those who don't.

But we should also fight to create a system that is caring. Activists trying to help the uninsured should also bring to the public arena a conversation about the lousy care that's offered to people with insurance -- not simply the costs or deductibles but also the ways we're diminished in so many of our everyday interactions with a system that too often treats us with indifference.

Imagine if we made people think about training and reimbursing doctors who were genuinely interested in their patients, were good listeners, offered empathy and support along with medication, and took the time needed to provide comprehensive care? Many medical and nursing students enter their fields to do just that, but are ground down by debt and external institutional necessities to give up on that ethic.

I think that if we stood up for caring and not simply more access to care, we might engage the unengaged, and give everyone a stake in creating a better health care system. We would also be challenging the prevailing cynicism in our culture and within the progressive movement about talking about anything other than equity and economics. While vitally important, people have a need for caring providers and environments when they're sick, not just access to a system that treats the body but neglects the heart and soul.

Psychologist and psychoanalyst in San Francisco