"I'm getting a little jealous of James Garner," my wife informed me as I headed down the basement with my burned DVDs. I was in the middle of a bit of binge-watching a few months before Netflix appeared on our horizon. It involved setting our DVR for a series of old Maverick episodes on the Starz Western channel.

I'd finally figured out how to burn a bushel of the episodes to a DVD and was taking them downstairs to put by the dusty exercise equipment to induce me to get hooked on a show and lose pounds at the same time.

I knew the Maverick theme song years before I finally saw one of the old episodes...

My dad and his brothers-in-law were children of the fifties and grew up with the Lone Ranger, Gene Autry, Roy Rogers and the romance of the West that was echoed so beautifully in the love affair with the Red Rider BB gun in A Christmas Story.

But my first introduction to James Garner wasn't in a stetson, but in a beat up old RV on the beach. Jim Rockford had the great gold Firebird, the great ocean-front property and in The Rockford Files he got beat up and arrested enough times, but it seemed to a 12-year-old a pretty glamorous lifestyle.

But like Maverick, Garner had the great fortune to have an outstanding opening song with a great teaser of different voicemails (echoed in the various chalkboard punishments for Bart in The Simpsons). Thanks to YouTube's Mick2090 who edited together Season One's opening messages...

Garner's folksy, relaxed manner -- even on an answering machine message -- was his calling card. I was hooked on the crime drama and when my dad suggested I stay up late one night to see the Channel 20 movie one Saturday night to watch one of his favorite films, I was very happy to see Garner in The Great Escape -- like seeing an unexpected friend at a reunion. In this scene, his character, "The Scrounger" prepares Fourth of July moonshine to share with the non-Yanks in the prison camp.

Steve McQueen, at the time, already had such an ego and well-beyond being part of an ensemble cast that he insisted on having most of his scenes shot with only a few other actors -- thus the motorcycle stunt, etc.

But Garner was a scrounger in life as well. He had to leave Maverick under tough circumstances and received many broken bones for his own stuntwork on Rockford. But like Bill Cosby and Jell-O, he discovered a natural talent for advertising as Mariette Hartley and Polaroid became his most successful co-stars.

I'm not sure I ever saw Garner not playing Garner. Nor did I ever really want to.

In the Blake Edwards hit, Victor Victoria, he plays usual the man's-man that made Cary Grant and George Clooney so popular with both genders. But add in the ingredients of him as a gangster who has certain homophobic leanings that somehow can't stop him from falling for Julie Andrews' female-impersonating "Victor."

And he even aged well. In college, I took a date to see Murphy's Romance, when again he played a folksy-towny who cannot stand the young moron who has returned to ruin the life of Emma (Sally Field) and her young son.

At the end of the film, he confesses to Emma that he's 70, but she doesn't care and neither do we.

Finally, he spanned his third generation of fans -- from my father and uncles to my daughter and every female student I've had for the past ten years, in 2004's The Notebook with his wrenching "I'll be seeing you."

Four important men in my life were taken far too early -- my father, Jim, in 1997, his brother Bob in 1985, Dad's buddy Rick Olshove in 2005 and my Uncle Tom just four days ago. All had a wonderful sense of humor and loved to laugh -- especially at themselves. Rick's was perhaps most like Garner's characters -- very dry, a bit caustic but pretty unconditionally accepting. (My favorite Rick-ism was "Whatever!" when faced with a strange turn of events.) 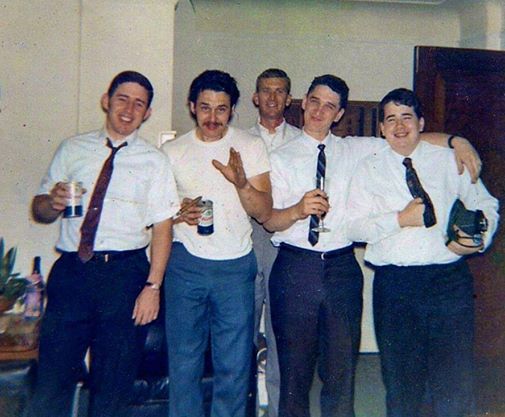 My dad in the back behind my mom's four brothers, John, Larry, Tom and Joe.

When my sister Katie was married in 1996 in northern Michigan, we had a big campfire and Uncle Tom produced stetsons for all the cousins and uncles who joined in a rendition of "Ghost Riders in the Sky" along with many other western themes. I suspect that "Maverick" was also sung. In the air was total acceptance, joy of the moment and each other's company.

Perhaps with the loss of an omni-presence such as Garner's in my life feels as sad and empty as the loss of Jim, Bob, Rick and Tom.

Perhaps the still shot of his smiling upward gaze from the titles of The Rockford Files' (with his dad "Rocky" in the background) summed up Garner and the ironic, but still hopeful, perspective that he instilled in many of us.

Perhaps that was Garner's greatest role -- not just every-man, but every-friend.