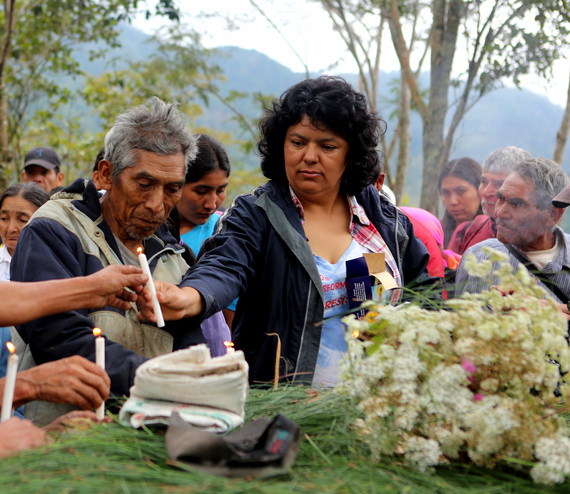 In the early morning hours of March 3, our long-time partner and friend Berta Cáceres was murdered in her home town in Honduras. In the past few weeks, the leader of the indigenous Lenca people and the Civic Council of Indigenous and Popular Organizations of Honduras (COPINH) had been repeatedly threatened with her life for her opposition against the Agua Zarca Dam on the Gualcarque River. Three years earlier, her colleague Tomás Garcia had been killed at a peaceful protest against the dam by an army officer at close range.

We don't know who fired the bullet that killed Berta Cáceres. But we need to call out the actors who share a moral responsibility for the murder of our friend and partner:

•the Honduran government, which leads the country with the world's worst track record of environmental killings, and which did not protect Berta Cáceres even though it had been ordered to do so by the Inter-American Commission of Human Rights;
•the dam builder, Desarrollos Energéticos S. A (DESA), which has close contacts with the country's security forces and has orchestrated an intimidation campaign against Berta Cáceres in recent months;
•and finally, the Central American Bank for Economic Integration (CABEI), FMO, Finnfund and Voith-Siemens, the funders and corporations which underwrite the Agua Zarca Project with their loans and equipment contracts.

How have the different actors responded to the murder of Berta Cáceres? The Honduran police reportedly tried to present the killing as a botched robbery, an effort both helplessly ridiculous and outrageous. The dam builder also asserted that "there is no direct or indirect connection between the project and the unfortunate event that has ended the life of the indigenous leader."

FMO, which is controlled by the Dutch government and has invested $15 million in the Agua Zarca Dam, expressed deep regret over "the passing away of Berta Cáceres", and emphasized that it tried to "engage all involved parties" through dialogue and consultation. Finnfund, which invested $5 million in the project, didn't mince word and (if we are to trust Google translation) "strongly condemned" the murder as a "shocking crime." Even so, a company representative called "a connection between the project and the murder (...) highly unlikely." CABEI, which is funding the dam with $24 million, and Voith-Siemens, which is supplying the turbines for the project, have so far remained silent about the case.

COPINH, the indigenous movement which Berta Cáceres had founded, didn't buy the obfuscation by the Honduran police and the dam builder. "We know very well who murdered her," the movement said in a statement on March 3. Calling out the Honduran government and the companies and financiers that are backing the Agua Zarca Dam, COPINH concluded that "their hands are stained with indigenous blood and with the blood of the Lenca people."

The Agua Zarca Dam is a relatively small hydropower projects. At the outset, development financiers such as CABEI, FMO and Finnfund may well have hoped to create benefits for the local population through access to electricity, jobs, and other infrastructure investments. Yet the project did not receive the free, prior informed consent from the local indigenous people that is mandated under an ILO Convention that Honduras has ratified. The Lenca people, for whom the Gualcarque River has an important agricultural and spiritual value, vigorously protested against the project and blocked construction for several years. As a result, the dam builder militarized the region, and in July 2013, Berta's comrade Tomás Garcia was killed.

Remarkably, the Chinese dam builder Sinohydro, which had received a contract to build the Agua Zarca Dam, pulled out of the project after Tomás Garcia was killed. "Right from the very beginning," Sinohydro stated, "it was noticed that there were serious interest conflicts between the Employer of the Project, i.e. DESA, and the local communities, which were treated as unpredictable and uncontrollable to the Contractor."

CABEI, FMO, Finnfund and Voith-Siemens remained involved in the project in spite of the mounting repression. They either didn't stand up for Berta Cáceres when her life was publicly threatened, or their interventions were ineffective. If they ever tried, they have to recognize by now that they can't stop the deadly violence that the Agua Zarca Dam has unleashed. By pulling out of the project, they can honor Berta Cáceres' ultimate sacrifice and show the powers behind her murder that for once, an environmental killing in Honduras is not paying off.