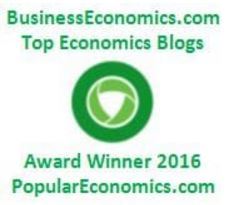 It's becoming clear that our Middle Class--the midsection of U.S. earners and consumers--has shrunk alarmingly. And this is the main reason for the political polarization today that in the words of journalist Christopher Hedges, has driven the Republican Party "insane".

Our society has become so polarized that Donald Trump needed the support of the Ku Klux Klan, white nationalists, and Vladimir Putin to become President-Elect. Whereas it has been such middle class values of probity, honesty and science, first satirized in Moliere's Le Bourgeois gentilhomme, (The Middle Class Gentleman), that has been the stabilizing influence in American politics since WWII.

The main difference between poverty and middle class and between middle class and wealthy, noted one researcher, "is belief in, and planning for, moving up as a working assumption." A report from the Pew Research Center found that, for the first time since the 1970s, families defined as "middle income" are actually in a minority in the US - squeezed from both ends by an enlarged poverty-stricken group below them, and an enriched group above them. 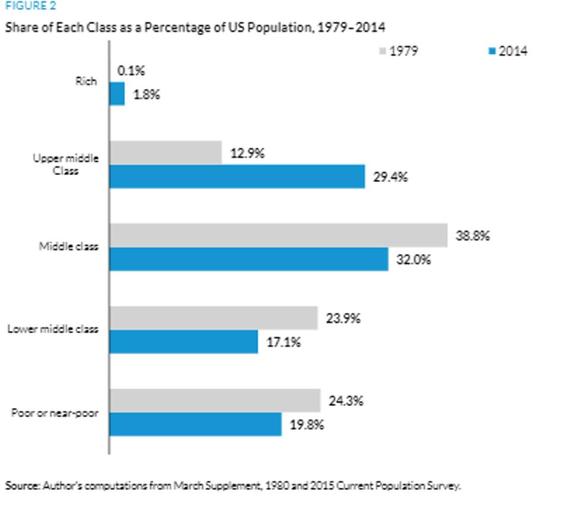 This graph shows the shrinkage of those defined as middle class from 1979 to 2014 -- from 38.8 percent (gray line) to 32.09 percent (blue line), according to a Pew research study. The shrinkage reads like a textbook example of the future that French economist Thomas Piketty predicts for the world in his best-selling, Capital in the Twenty-First Century. In 1971, there were 80 million households in the US defined as middle income - compared with a combined 52 million in the groups above and below. Now, there are 120 million middle-class families, but 121 million rich and poor - "A demographic shift that could signal a tipping point," says Pew.

So who or what is at fault for the result; record income inequality last reached in 1929 that led to the Great Depression? We can fault President Reagan, who was first to break the unions with his firing of all federally employed Air Traffic Controllers that belonged to PATCO, the traffic controllers union.

Or, conservatives' espousal of the Reagan motto, "government is the problem," which caused massive downsizing of government regulation, as well as regulators, as well as the ensuing de-regulation of whole industries, such as the airlines, telecommunications, and financial markets.

But the truth may be much closer to the present -- in fact, from the Presidency of Bill Clinton. For it was President Clinton who veered so far to the right in his 1966 reelection campaign (thanks to Republican strategist Dick Morris) that he preempted the Republican platform by continuing to deregulate the financial markets with the repeal of the Glass-Steagall Act that separated FDIC depositor-insured banking from higher risk investment banking, financing the addition of 100,000 more police to combat the drug epidemic, and downsizing poverty programs with welfare reforms that took tens of thousands off the welfare rolls, which required them to take low-paying menial jobs to receive even a limited amount of financial support.

The Republicans, as Chris Hedges said, were thus driven politically insane. They no longer had those bread and butter issues (such as law and order, smaller government) that were once their own, which led to formation of the Tea Party, and a new political civil war declared on Big Government ruled by the northern elite that had ruled for so long. It was our 150 year-old Civil War taking a new form, in other words, but with almost the same mix of combatants.

Hillary Clinton, unfortunately, wasn't able to break away from the Clinton mix of conservative economics (e.g.,balancing the federal budget) and social liberalism that resulted. The culture wars against abortion, civil rights, and welfare (including Obamacare) were the only issues the Republican Party had left. The result was and is President-elect Trump, an ideologist of neither party. Trump is an advocate of no government, where possible, who can count on the loyalty of only his most trusted associates and family.

Sound familiar? It is politics of the tribe, the close=knit family, held by gangsters and Oligarchs, with everyone else to be treated with obfuscation and outright deceptions.

Even more significant is the record inequality since 1979, resulting from the loss of those policies that built up the middle class after WWII, policies from the New Deal, such as social security and Medicare, entitlements, unionization of whole industries, leading to the unparalleled prosperity of the 1950s and 60s.

So let us hope a majority of our politicians realize, as a majority of Americans still do, that our prosperity and stability rest on a middle class that hasn't given up hope for a better life.