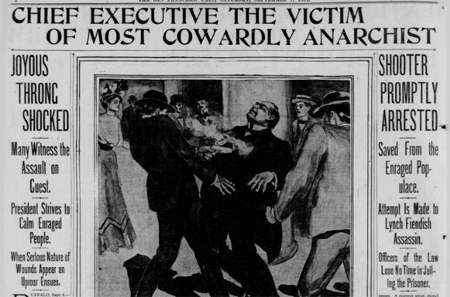 The news that rocked the nation

It is only now 112 years since President WIlliam McKinley was assassinated in Buffalo, New York, but the event still captures the imagination of all Americans.

Was there a conspiracy? Was there a 'second gunman' on the grassy streetcorner?

Only last month The Atlantic and Time magazine devoted their entire issues to William McKinley and 'The McKinley Mystique'.

And, of course, there are numerous works of fiction imagining what America, and indeed, the world would have been like if only McKinley had lived.

It's JFK we're talking about.

Kennedy, who was assassinated 50 years ago this November 22.

Don't worry. If you forgot, endless TV and newspaper and magazine and online (I am sure) specials will remind you. Not to mention the books.

Fifty years ago is a long time.

Most Americans were not even alive when it happened. In his three years in office, JFK actually did not accomplish all that much (unless you consider bringing the world to the brink of nuclear annihilation in the Cuban Missle Crisis an achievement). Lyndon Johnson accomplished FAR more.

Why does Kennedy still capture the imagination? Why do programs like CBS This Morning continue to run Kennedy memorobilia shows, dragging out the last surviving remnants of anyone who can even remember even meeting JFK?

It was the assassination.

And the Zapruder film.

(P.S. CBS This Morning actually ran an interview with Abraham Zapruder's granddaughter. Now, what in the world could she possibly have to contribute to any discussion?)

The only other thing that has so captured our collective imaginations (and pocketbooks) for so long would be the Titanic.

And both events are almost the same thing -- The Assassination in Dallas and the Sinking of the Titanic.

They are both the same thing because they were both intersections of media events and a new technology.

When the Titanic struck an iceberg in 1912, the ship began to send out an SOS on the then very new technology of radio.

In New York, 16-year-old David Sarnoff (soon to become the founder of both RCA and NBC), was working for the Marconi company and picked up the distress signal (or so his self-serving autobiography claims -- no matter).

As the ship went down, massive crowds gathered not in front of the New York Times building, but rather in front of The Wanamaker Department Store window where the Marconi Company had installed young Sarnoff. The rest is history.

The sinking of the Titanic was the first 'live broadcast' tragedy. The first time people got to 'experience' a national (global) tragedy in real time, as it happened.

Today, we accept this as a given. When something happens anywhere in the world you can turn on CNN and watch it as it progresses. But in 1912, this was something entirely new. That kind of thing leaves its mark.

The same is true of the Kennedy assassination. TV was in its infancy and for the first time, Americans were able to follow the assassination (and subsequent events) as they happened. In real time. Right down to the live broadcast of Jack Ruby killing Lee Harvey Oswald. Live! On TV!

The Zapruder film only confirmed the 'visual -- you are there' aspect of the killing.

Abraham Zapruder and his 8mm Bell and Howell camera.

Were a president to be shot today on a main street somewhere, it would be 'filmed' by thousands of people on their smart phones and webcast and Instagrammed instantly.

That's the next 'big event' that is waiting to happen. The next 'thing' that will become a touchstone of our culture.

In the meantime, for all of you under the age of 60, JFK was our first 'television' president. Young. Good looking. Funny. Entertaining. All the traits you need to be a great president.

William McKinley was none of those.