It's like something out of a twisted, hi-tech superhero movie. A group of three women called the LadyCoders, led by Tarah Wheeler Van Vlack, join together to help women get jobs in a male-dominated tech world. While doing so, their website is hacked and they get blasted on the blogosphere. But they band together and fight back with sharp tongues and LinkedIn Diagrams. No, this is not the newest cable drama -- this is live and unfolding right now.

When I first talked to Van Vlack online over Google Hangout, she was sitting in a hospital cafeteria waiting for her husband to get off work. She was fervently discussing the importance of the group's mission -- so much so that a stranger actually handed her a note during our interview that said: "You inspired me, thank you."

And that's the thing about Van Vlack and the Lady Coders -- they are inspiring.

They are doing something that most people just talk about: helping women get jobs in the tech field. It's not sexy, it's not glamorous, but it's a problem and it's getting worse. The number of women working in professional computing jobs actually dropped 8 percent, to 25 percent, from 2010 to 2011, while the number of men climbed 16 percent, according to the Bureau of Labor Statistics. But the LadyCoders are trying to change that.

The group raised over $25,000 on funding platform Kickstarter to produce an instructional video of sorts for women to break into the world of technology. After 100 hours of raw footage, they have whittled it down to a version they can present at their "Rocket Propelled Careers" seminar in New York on Feb. 23. 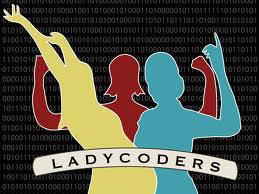 Sounds great, right? Experienced professionals doing their part to help the next generation get a leg up? Well, the idea hasn't exactly been greeted with open arms among the blogosphere community. The LadyCoders are facing backlash from feminists, who want them to change the system instead of teaching women how to adapt to the male dominated environment. In fact, many have been downright hostile, taking issue with the LadyCoders marketing materials.

One particular statement set some people off: "Men don't deliberately keep us out; it's our job (for now) to be easily integrated into an all-male team, nonthreatening, and hyperskilled." A flurry of Twitter comments resulted such as "you're telling me it's my job to be non-threatening rather than a man's job not to be threatened by me?" Shortly after that, the LadyCoders website was hacked and taken down temporarily.

The statement has since been modified and the LadyCoders are trying to get back to their initial mission: helping women get tech jobs. "We're the only ones providing this kind of training," Van Vlack said, "This is the class you didn't get in college."

The training Van Vlack mentions includes teaching women how to talk to hiring managers, navigating the return to the workplace after maternity leave and juggling a career while nursing. These are real issues that not only plague the tech industry, but most other industries as well. The LadyCoders are also trying to offer women a support system in an industry that has very few women in the C suite.

In fact, only 9 percent of U.S. Chief Information Officers (CIOs) are female, down from 11 percent in 2011 and 12 percent in 2010, according to a survey of 450 IT leaders by Harvey Nash Group. Also, about 30 percent of those polled said their information technology (IT) organization has no women at all in management. Ironically only about half of survey respondents consider women to be under-represented in the IT department.

According to that study, it seems that companies not only have a woman problem, but for many, the lack of women in management roles is not even on the radar. The LadyCoders take issue with that, especially when they believe that companies are fudging these statistics.

Van Vlack recently responded to a post by the social media analytics company Klout, which claimed that 30 percent of their employees were female. Van Vlack questioned the post asking: "Congratulations on having an over 30 percent female workforce! Could I find out from you how many are software engineers or web developers?" She told me her post got edited and so she hit back.

She went on LinkedIn and found everyone that worked at Klout and built a diagram showing the ratio of men to women. Turns out, (according to the LinkedIn data she gathered) 15 out of the 16 women that work there are in PR or marketing; only one woman is in an executive role. 15 -- Love, Van Vlack.

Why are women underrepresented at the management level? According to a study by the National Center for Women in Information & Technology, fifty-six percent of women in technology companies leave their organizations at the mid-level point (10-20 years) in their careers. (That is much higher than other industries such as law, where 30 to 45 percent of women leave mid-career). Catherine Ashcraft, the senior research scientist who authored the report, says that that women are discouraged and leave for a wide range of blatant and subtle reasons including unconscious bias and gender pay gaps.

"Other factors that women point to for leaving the IT workforce include isolation, lack of role models and mentors, poor supervisory relationships and competing life responsibilities," Ashcraft said. "If these trends continue, by 2018 the U.S. tech industry will only be able to fill half the available IT jobs," says Ashcraft.

The LadyCoders are taking these issues head-on in their seminars. The group has drained their funds to put on the seminar in New York and are scrambling to get sponsors.

"There is an amazing community of people out there in the trenches who are profoundly grateful for what we're doing," Van Vlack said. "Technical women, technical men are congratulating us everyday, thanking us for what we're doing. They're the ones that get to see the benefit of this training -- the ones who get to see the real changes that we're bringing about and the companies that are getting formed as a result of LadyCoders seminars."

I think what the LadyCoders are doing is bold. But creating change in an industry that has gotten comfortable being predominately male isn't accomplished overnight. And, because there are so few women at the top in IT companies, it makes it harder to draw more women into senior roles. This becomes a self-fulfilling prophecy -- likely the reason why the numbers are getting worse instead of better. I just hope that all this Internet drama doesn't sidetrack the purpose.