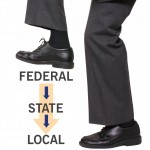 Who should make decisions affecting the health and safety of our communities? Who governs? Conservative Republicans in Texas are split on the question. Darren Hodges, a Tea Party councilman in the West Texas city of Fort Stockton, fiercely defends his town's recent decision to ban plastic bags. City officials have a "God-given right" to make that decision he tells the New York Times.

James Quintero of the conservative think tank Texas Public Policy Foundation disagrees: "What we're arguing is that liberty, not local control, is the overriding principle that state and local policy makers should be using." He apparently would strip communities of the right of local control, at least to regulate commercial behavior. Quintero is Director of TPPF's Center for Local Governance. Perhaps they should change the "for" to "against."

The new Republican Governor of Texas, Greg Abbott, stands with Quintero. In a speech last month to the TPPF, he condemned how democracy run amok threatens Texas with becoming "California-ized." "Large cities that represent about 75 percent of the population in this state are doing this to us," he declared. Huh? Who does Abbott think are "us?" Might not 75 percent of the population more accurately be described as "we the people?"

Despite the Governor's comments, the debate about local authority in Texas appears vigorous.   The demise of local democracy is, by no means, foreordained. About a dozen Texas cities already banned plastic bags before Fort Stockton. The Times reports that many Texas cities restrict texting while driving. Twenty Texas cities approved identical ordinances that curb the interest payday lenders can charge.

In other Republican states, the debate has been far less robust and public. In state after state, a clear pattern has emerged. Cities legislatively address a local problem. Big business complains. State legislatures clamp down. And, as Republicans become more conservative and gain control of more state governments, the pace and intensity of those clamp downs have increased.

Nineteen states currently preempt local minimum wage laws: Half of these laws were enacted in the last five years. Nineteen states restrict or abolish the right of communities to build municipally-owned broadband networks. At least five states have preempted local regulation of e-cigarettes.

These efforts to circumscribe local authority often have been led and coordinated by the non-profit conservative organization, the American Legislative Exchange Council (ALEC). ALEC insists it does no lobbying.

Consider ALEC's role in fostering state preemptions of municipal ordinances demanding that private businesses offer employees sick leave. A few months after Scott Walker shepherded a bill through the Wisconsin legislature in 2011, repealing a Milwaukee sick leave law approved by a 2008 ballot initiative supported by 69 percent of the voters, ALEC allegedly passed out copies of the bill at its annual meeting. Legislators were reportedly handed a target list and map of state and local paid sick leave policies. In the next three years, 10 more states had replicated the Wisconsin law. (In the next few weeks, Missouri may become the 11th.)

The fight for sick leave is in city councils and state legislatures because Congress continues to refuse to act despite polls that find more than 80 percent of Americans, including 70 percent of Republicans, approve mandatory sick leave laws. Will states allow cities to reflect the popular will?

2015 may be a pivotal year. Mark Pertschuk, director of Grassroots Change explains, "The debate over sick leave this year may turn into a race to see if advocates can build enough awareness and support for such laws before legislatures that oppose the benefit act to ban them."

Sometimes, courts will step in to protect local authority from state tyranny. After the federal government abdicated responsibility for regulating the fast-growing fracking industry, communities began to step in. Pittsburgh became the first to ban fracking within city limits. The Pennsylvania legislature stripped it of the right to do so, but the Pennsylvania Supreme Court reinstated Pittsburgh's authority. New York courts also have upheld local authority over fracking. The resulting proliferation of cities and counties banning fracking in New York ultimately persuaded a reluctant Governor Andrew Cuomo to impose a statewide ban in 2014.

On the other hand, after the citizens of Longmont, a suburb of Denver approved a ballot initiative to ban fracking, the Colorado Attorney General sued and a Colorado court overturned that law. (Longmont is appealing.)

Overall, it is highly unlikely the judiciary will prove an ally when communities attempt to exercise their authority in the face of state opposition. The U.S. Constitution does not mention municipal corporations. U.S. courts have given states very wide latitude to limit or even eliminate local authority. In one admittedly extreme example, in 1907, the U.S. Supreme Court upheld the power of the Pennsylvania state legislature to consolidate the city of Allegheny into the city of Pittsburgh, against the wishes of the majority of Allegheny residents.

The reach of local authority will be fought in the political arena, not the courts. Regrettably, but understandably, the fight may be viewed as partisan because the election map, increasingly, is comprised of red states and blue cities, at least larger cities.

Today, Republicans control 24 states outright, and a record 69 state legislative chambers. But in 2012, 27 out of the nation's 30 most populous cities voted Democrat.  Every one of Texas' major cities -- Austin, Dallas, Houston and San Antonio -- voted Democrat. Other blue cities in red-states include Atlanta, Indianapolis, New Orleans, Birmingham, Tucson, Little Rock and Charleston, S.C. In states like Nevada, the only blue districts are often also the only cities, like Reno and Las Vegas.

Josh Kron in the Atlantic bluntly and observantly writes: "The voting data suggest that people don't make cities liberal -- cities make people liberal." I think he's right, but the fact is that thousands of smaller cities vote Republican, and they can and should be strong allies in any fight to defend local authority.

Fort Stockton, for example, has a population of only 8,400. When Colorado enacted a ban on municipally-owned telecommunications networks, the legislature also allowed for an exemption if voters approved a network through a referendum. Last November, seven cities and one county overwhelmingly voted for publicly owned networks. Voters in each just as lopsidedly elected Republican legislators.

Certainly, those who believe in state rights should even more strongly believe in local rights. Local government is the most accessible and accountable of all governments, the most responsive to the popular will. Alexis De Tocqueville described local government as "the great school of democracy." If we don't like what our city councilors or county commissioners do, we can vote them out of office. That is not very difficult. Most serve for only two years, and while money certainly matters in local elections, it is not determinative.

The primary justification used by those advocating for is the need for uniformity. A hodgepodge of local laws burden business (or at least big business). Gordon Lafer, an associate professor at the University of Oregon's Labor Education and Research Center points out the hidden refrain, "We want a state standard, and the state standard should be nothing,'"

In any event consistency is a poor excuse for undermining a fundamental principle of democracy.  Indeed, one of the compelling reasons for allowing local control is the resulting diversity of practice and the innovation and learning experiences that result.

Even the argument that local ordinances burden business is suspect. Tobacco companies pioneered the use of state preemption in the mid 1980s when cities began demanding smoke-free restaurants (or smoke-free sections of restaurants). Tobacco companies argued that such ordinances would hurt business. Thirty years later, almost all states that preempted local laws now boast their own statewide smoke free laws, and restaurant revenues have not been negatively affected, while the medical and economic benefits to the nation have been immense.

As I mentioned, 19 states now prohibit their localities from raising the minimum wage, but in the last year big box stores, like The Gap, TJ Maxx and Walmart, have announced they will voluntarily pay above the minimum, and justified it as a wise business decision because it will reduce turnover and absenteeism and raise worker productivity.

The arguments for stripping people of their right to protect and enhance the health and vitality of their communities are weak. They reflect a fundamental distrust in the intelligence and capacity of the American people. Whether one supports or opposes plastic bag bans, or mandatory sick leave, or fracking, or texting while driving, one should support the right of those most intimately affected by the issues to debate and decide on the issues.