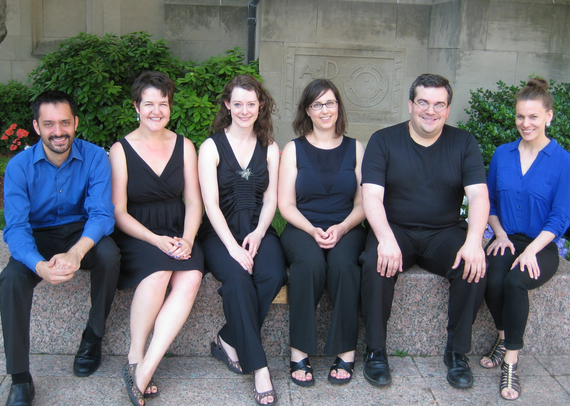 The audience has found their seats in the concert hall, the orchestra has tuned up and sits silently, and then the moment everyone's waiting for suddenly occurs.

A stagehand invisible to the audience opens a side door on the stage and the conductor, resplendent in formal attire, strides regally to the podium, accepting, God-like, the worshipful applause and cheers of listeners and performers alike.

He (and it's almost always a "He") dramatically casts his gaze on various sections of the orchestra, raises his baton, the music starts, and within a few moments, everybody in the hall sags a little bit.

That's because the focus is on the conductor, not on the music.

So who says you even need a conductor?

That's the position taken by a relative newcomer to the Boston music scene, Gran Harmonie, a group of musicians who play, conductor-less, as a "wind band" -- an approach to composition and performance highly popular in the 18th and 19th centuries and, until recently, out of fashion today.

The "out of fashion" part is unfortunate, because some of the world's greatest composers -- Mozart and Berlioz come to mind -- created music specifically for such ensembles, and those pieces seldom find their way to the stage.

Gran Harmonie, embarking on its fourth season, comprises wind and brass instruments and they've got Mozart on their minds.

Gran Harmonie doesn't just play classic pieces that delight audiences; they play them on period instruments, to give audiences a much truer sense of how the music sounded to the composers and listeners hundreds of years ago.

Just to keep things straight, Gran Harmonie is the group; Mozart's Gran Partita is the piece they'll play in Cambridge.

The conductor-less evening-length work features seven movements which range from light and playful to deep and introspective.

Music and movie lovers will recognize the Adagio from the piece as the moment in Amadeus when the composer's rival, Salieri, recognized Mozart's genius.

The group does a lot more than just Mozart. Gran Partita functions as a full symphony orchestra, an opera orchestra, a mixed chamber ensemble, a Harmonie band, and as soloists in salon-style recitals. If it's primarily wind and brass, Gran Harmonie's on it.

The group even does improvisation on period instruments, which makes it unique among classical performers.

Gran Harmonie not only performs classics; its members also rack up all kinds of frequent flier miles. The group has given performances and master classes in locations as diverse as Harvard University, The Longy School of Music of Bard College, NYU, the University of Washington, and Palm Beach Atlantic University.

"We believe that performing music without a conductor," says Elisabeth Axtell, a cofounder and performer with Gran Harmonie, "puts the emphasis back where it belongs - on the music itself. That's what we strive for in every performance."