Until I had hopped into a shabby, hand-me down chevy with four German Au Pairs to road trip from our then-home Sydney, to Cairns, I was naive to the glory of Australia's National Parks and beaches.

A beach is a beach ... right? Sorry I wasn't sorry -- it just didn't sound that special.

As a southern California native who has lived in Barcelona and Rio, beach cities sit as a prerequisite to my residential preferences. Of course, I love the beach, but I want more than that out of my travels. Admittedly, I had no rush to visit Australia. Long-term work and holiday in Oz felt like a practical, feasible destination for expat life... but just visit Australia ... nah!

Like many travelers, I'd been drawn to "exotic" destinations. I glorified foreign natural wonders -- Machu Pichu, Iguazu Falls, Patagonia and the Amazon. I preferred Thai food, tigers, temples and elephants like those of Chiang Mai, Siem Reap and Halong Bay. I was enticed by Cyprus, Turkey, Serbia, Croatia, Hungary, and Romania. But another free-land of English-speaking, Billabong-wearing, fist-pumping, dirty-blondes was going to be everything I had in the City of Angels.

I avoided the Land of Oz, the UK, Canada and the U.S. like a plague of boredom. They didn't meet my standards of scream-out-loud adventure and cultural curiosity. Just quietly, I was an "exotic" destination snob. In fact, so comforted was I by the Aussies I'd met over-seas while traveling, that my one-way-ticket Down Under had been presumed as a safe choice -- a calculated risk.

I type away with the noted shame at my once unsophisticated, callow -- even ignorant -- portrayal of Westernized vacation destinations. We have romanticized bucket-list checks of swimming with elephants and trekking one-hundred-and-sixty-foot glaciers to the point where the average traveler frames Instagrammable sights a la "hit it and quit it." I only spent two days at Iguazu Falls, two days at Halong Bay, and perhaps a weekend at Machu Pichu. Given financial limitations and windows of allotted free-time, there is some reason to the madness of taking a shot and moving on to the next one like a bachelor at a strip club.

And whist I will not discount the value of exploring cultures alien to that of our own, we do not have to step too far from our comfort zone for a new vantage point to the world. This, I learned living and traveling in Australia.

Between teaching Sir-Mix-A lot lyrics via sixteen hour drives, catching shooting stars while sailing and setting ourselves up for a scenic sunrise, Australia became more than a safe haven of people I love. Nine-months Down Under, four caravanned road trips later, and I can earnestly say, that Australia's natural beauty is as extraordinary as its loving, interesting, fun-loving people. I love the land as I love its peeps!

1. From Melbourne, Victoria -- Onto The Great Ocean Road. 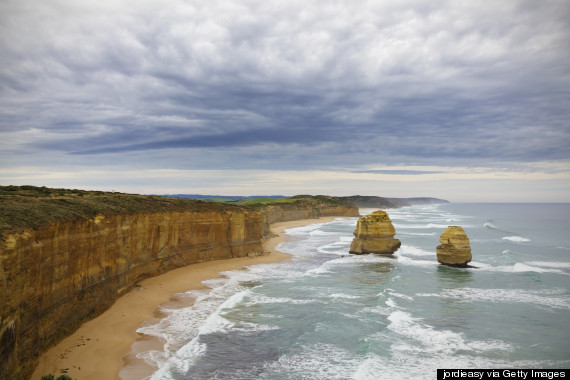 A jagged coastline with a collection of scattered islets, the Twelve Apostles is a unique wonder. En route from Melbourne, Australia's most European city: characterized by street art, hipsters and coffee shops. I leaped for the love of Bells Beach, Bay of Islands and Port Fairy. 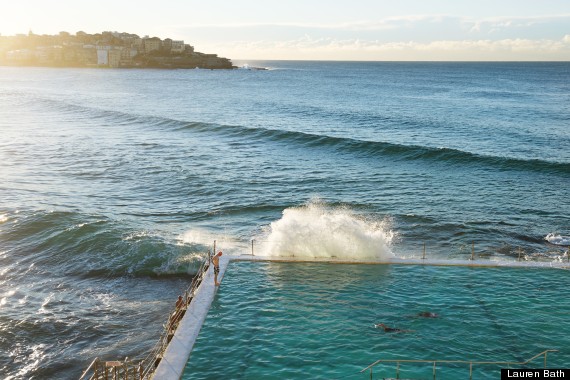 Strolling along sunny Coogee's shores, I too often catch a live band at Clovelly or BBQ at Tamarama. Dip into celebrity renowned Bondi, or dance at one of many Sydney harbor bars and lounges. Alternatively, a Sunday pub crawl in the Northern Beaches of Manly have me saying "my shout." 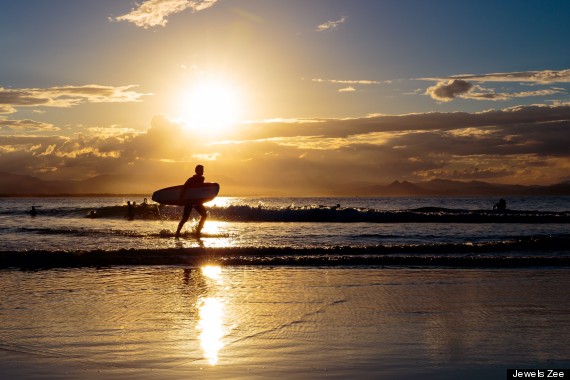 Chillin' for the killin' Byron Bay is your go-to for a surf before some fish and chips. Low key with a Corona-and-lime vibe, the Aussie beach of Byron, is a haven for wave riders. Shockingly -- unlike the Vegas spindrift -- Surfer's Paradise. 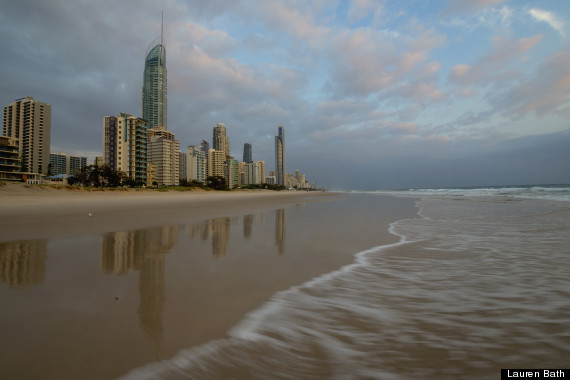 While Byron's Bay is an aquatic boulevard for paddle boards, surf and starfish, Surfer's Paradise resembles Sin City, Cabo and Miami. Shop, drink, gamble and dance after a morning of sun-baking. 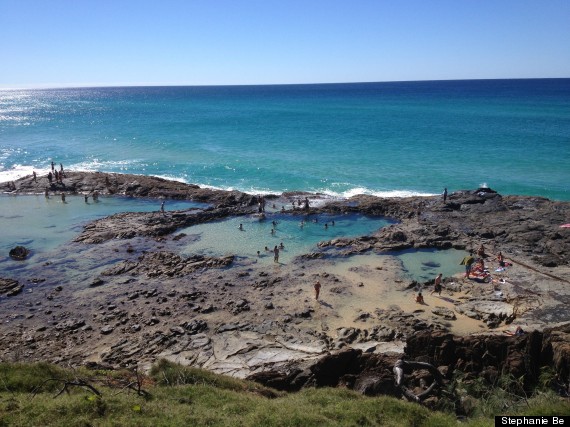 The Champagne Pools of Frazer Island

Take a ferry to Frazer Island, for a rain-forest beach escapade. A photo would deceive you to think we were in the Sahara Desert. The Champagne Pools, the Maheno Shipwreck and the Indian's Head Cliff over-looking Happy Valley's majestic beach left me wanting for more. 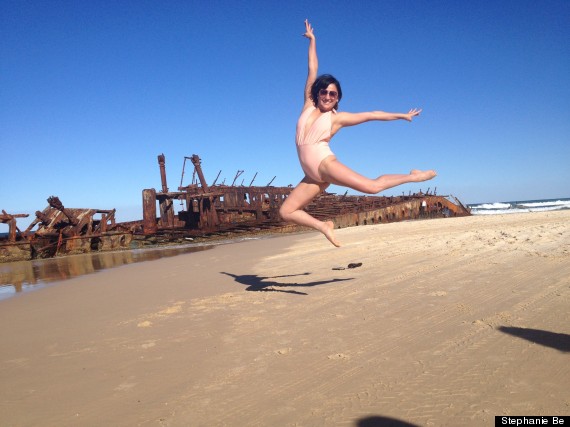 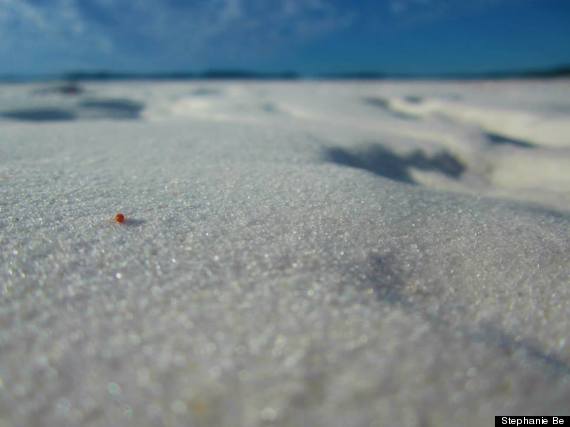 Sailing, snorkeling, and allowing the glow of the sun to kiss our skin, we embarked on the Avatar -- a former race boat turned sail boat -- for our Whitsunday Islands tour. Greeted by a skipper and deck-hand who looked like modern pirates, we made way to the silica sand beach of White Haven National Park.

6. Cairns And The Great Barrier Reef 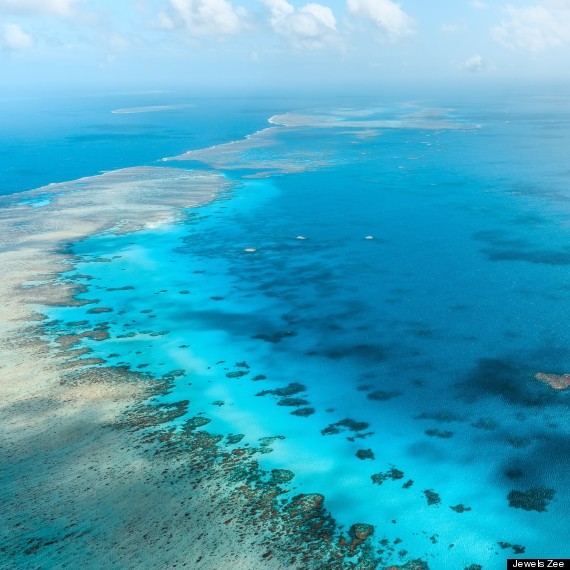 With beauty so grand, a self-imposed a "you're not going to not dive the Great Barrier Reef" enabled me to over-come my greatest fear -- drowning. Cool Cairns and deep dives wrapped up an experience of a life-time!

A version of this piece originally appeared on TravelBreak.net

More TravelBreak Posts:
14 Aussie Phrases Americans Should Start Using
5 Reasons to Move to Sydney or at Least Visit Before Tearing Yourself Away (Photos)
Expat Life: The Difference Between Traveling and Moving Abroad